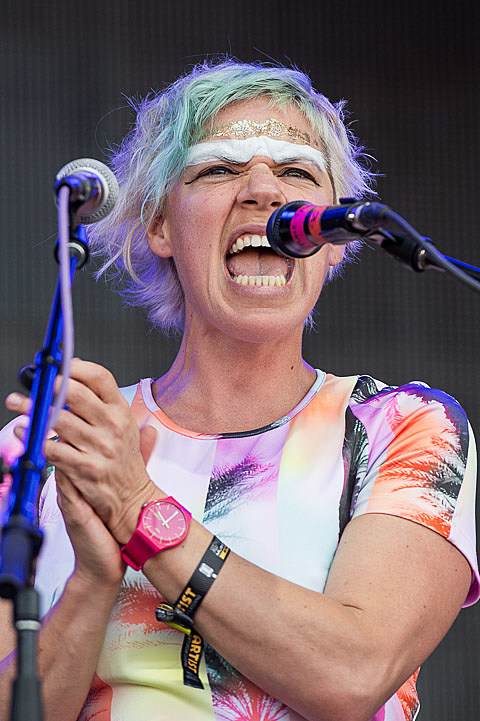 Strand of Oaks @ Ace Hotel (5 PM)
Strand of Oaks made the switch from a somber folk singer to an upbeat folk rocker this year and it's boosted his career more than ever before. Last night the band played their biggest NYC show yet at Bowery Ballroom and tonight they hang around for a free one, part of Ace Hotel's 5 at 5 series.

tUnE-YaRds, Cibo Matto, Beep! @ Music Hall of Williamsburg
tUnE-yArDs dove further into their world of quirky, eccentric pop on this year's Nikki Nack, and Cibo Matto returned with their first album since 1999 which had them still in good form. Tonight's night 2 of their 4-night run at MHOW.

The Blow, Zambri, Cookies @ Glasslands
Tonight two bands  (The Blow, Zambri) who've graced Glasslands' stage many times over the years will say goodbye to the venue which closes at the end of the month. It's the first show in a long time for Zambri.

Doomriders, Black Black Black, Humanless, Mammal @ Saint Vitus
Converge bassist Nate Newton's a busy guy these days. That band's touring next year, his band Old Man Gloom recently put out an album, Cavalera Conspiracy recently put out an album he played bass on, and the stoner metal band he fronts, Doomriders, are celebrating their 10th anniversary with a few shows this weekend. They're in NYC tonight.

Richard Buckner, Jessi Robertson, Dan Abraham @ Union Hall
Long-running alt-country singer Richard Buckner may not have gotten as big as some of his Merge labelmates (you may remember one of Arcade Fire's earliest NYC shows was with him) or some of the people he's influenced (like Bon Iver), but he's consistently kept it, releasing his tenth album Surrounded last year.

Philip Glass (The Etudes) @ BAM
Philip Glass' 20-years-in-the-making project is performed in full tonight with help from nine other pianists, including Nico Muhly and Timo Andres.

The Feelies @ Asbury Lanes
Hoboken indie rock legends, The Feelies opened for Yo La Tengo at Town Hall last night and decided to play another area show while they had their gear out anyway.

Single Mothers, Show Me The Body, Basic Bitches @ Baby's All Right
Single Mothers make angry, attitude filled punk that kicks right into full gear and never lets up on the aggression until they leave the stage. It may finally be getting colder out, but you're most likely leaving this one covered in sweat.

Foo Fighters @ Irving Plaza
Foo Fighters have a new stadium rock record out and their tour next year hits NYC for an actual stadium show at Citi Field. But tonight they're in town for something a tad smaller. You have to line up at the box office like the old days to get tickets. Good luck.

Lemonade, Cut Copy (Tim & Ben), JDH (DJ sets) @ Glasslands
Your chances to dance the night away at Glasslands are running out -- this is a good one, a tag team DJ event featuring members of Cut Copy and Lemonade.

Lagwagon, Swingin' Utters, This Legend @ Gramercy Theatre
Because you just can't escape '90s punk nostalgia, Fat Wreck Chords labelmates Lagwagon and Swingin' Utters both have new albums out this year and they're now celebrating them on a tour together.

Elvis Depressedly, Told Slant, Bellows, Yours Are The Only Ears @ Shea Stadium
Elvis Depressedly first began generating some buzz in the Orchid Tapes DIY scene (Alex G, RIcky Eat Acid, Foxes In Fiction, etc), and he's now made the move to larger label Run for Cover (Tigers Jaw, Pity Sex) who will put out his debut full length next year. The rest of tonight's bill is all in the family -- Told Slant, Bellows and Yours Are The Only Ears come from their own DIY community, a collective known as The Epoch, and frequently collaborate/share members.

The Waldos, Dogmatics, Heap @ Bowery Electric
If you're in the mood for some old school punk tonight, head to Bowery Electric where Walter Lure's band The Waldos plays. Before forming this band, Walter was a member of Johnny Thunders' Heartbreakers.

Alberta Cross, Fly Golden Eagle, The Candles, Invisibleman @ Brooklyn Night Bazaar
Brooklyn Night Bazaar is open with a night of folk rock. It's free to get in and watch the bands, and there's plenty of not-free fun too like arcade games, shopping, good food, drinks and more.