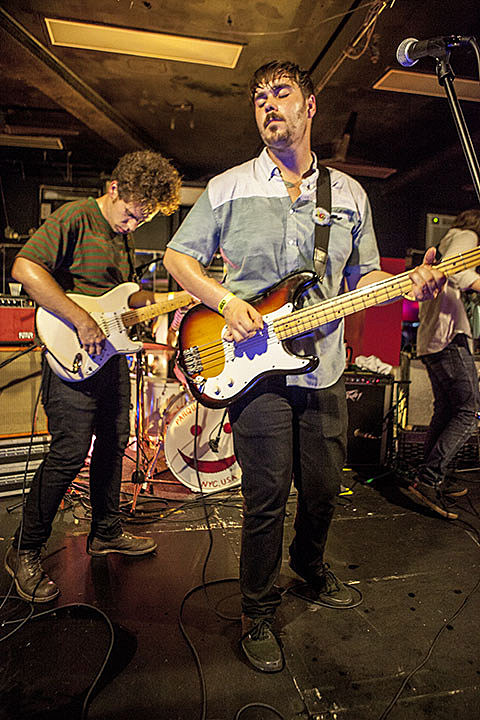 Parquet Courts, Blues Control,PC Worship @ Webster Hall
Parquet Courts have had a busy year, releasing two very good albums, staying on tour pretty much constantly, and forming a noise project with members of PC Worship (who open tonight). They cap off the year tonight with their biggest hometown show yet, which is sold out.

Kevin Barnes (Of Montreal), Kuroma @ Baby's All Right
Of Montreal are gearing up to release a new album early next year but frontman Kevin Barnes may well play some of it tonight at this solo show. MGMT-related band Kuroma opens.

Russian Circles, Mutoid Man @ Music Hall of Williamsburg
This is a killer double bill for fans of heavy music with post-rock crushers Russian Circles and the Converge/Cave In-related Mutoid Man, who have some of the elements of their main bands but trim all fat and just have a good time.

James Murphy (DJ set), Tim Sweeney, Mike Simonetti, Cooper Saver @ Output
Party like it's 2002: James Murphy will be spinning with his pal Tim Sweeney making Output feel a little like The Plant Bar (ok maybe not) with help from former Italians Do It Better domo Mike Simonetti (who just started a new label).

The Thurston Moore Band @ Marlin Room at Webster Hall
Thurston's current band has him backed by an excellent lineup that includes his former Sonic Youth bandmate Steve Shelley on drums and My Bloody Valentine's Deb Googe on bass, and their new album is his most Sonic Youth-sounding material since The Eternal.

Suckers, DOM, Future Punx, Cameron Hull, Mazed (DJ Set) @ Glasslands
Inactive for a while, Suckers are reforming to say goodbye to a venue they've played many times over the years: Glasslands, which closes at the end of the month. Also on the bill: DOM who reinvented themselves a while back (swapping guitars for synths), and neo-new-wave band Future Punx.

Pharmakon, Marshstepper, Puce Mary, Aischrolatreia Ligature, Penchant @ Saint Vitus
This is a great bill with the Destruction Unit-related Marshstepper whose live show includes blood, nudity and must be seen live if you want any real idea of what it's like. On top of that, there's Pharmakon (headlining) and Puce Mary, who both make eardrum-damaging PE/industrial/noise with wild vocals, and ex-The Men project Ligature.

Centro-Matic, Elephant Micah @ Rough Trade
Denton, TX's Centro-Matic have been together for nearly 20 years, mining a vein of psych somewhere between Crazy Horse and The Flaming Lips, having released 11 albums -- all pretty good -- including this year's rootsy Take Pride in Your Long Odds. All good things must (should?) come to an end, and Centro-matic announced that the band are going on indefinite hiatus...after this tour. These shows may be your last chance to see them in NYC.

Trey Anastasio Band @ Beacon Theatre
There's been no lack of Phish shows in NYC in the past year, and tonight their guitarist Trey Anastasio returns with the other band he leads for the first show in a two-night run. Both are sold out.