Swans in Chicago in June (more by Brigid Gallagher) 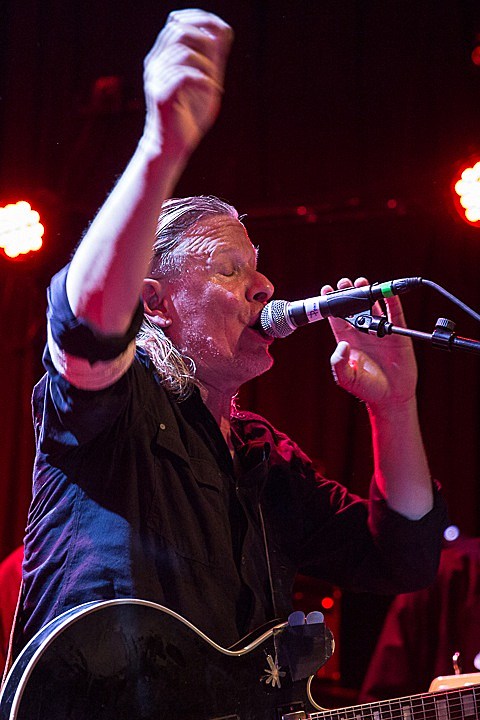 Swans, Liturgy @ Warsaw
More than 30 years into their career and Swans are arguably better than ever -- their last two records, including this year's To Be Kind, were pretty much instant classics. Tonight they squeeze in one last 2014 hometown show and they've got another (much newer) intense NYC band to open. Sold out.

Swearin', Quarterbacks, Bethlehem Steel, Mean Creek @ Brooklyn Night Bazaar
There's no lack of modern indie rock bands worshipping the '90s, but Swearin' are really one of the better ones, with actual songs that are as strong as some of the bands who influenced them.

YOB, Tombs, Kings Destroy @ Saint Vitus
Doom metal had quite the year in 2014, and looking at the year-end lists we've seen so far, it's pretty much between the Pallbearer album and YOB's Clearing the Path to Ascend for 2014's doom valedictorian. Tonight begins a 2-night stand at Saint Vitus with great and different openers each night. Both sold out.

Centro-Matic, Anders Parker Cloud Badge @ Mercury Lounge
Denton, TX's Centro-Matic have been together for nearly 20 years, mining a vein of psych somewhere between Crazy Horse and The Flaming Lips, having released 11 albums -- all pretty good -- including this year's rootsy Take Pride in Your Long Odds. All good things must (should?) come to an end, and Centro-matic announced that the band are going on indefinite hiatus...after this tour. This, the second of their two shows here, may be your last chance to see them in NYC.

Cymbals Eat Guitars, Alex G @ Knitting Factory
Cymbals Eat Guitars made their boldest LP yet with this year's LOSE, and if you like traditional-style indie rock, not many other records in 2014 hit the spot like that one did. Alex G's DIY pop opus DSU was one of 2014's memorable records too, making this a solid double bill.

Porches, LVL UP, What Moon Things, Cantina @ Palisades
Porches is co-headlining Bowery Ballroom in February but you can catch them in scruffier surroundings tonight with a host of worthy openers.

Modern Baseball, Knuckle Puck, Foxing, Crying, Somos @ Gramercy Theatre
This tour is loaded with cool stuff from the lyrical, youthful Modern Baseball, to the delicately arranged and cathartic Foxing, to the gameboy-fueled pop punks Crying, to guitar slingers Somos. This is the first of 2 NYC shows. MHOW on Monday.

Animal Collective (DJ Set) @ Brooklyn Bowl
Avey Tare and Panda Bear won't be there tonight, but the other two members of Animal Collective will be spinning the hits (or whatever it is they spin) from midnight til late.

Your Old Droog, Dave East @ Music Hall of Williamsburg
Your Old Droog got so many Nas comparisons at first that he was rumored to even secretly be the classic rapper himself. He isn't, but he's certainly got his own lyrical chops.

Coy Kids, Janka Nabay & The Bubu Gang, Dream Child, Against Grace, Left Me Bashful, Sursum Verbo @ Pianos
Bubu musician Janka Nabay plays this mid-evening at one of his favorite haunts tonight. His set is listed from 10 PM - midnight, so you could be in for an epic set.

Flosstradamus, GTA, Curtis Williams w/ Two-9 @ Terminal 5
Chicago beatmakers Flosstradamus know how to get a room moving, so it's no surprise that they're about to take over the huge Terminal 5 for two nights, one of which (tonight) is already sold out. Openers should be a good time too.

Demetri Martin @ Capitol Theatre
Master of witty deadpan one-liners Demetri Martin brings his short tour just out of NYC tonight, and he'll be back in February to play the city proper (with two other area dates before and after).

Aimee Mann, Ted Leo @ The Space at Westbury
Aimee Mann and Ted Leo (who collaborate as The Both) will bring their Christmas show to NYC proper on Saturday, but tonight's the second of two other shows in the area before that. Helping them get in the holiday spirit is Susannah Hoffs of The Bangles and geek rocker Jonathan Coulton.

Excepter, Guardian Alien, PCPC, Rat Piss Aquarium (Weyes Blood solo) @ Trans-Pecos
This is a release party for Parquet Courts/PC Worship side project PCPC's book that they made in lieu of making any kind of record so they'd have something at the merch table on their European tour. Playing live music will be Greg Fox in Guardian Alien Mode, Excepter, and Rat Piss Aquarium which is "Natalie Weyes Blood harshin."

The Figgs, BLOCKHOUSES @ Bowery Electric
The Figgs have been creating great power pop for two decades now, with no signs of stopping any time soon. Steeped in the tradition of The Replacements, Cheap Trick and Elvis Costello, their annual Christmas shows are always a great time to catch them as the coming of winter seems to kick the trio's playing up just a notch.

Vitamen, Baby Dayliner, Mishka Shubaly @ Union Pool
Snarky pop trio The Vitamen called it quits in 2005 and are not getting back together, but they are dusting off their instruments for this one-off show with their old pal Baby Dayliner (who they used to back).

Larry and The Babes, Sunflower Bean, Heeney, Nonsense, The Britanys @ Aviv
Brooklyn's newest DIY showspace tonight has a lineup of some of the hardest-working bands in the borrough, namely Sunflower Bean and Heeney.

Z100 Jingle Ball @ Madison Square Garden Arena
Depending on which corner of the "indie music internet" you frequent, you may like to know this lineup includes Taylor Swift, 5 Seconds of Summer, Ariana Grande, Iggy Azalea, Sam Smith, Pharrell Williams, Kiesza, Charli XCX and others. Or perhaps you might like to avoid this at all costs.

American Hi-Fi, Charly Bliss @ Mercury Lounge
Pretty sure American Hi-Fi stopped being the flavor of the weak in like, 2002 the latest, but it's 2014 and here we are.