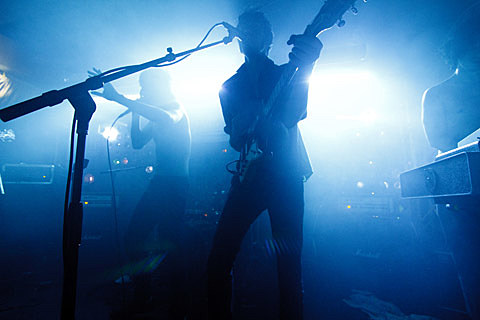 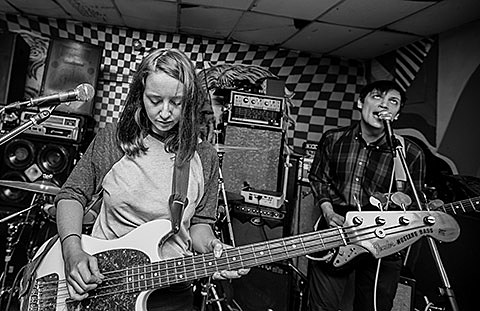 Fat White Family, Surfbort, EZTV @ Baby's All Right
Now calling Brooklyn their home base, UK band Fat White Family will be rubbing their scent on local venues more regularly -- which is good for music fans and maybe bad for club's cleaning staffs. It should be said that despite their (deserved) wild rep, FWF have a load of great songs and keep it together live, despite antics.

Celestial Shore, Grooms, The Teen Age, The Glazzies @ Brooklyn Night Bazaar
It's a high quality night of local indie rock at Brooklyn Bazaar, especially Grooms whose new album explores keyboards and krautrock to great effect, and Celestial Shore who balance precision and songcraft. It's a free show and you can get some holiday shopping done while you're there.

Computer Magic, Mainland, The Prettiots, Keith Sweaty @ Glasslands
Danielle "Danz" Johnson makes winning synthpop as Computer Magic and will be saying goodbye to Glasslands tonight (which closes in two weeks) with help from the spacey pop of Mainland and The Prettiots.

YOB, Occultation, Ecstatic Vision @ Saint Vitus
Doom metal had quite the year in 2014, and looking at the year-end lists we've seen so far, it's pretty much between the Pallbearer album and YOB's Clearing the Path to Ascend for 2014's doom valedictorian. Tonight concludes their 2-night stand at Saint Vitus with great and different openers each night. Sold out.

Broad City @ Bell House
Comedy Central's Broad City was one of 2014's runaway hits, a raunchier, more stoned, and funnier flipside to to the world of HBO's Girls (which has its merits too), all while managing to be a little closer to most young peoples' struggling NYC experiences. Ilana Glazer and Abbi Jacobson have been taking the show on the road, and return for two sold-out hometown performances tonight.

Anicon, Yellow Eyes, Kosmodemonic @ Union Pool
Two NYC metal bands, the proggy Anicon and the blackened Yellow Eyes, have been on the road together and tonight they wrap it up in their hometown. Also on the bill is psychedelic locals Kosmodemonic.

Rye Coalition, Black Wail @ WFMU Monty Hall
NJ rock and rollers Rye Coalition haven't put out new music in years, but the long-running band have been keeping at it in the live show department.

Hot Tuna @ Beacon Theatre
Hot Tuna are a pretty active band, especially considering how long they've been around, but tonight's an extra special show. Jorma Kaukonen and Jack Casady will be joined by their former Jefferson Airplane bandmate Marty Balin. Marty sang lead on a ton of their best songs, so hopefully that means we'll hear some Airplane faves (She Has Funny Cars?) tonight.

Flosstradamus, GTA, Curtis Williams, Two-9 @ Terminal 5
Chicago beatmakers Flosstradamus know how to get a room moving, so it's no surprise that they're taking over the huge Terminal 5 for two nights, this being the second. Openers should be a good time too.

Boston Strangler, waste management, Peacebreakers, Oblivionation, Jock's Blood, Moron @ Acheron
If you like the aggressive sounds of late '80s Boston hardcore, you're in luck because so do Boston Strangler and they do a ton of justice to those classic bands.

For those out in the daytime, keep in mind today is both Santacon and the Millions March protest...let's just hope those things don't collide.