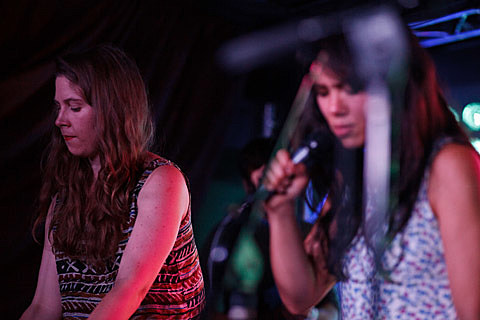 Deer Tick in Forest Hills in September (more by PSquared) 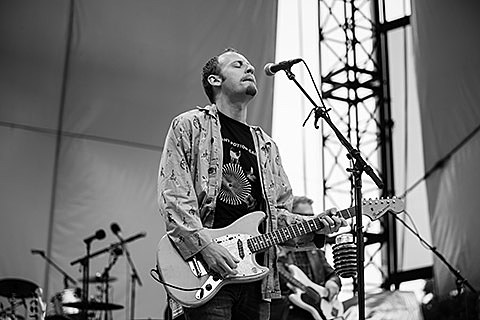 Deer Tick, Robert Ellis @ Brooklyn Bowl
Deer Tick are bringing the rock and the very drunk nights to Brooklyn Bowl for 6 nights in a row this holiday season leading up to New Year's Eve. This is night 2 and it will feature them performing Lou Reed's Transformer and a set of originals. Folk singer Robert Ellis opens.

Tanlines (DJ Set) @ Brooklyn Bowl
After the Deer Tick show, stick around for a DJ set from Brooklyn duo Tanlines.

Spraynard, Cayetana @ Asbury Lanes
There are also afterparties for the Bouncing Souls shows in Asbury Park, which all have great lineups too. This one has '90s punk worshippers Spraynard and great indie rock newcomers Cayetana.

A Sunny Day in Glasgow, Ava Luna, Wins @ Rough Trade
Philly's ASDIG released their critically acclaimed Sea When Absent this year and wrap up their 2014 with this show at Rough Trade. The band members are scattered all over the U.S. so there will probably not be another tour any time soon. See them while you can.

The Jazz June, Field Mouse, (Damn) This Desert Air @ Saint Vitus
While The Jazz June are veterans of the late '90s/early '00s emo scene, they returned this year with their first new album in 12 years and it's instead got them making fuzzy indie pop. They're good at that too, and the shoegazey pop of their Topshelf labelmates Field Mouse will be an excellent fit.

Sheer Terror, Slapshot, Heavy Chains, Blind Justice, Vice @ Music Hall of Williamsburg
NYHC veterans Sheer Terror turn 30 this year, and they're celebrating with this anniversary bash, and thanks to Boston's Slapshot there's a double dose of legendary hardcore on this bill.

Fiasco, Maxo @ Glasslands
Fiasco were regulars on the Brooklyn DIY scene in the late '00s and went their separate ways a few years back. They got back together to play one of DbA's final shows and now do the same for Glasslands.

The World is a Beautiful Place & I am No Longer Afraid To Die, The Hotelier, Saintseneca, Brightside @ Bowery Ballroom
This is an excellent triple bill with the post rock/chamber pop/spoken word-inspired emo band TWIABP, the punkier Hotelier, and lush indie folk band Saintseneca. Brightside (signed to Derrick from TWIABP's label Broken World) open the show.

Regal Degal, Son of Dad, King Cyst @ Baby's All Right
Regal Degal is throwing a release party for their new tape called "Regalize It." Also playing is Son of Dad which is the new thing from Real Estate Drummer Jackson Pollis (who you may remember from his own band Your Nature), and King Cyst, which is the current thing of Luka Usmiani from Big Troubles.

Institute, Uniform, Appetite, Horoscope @ Silent Barn
Austin's Institute bring together members from a few hardcore bands (Wiccans, Glue, etc) to take it down a bit and play something a little more post-punk-inspired. Still super raw though. Noise/hardcore duo Uniform (ex-The Men, Drunkdriver) is a great pairing for this too.

Rakim @ BB King's
Rakim, the legendary MC who influenced so many of our greatest rappers, is still going strong after all these years. He plays his home city of NYC a good amount, and gets in one last show before the end of 2014 tonight.

Taking Back Sunday, The Menzingers, Modern Chemistry @ Starland Ballroom
Say what you will about the direction Taking Back Sunday ended up going in, but their debut Tell All Your Friends is one of the highlights of early '00s emo and they've been back with the lineup that made that album for a few years now. Tonight's the first of their two holiday shows in NJ, and each one has excellent support from the newer scene. Tonight it's The Menzingers.

Crazy and The Brains, Gymshorts, Surfbort @ The Studio at Webster Hall
Tonight's show at Webster Studio is a cool local bill with folk punks Crazy and the Brains, surf punks Gymshorts, and garage punks Surfbort.

The Sons & Heirs, My Insatiable One @ Littlefield
What a dream double bill it would be to see The Smiths and Suede on the same stage. That will probably never happen, but you can see both tonight -- in tribute band form.