Erasure in Austin in October (more by Tim Griffin) 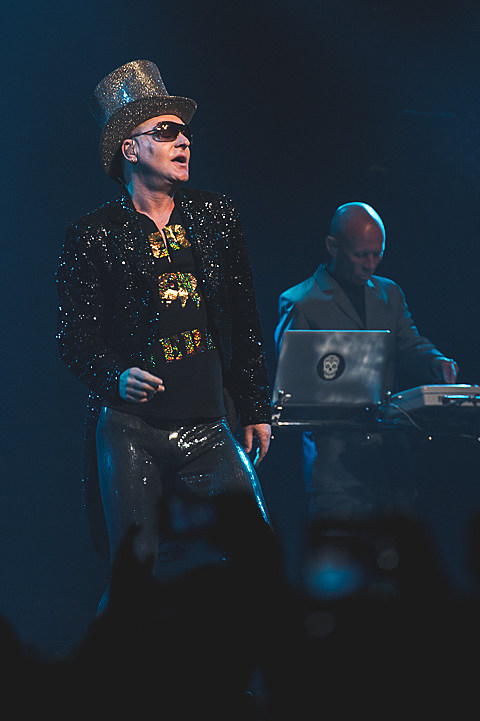 Erasure, All Hail The Silence @ Terminal 5
With a bucketload of synthpop hits, Vince Clarke and Andy Bell hit NYC for two NYC NYE shows, tonight being the first. Expect extra glitz and glamour in the duo's already over-the-top stage show.

Patti Smith @ Webster Hall
Punk legend Patti Smith put out a handful of classics of the late '70s NYC scene, and her live shows and newest music (2012's Banga) are still awesome today. Tonight she continues her tradition of year-end shows in her hometown with her second of two Webster Hall shows.

The Hold Steady, The So So Glos @ Music Hall of Williamsburg
Like their fellow bar rock pals Deer Tick, The Hold Steady are ringing in the new year with a multi-night run in NYC this year. They bring the party to MHOW tonight for their first of two shows there, both of which are with local punks The So So Glos.

Deer Tick, The Weeks @ Brooklyn Bowl
Deer Tick are bringing the rock and the very drunk nights to Brooklyn Bowl for 6 nights in a row this holiday season leading up to New Year's Eve. This is night 5 and it will feature them performing Elvis Costello's My Aim Is True in its entirety, plus a set of originals. Southern rockers The Weeks open.

Cymbals Eat Guitars, Keepaway, Mon Khmer, Air Waves @ Glasslands
It's the second to last night you'll ever see a show at Glasslands, and for this one they got local indie rock greats Cymbals Eat Guitars, who took a huge step forward on this year's LOSE (one of our favorite albums of 2014).

Plow United, Mikey Erg, Chumped, Up For Nothing, Hatrabbits @ The Acheron
Melodic '90s punks Plow United have been back for a few years now, and they'll cap off 2014 with this show that includes fellow vet Mikey Erg (of like, 90 bands), one of NYC's best newcomers for this kind of stuff, Chumped, and more.

Sunflower Bean, Life Size Maps, Bluffing, Haybaby @ Baby's All Right
Baby's All Right put together this lineup of some of their favorite "come-ups" from 2014. This New Year's Eve Eve show is free.

The Detroit Cobras, Dough Rollers, Twin Guns @ The Bowery Electric
The Motor City garage rock covers crew Detroit Cobras are on the East Coast for some shows around New Year's, this being the first.