Man Man at Williamsburg Park in 2013 (more by Amanda Hatfield) 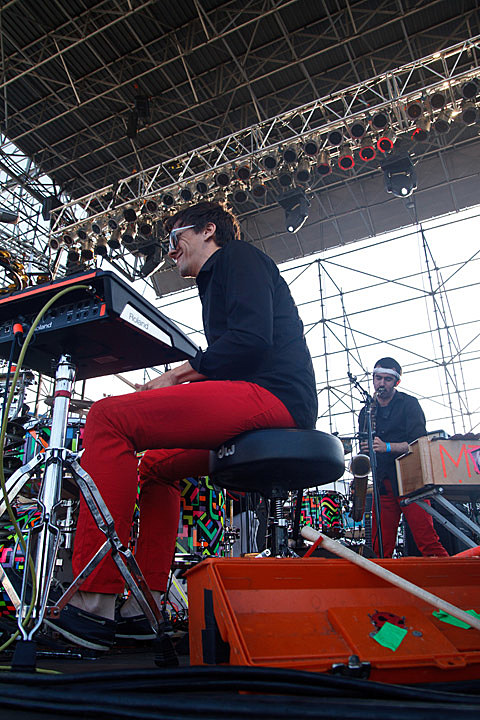 Gogol Bordello, Ana Tijoux, Man Man @ Terminal 5
Gogol Bordello often play NYC on New Year's Eve, but this year they did it in Philly. However, they're back now for a two-night run which wraps up tonight, and what better time than the weekend after NYE to keep the party going?

Special Guests, Physical Therapy, Person of Interest, J. Albert, Tallesen, Reliever @ Aviv
No word on who the special guests are, but this is already a good lineup of electronic music, and also a good chance to check out Greenpoint's new venue Aviv.

Geoff Rickly, Vinnie Caruana, Matty Carlock @ Dante Hall Theater of the Arts (Atlantic City)
Though Thursday is missed, frontman Geoff Rickly has arguably become more active in music than he was with that band. Since then, he's put out music with his band United Nations, No Devotion, and Strangelight, as well as under his own name, and he re-started his record label Collect Records. Tonight he's in solo mode, and one's things for sure: he has no lack of material to pull from. Vinnie Caruana has also been a busy guy lately (his band The Movielife is reuniting this year), and he's in solo mode tonight as well.

Emperor X, eskimeaux, Legs Like Tree Trunks, Family Lumber @ Palisades
While Emperor X has been making DIY pop since the late '90s, lately he's found himself fitting very well into the more modern DIY pop scene with several younger bands that owe a bit to his sound (intentionally or not). One of those, Eskimeaux, shares this bill with him tonight.