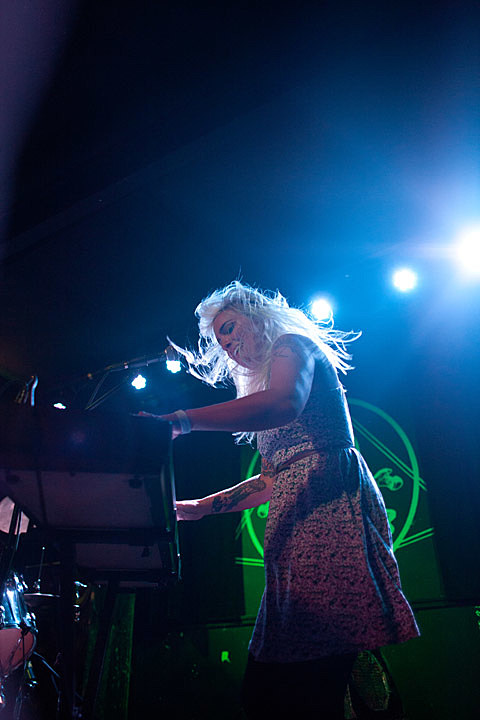 Heaven's Jail, Such Hounds, Milk Dick @ Baby's All Right
This is a diverse bill of locals, and especially of note is indie folk band Heaven's Jail and scuz-pop band Milk Dick.

Sharkmuffin, Mystery Channels, The Meltaways, granny @ Cake Shop
Brooklyn garage rock trio Sharkmuffin are a newer band, but sound straight out of the garage rock boom of the last decade. Picture something between Yeah Yeah Yeahs and Sahara Hotnights and you'll get an idea.

Dr. Dog, The Districts @ Music Hall of Williamsburg
Dr. Dog are on night 2 of their eight-night NYC run with different openers. Tonight it's roots rockers The Districts. Sold out.

Lydia Lunch's RETROVIRUS w/ Weasel Walter, Bob Bert & Tim Dahl; Yvette @ Rough Trade
No wave legend Lydia Lunch (of Teenage Jesus and the Jerks and many other projects) brings back her RETROVIRUS show tonight, and she's joined by an impressive cast of guests for it. Opening are NYC's much newer and also great noisemakers, Yvette.

Mayhem, Watain, Revenge @ Webster Hall
This is pretty much the place to be for black metal fans tonight with second wave legends Mayhem, one of the current millennium's best in the genre, Watain, and war metal extremists Revenge.

!!! , DJ Degal @ Union Pool
Punk-funk stalwarts !!! (Chk Chk Chk) are getting ready to head into the studio to record their new album. To make sure they're well prepared, they'll be playing their new material (and a few old favorites) this week at four consecutive nights at Union Pool. Tonight's your final chance to catch them.

Winter JazzFest
The 2015 edition of this yearly festival is in full swing tonight with concerts at 10 different NYC venues.

Mother Falcon, Marques Toliver (APAP NYC) @ Joe's Pub
Music industry conference APAP is happening in NYC this weekend, and with it many shows that don't fall under traditional rock formats. (You might be at an APAP showcase and not even realize it.) There are lots of APAP showcases at Joe's Pub over the weekend, including this one with many-membered chamber pop collective Mother Falcon.

NYC Podfest @ Fontana's
Now in its third year, the NYC Podfest brings the best of, you guessed it, podcasts from across the country to New York for a fun-filled audio-based weekend. Today it's taking place at LES venue Fontana's with an all-day program that includes the "Podcast Panel" with Jason Zinoman of The New York Times, with guests Matt Braunger, Dave Hill and Julie Klausner. And lots more.