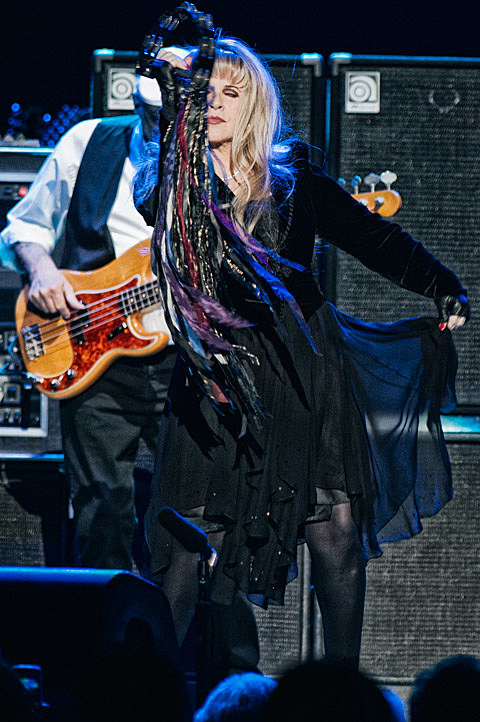 Fleetwood Mac @ Madison Square Garden
Fleetwood Mac are now back with their entire classic lineup -- Christine McVie, John McVie, Mick Fleetwood, Stevie Nicks and Lindsey Buckingham -- and tonight they begin their multi-night NYC-area run, this being the only show in NYC proper. They've still got it and they play all the hits, so see them while you still can. They're saying they may stop touring after this year.

Sufjan Stevens, Yarn/Wire @ BAM
While Sufjan will release his first studio album since 2010 this March, ahead of that he's premiering a new piece called Round-Up at BAM which continues tonight and runs through Sunday (1/25). Sufjan will be on electronics and new-music ensemble Yarn/Wire is on piano and percussion.

Father, Junglepussy, Glass Gang @ Baby's All Right
Get a double dose of futuristic rap from Father and Junglepussy, plus an opening set from Brooklyn electropoppers Glass Gang.

Honduras, The Teen Age, The Yin Tangs, Sunset Guns, Best Behavior @ Coco 66
Yes, Coco 66 still exists and has shows, even if it's been out of the spotlight for a while. Tonight's a nice lineup of local bands headlined by the very talented Honduras.

Gingerlys, Mumblr, Palehound, Fern Mayo @ Shea Stadium
Somewhere between indiepop and shoegaze like the catchy sounds of Gingerys who are currently working on the first album. Catch 'em in action tonight with also-great locals Palehound and more.

John Hodgman's Secret Society @ Bell House
John Hodgman's society (of comedy concerns) isn't so much a secret anymore, having outgrown its old home of Union Hall and may soon do the same for its new one -- tonight's sold out.