UPDATE: LOOK HERE FOR THE LATEST 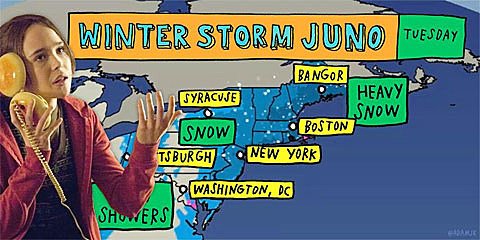 UPDATE: LOOK HERE FOR THE LATEST

AND HERE'S A "JUNO" playlist for you.

As you probably know, weather reports are calling for a "crippling and possibly historic" blizzard starting in mid-afternoon today. We'll try to keep you up to date on show cancellations, but if it gets bad you might want to call the venue to make sure it's still happening. Be safe.

Bully, Oxen Free, Brave Shores @ Pianos
Nashville's Bully got some buzz during CMJ for their catchy indie rock. We're still awaiting their album, but in the meantime they return to NYC tonight.

Action Bronson @ BB King's
Action Bronson's got a new album on the way this March, and from the single he put out, anticipation is pretty high. Hopefully we'll hear a few more new ones tonight.

Zola Jesus, UNIFORM @ Saint Vitus
Zola Jesus is still riding high off last year's Taiga, her biggest-sounding album yet and first for a big label. But while last year she supported it at Webster Hall, this week she gets more intimate with two Saint Vitus shows (both sold out). This is the second, and opening tonight is noise duo UNIFORM (ex-Drunkdriver, The Men).

Broncho, Dreamers, Heaven @ Rough Trade
Oklahoma's Broncho make a good mix of power pop, garage rock, and some more out-there stuff too. In two days from now, they open for Billy Idol at Beacon Theatre, but here's your chance to catch them in a more intimate setting.

Years and Years @ Le Poisson Rouge
Winners of the BBC's "Sound of 2015" Poll (last year was Sam Smith; 2013 was Haim), UK act Years & Years make slick electronic R&B. This is their first US show. Sold out.

Savages @ Baby's All Right
Tonight starts Savages' final week of their nine-show NYC residency. What new surprises are in store?

Night Train @ Littlefield (CANCELED)
Littlefield is closed to due to Winter Storm Juno.

Marilyn Manson @ Terminal 5
Veteran shock rocker Marilyn Manson has been getting some of the best reviews of his career for his new album, The Pale Emperor. The very young band Unlocking the Truth open tonight.