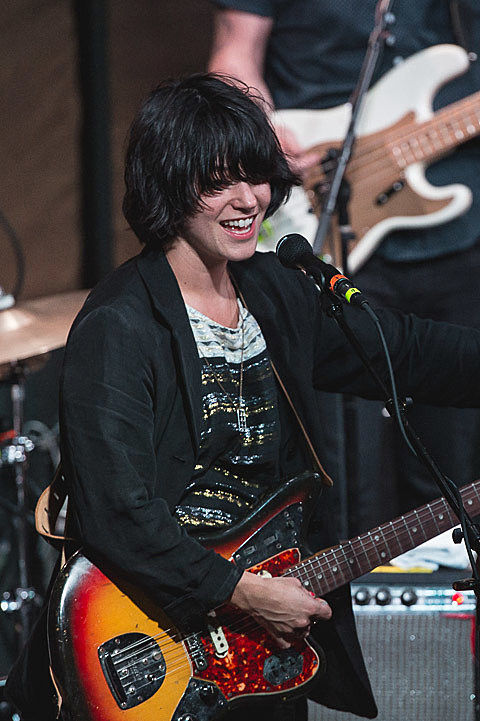 Sharon Van Etten, Leon Bridges @ Warsaw
Sharon Van Etten's 2014 album, Are We There, ended up on a ton of year-end lists (including our own), and deservedly so because few of her peers can craft a song like SVE. Tonight she begins her 2-night stand at Warsaw. Both sold out.

Helmet @ Bowery Ballroom
20 years ago Helmet released their third album, Betty, which saw them pushing alt-metal's boundaries and incorporating sounds from outside the genre. Now for its anniversary, they're playing the album in full on this tour which hits NYC for three sold-out shows. This is the first.

Jefre Cantu-Ledesma, GDFX, GABI, Austin Cesear @ Baby's All Right
On his new album A Year with 13 Moons, Jefre Cantu-Ledesma weaves sonic tapestries of ethereal beauty, chilled out beats and white noise. Is it a little like Ulrich Schnauss? At times, yes. (It's weirder,though.) He plays tonight with GABI who is signed to Mexican Summer imprint Software.

Beverly @ Jewish Museum
This is the opening celebration of the Jewish Museum's "Helena Rubinstein: Beauty Is Power," with a performance by Brooklyn indie pop band Beverly. Also: open bar.

Colin Hay @ City Winery
Who can it be now? It's former Men at Work singer Colin Hay, who plays the final of his three City Winery shows this evening.

Res @ Rockwood Musc Hall
Res is probably best known for frequently collaborating with Talib Kweli and forming the group Idle Warship with him, but tonight she plays this show on her own.