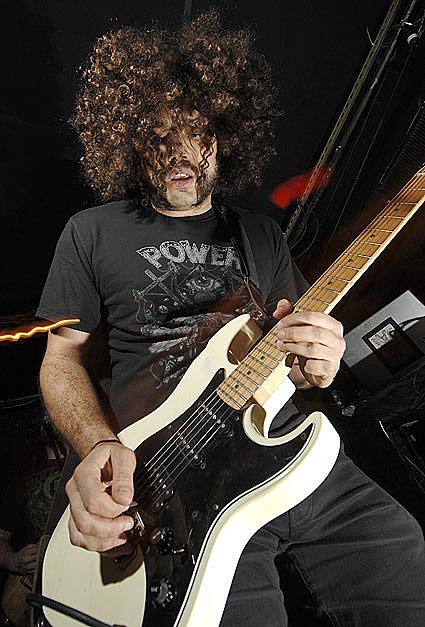 Quilt, Monograms, King Cyst @ Brooklyn Night Bazaar
With last year's Held in Splendor, Boston quartet Quilt trancended the paisley folk of their debut into a more complex, more appealing band whose influences were a little harder to pin down. The great songs and harmonies remained. They're great live and this show is free.

Helmet @ Bowery Ballroom
20 years ago Helmet released their third album, Betty, which saw them pushing alt-metal's boundaries and incorporating sounds from outside the genre. Now for its anniversary, they're playing the album in full (plus a lot of other songs) on this tour which hits NYC for three sold-out shows. This is the second.

Retox, Whores, Primitive Weapons, Fashion Week @ Saint Vitus
Justin Pearson is man of many bands. The most popular is probably the wacky post-hardcore of The Locust, but for Retox and strips things down and delivers fast, raw punk rock. Heavy noise rockers Whores are just as excellent, and tonight's local support ain't half bad either.

Hull, Wizard Rifle, Elder, Cleanteeth @ Coco 66
Hull have been one of Brooklyn's better sludge bands for years, but unfortunately they're calling it a day. Before that though, they'll play one final show tonight.

Cellphone, Crosss @ Cake Shop
If you enjoy doomy riffs but always wanted to hear more traditional indie rock vocals paired with them, Canadian band Crosss have you covered. This is their first of two NYC stops as part of their tour with crazed psych-punks Cellphone. This'll be a good show.

The Left Banke, Field Guides, Color Collage @ Fulton Stall Market
This is a mini record fare, featuring a mix of labels and used vendors...plus live music from '60s legends The Left Banke and more. If you're wondering, it's indoors.

Anasazi, L.O.T.I.O.N., Sadist, Nandas @ Palisades
Tonight Palisades plays host to some of the city's best (and most active) punk bands, headlined by the post-punk-leaning Anasazi.

Doe, The Academics, Marco With Love, Wendy Hackett Band, Garett Olson and the 49th Parallel @ Pianos
UK trio Doe pull from '90s indie rock and emo influences. With a new compliation out on Old Flame, the band are over for a bunch of NYC-area shows, this being the first.

NGHBRS, Fort Lean, The Henry Millers @ Rough Trade
Though they've been around since the start of this decade, Brooklyn-via-Wesleyan band Fort Lean are only now just getting around to releasing their debut album, out this spring. Catch them tonight on this bill of similar poppy indie.