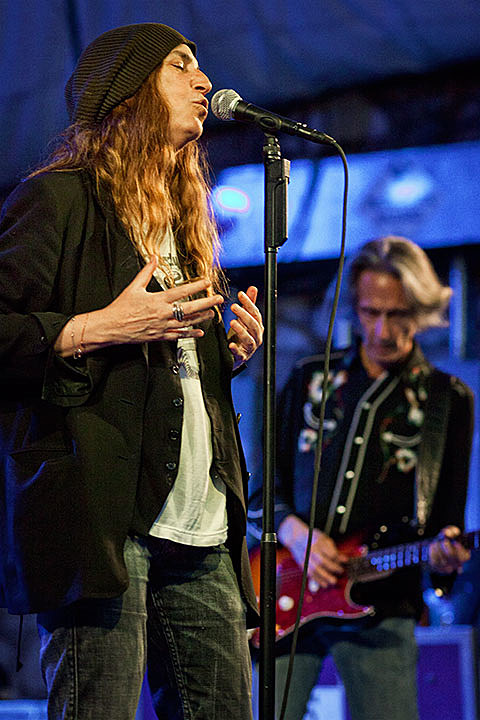 The snowy weather may cause some cancelations, so be sure to check with the venue before heading out tonight. You can browse our full NYC show calendar for all of tonight's shows, but here are some highlights...

Will Butler, TEEN @ Bowery Ballroom
His brother Win gets most of the spotlight, but the Arcade Fire's Will Butler is a talented singer and songwriter too, as can be heard on his first solo album which is out next week on Merge. Tonight's the record release show. Sold out.

The Growlers, Broncho @ Baby's All Right
Party rockers The Growlers released Chinese Fountain back in September which found the band in a laid-back mood, drawing inspiration from twangy early-'60s rock, with a few danceable numbers in there as well. Tonight's their second show of a five-night-stand at Baby's All Right with Broncho.

Punch Brothers, Gaby Moreno @ Beacon Theatre
Chris Thile is one of the more prolific guys in modern bluegrass. He reunited Nickel Creek last year, and now he's already got a new Punch Brothers album and is on tour with them too.

Hundred Waters, Mitski @ Music Hall of Williamsburg
Both Hundred Waters and Mitski mix folk and art pop, with the former going in a more fleshed-out and sometimes-electronic direction and the latter in a more lo-fi indie direction. Great double bill.

Regal Degal @ Elvis Guesthouse
It may not be a first, but it's a first for us: this is a "record announce" party for Regal Degal's new album, Not Now, which will be out in May via Terrible. Hey, any excuse for a party.

EULA, No Bra, GULL, Martin Bisi @ Palisades
It's the release party for local noise rockers EULA, and Martin Bisi (who produced the album) also plays a set with former members of past bands he's produced, Sonic Youth and Swans. No Bra's post-punk performance art is worth catching too.

Curren$y @ B.B. King Blues Club
New Orleans rapper Curren$y remains crazy prolific (he last released a mixtape in the fall and has an album planned for this year) and he's pretty active on the road too. Catch him in NYC tonight.

Nude Beach, Bodega Bay, Dances @ Bowery Electric
Nude Beach make late- 70s-inspired power pop and do a ton of justice to the sound. This is one of two upcoming hometown shows for the NYC band at the moment, and it's free with RSVP.

Bloodshot Bill @ Union Pool
Tandoori Knights member, King Khan & BBQ/Mark Sultan collaborator, and solo artist in his own right, Bloodshot Bill has a voice that can go from a guttural growl to disarming falsetto, sometime within a single phrase. His take on blues and rock n' roll is best experienced live.

Alex Winston, Royal Tongues @ The Westway
Alex Winston's new singles have seen her going in a more conventionally pop direction than her 2012 debut album, and if you want to see how those translate live, you have a chance tonight.