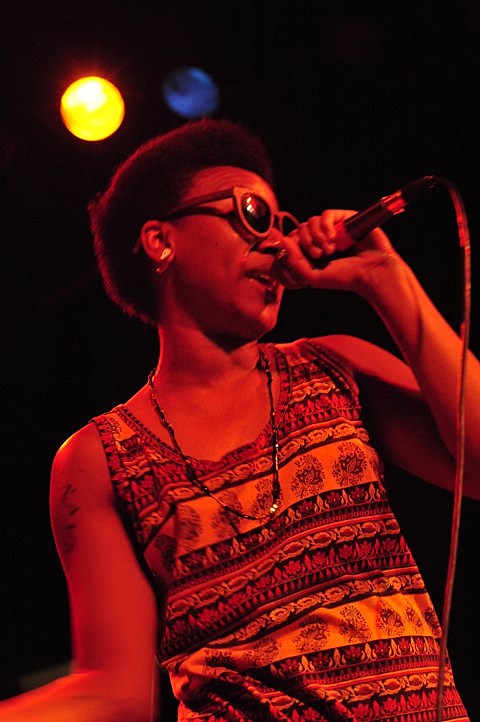 THEESatisfaction, Columbia Nights, Moruf @ Santos Party House
THEESatisfaction are Sub Pop labelmates and collaborators with Shabazz Palaces, and they pretty much screw with the R&B formula as much as Shabazz does with rap. Tonight's the release show for their new album, EarthEE.

The Growlers, Broncho @ Baby's All Right
Party rockers The Growlers released Chinese Fountain back in September which found the band in a laid-back mood, drawing inspiration from twangy early-'60s rock, with a few danceable numbers in there as well. Tonight's their thrid show of a five-night-stand at Baby's All Right with Broncho. Doors at midnight for this one.

Lee Foss, Eskuche & Nu Sky, DKDS, Psychemagik, Nikola Baytala @ Output
London/LA duo Psychemagik are expert are some of the most remixers of the moment and are skilled producers too. Catch them spinning tonight in Output's Panther Room.

California X, Darkwing, Ovlov, IYEZ @ Saint Vitus
California X recall the sludgy rock of bands like Dinosaur Jr and Torche, and their new LP brings some new elements in too like Thin Lizzy-esque twin leads. Ovlov are pretty likeminded to Cali X too.

Screaming Females, Downtown Boys, Aye Nako @ Silent Barn
Screaming Females are already known for their shredding guitar solos, but the new album Rose Mountain has the band focusing a little more on great choruses. It's up their with the best of their previous work. Tonight's the fourth and final NYC show on their current tour, and both openers tonight are great too. Advance tickets sold out, but some tix available at doors.

Couch Slut, No Way, Bardus,Grizzlor @ The Acheron
Couch Slut's killer debut, My Life As A Woman, is an unrelenting mix of metal, hardcore, noise rock, and it even gets kinda pretty once or twice.

Craig Ferguson @ Town Hall
Now that he's free from hosting a late night talk show, Craig Ferguson has time to get back into standup and starts his three-night run at Town Hall tonight.

Dave Hill, Valley Lodge, Aparna Nancherla, Mrs. Smith, Bandits on the Run @ Union Hall
It's the March edition of Dave Hill's show "Meet Me in the Bathroom and Tell Me All Your Secrets" with his group Valley Lodge as the house band.

Slingshot Dakota, Bethlehem Steel, Vagabon, Lauren Early @ Aviv
Slingshot Dakota's driving pop sounds kind of like a more energetic Mates of State, and it's even better live. This is their last show before they start recording their new album. Locals Vagabon are worth showing up for too.