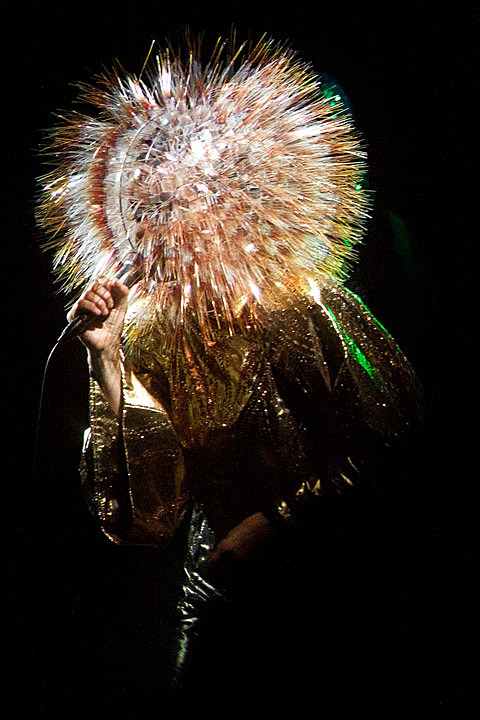 Bjork @ Carnegie Hall
With her MoMA retrospective opening tomorrow, March is unofficially Bjork month in NYC. This is the first of her sold-out NYC Vulnicura shows, and we're excited to find out what she has in store for us. This one's a noon matinee.

Suicide, The Vacant Lots, Pharmakon @ Webster Hall
Alan Vega and Martin Rev have been making twisted, distorto-synth music since 1975 and their influence cannot be underestimated. They are still going strong and loud as ever.

Gang of Four, Public Access TV @ Irving Plaza
With guitarist Andy Gill being the sole original member remaining, it's more like Gang of One these days. Wild vocalist Jon King is kinda irreplaceable, but credit where credit's due: Gill's taut style is still being aped today all over the world.

Will Butler, TEEN @ Baby's All Right
His brother Win gets most of the spotlight, but the Arcade Fire's Will Butler is a talented singer and songwriter too, as can be heard on his first solo album which is out next week on Merge. Tonight's his second NYC show with TEEN.w. Sold out.

The Growlers, Broncho @ Baby's All Right
Party rockers The Growlers released Chinese Fountain back in September which found the band in a laid-back mood, drawing inspiration from twangy early-'60s rock, with a few danceable numbers in there as well. Tonight's their fourth show of a five-night-stand at Baby's All Right with Broncho. Doors at midnight for this one.

Johnny Aries, Crazy and The Brains, Fat Heaven @ Alphaville
One of three Burger Revolution shows happening in NYC tonight, this one The Drums' Johnny Aries, xylophone-fueled punks Crazy & the Brains, and Fat Heaven.

Blessed State, Worn Leather, Summer Saints, Long Drag @ The Flat
The second NYC show of the day for Blessed State is this one. They make melodic post-hardcore somewhere between Braid and early Husker Du. It's good stuff.

Craig Ferguson @ Town Hall
Now that he's free from hosting a late night talk show, Craig Ferguson has time to get back into standup (well, till he starts filming his new comedy for ABC) and does two shows at Town Hall tonight.