photo: The Cribs at Bowery Ballroom in 2008 (more by Tim Griffin) 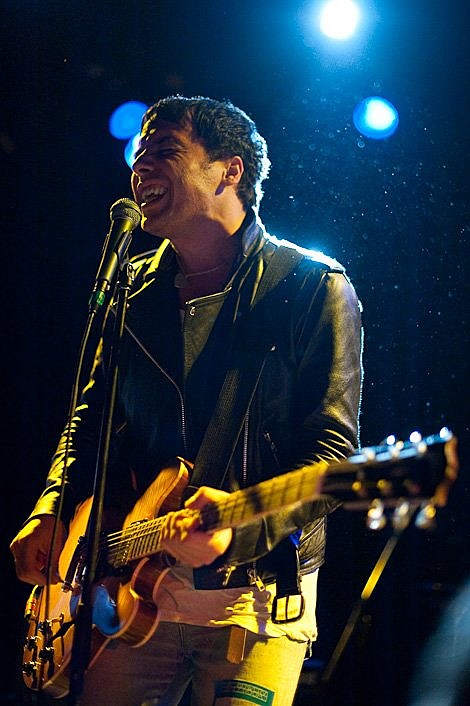 D'Angelo and the Vanguard @ Best Buy Theatre
Neo-soul great D'Angelo may take a very long time releasing albums, but it's always worth the wait because the three that he has are masterpieces. That includes his newest, 2014's Black Messiah.

Alabama Shakes @ Beacon Theatre
We're still a month out from Alabama Shakes' new album Sound & Color, (produced by Blake Mills ) but they'll surely be playing some of it tonight, their first of two consecutive shows at Beacon Theatre

Of Montreal, Yonatan Gat @ Webster Hall
Longrunning avant-pop band Of Montreal got a bit of their groove back on the just released Aureate Gloom. Mind you that's rarely a problem at their theatrical live shows.

Of Montreal @ Greene Space
Earlier in the day, Kevin Barnes and the rest of the band will play this lunchtime show at WNYC's Greene Space. It's RSVP'd out but you can stream it live online. UPDATE: Canceled due to illness.

The Cribs, Cold Fronts @ Mercury Lounge
Wakefield, UK's finest, The Cribs were adding "Whoa Oh" choruses to their songs long before it became a hitmaking standard. They're back with a very good new album (produced by Ric Ocasek) and this is their first of three sold-out NYC shows.

Glockers, Northern Faces, Vinyl Thief, Jangula, Ski Lodge, The New Resistants @ Pianos
Ski Lodge, who got a little more synthy on their new single, are doing a joint residency with fellow Brooklyn band Jangula every Wednesday in March, and tonight is the second of those shows.

Tom Scharpling, Jon Wurster @ The Bell House (2 shows)
Tom Scharpling and Jon Wurster, the brains behind the newly relaunched The Best Show, have a 16-disc box set of the best bits from the show's WFMU days coming out via the Numero Group this month and are doing four live shows over two nights at The Bell House. Both of tonight's shows are sold out.

The Mystery Lights, Cool Ghouls, Surfbort, Acid Dad @ Union Pool
San Francisco's Cool Ghouls straddle a line between the present and the past. In tight with the current garage/psych scene, their sound also hearkens back to the days of Haight-Ashbury scene. Their sophomore album, A Swirling Fire Burning Through The Rhye, was produced by Sonny Smith.

Lust for Youth, Soren @ Home Sweet Home (Nothing Changes)
Lust for Youth hail from the same Danish scene as Iceage and Lower, and while they share those bands' knacks for melodramatic performances, they substitute punky guitars for danceable synths. Tonight's their first of two NYC shows on this tour, and it also doubles as Nothing Changes' 2-year anniversary party.

Jazmine Sullivan, Jordan Bratton @ Irving Plaza
Neo-soul singer Jazmine Sullivan's new album, Reality Show, is in the realm of recent albums by Frank Ocean and Beyonce, and if you dug those Jazmine should be right up your alley too.

Fashawn, SonReal, DJ Exile, Earthgang @ SOB's
California rapper Fashawn finally followed his much-loved 2009 debut, Boy Meets World, with a new album, The Ecology, which features Nas and others. Tonight he brings his tour in support of it to NYC.

Ensemble LPR w/ André de Ridder @ Le Poisson Rouge
Tonight, André de Ridder of Berlin collective Stargaze conducts Ensemble LPR for the premieres of two new pieces by indie musicians. One is by Mica Levi of Micachu & the Shapes and the other is by David Longstreth of Dirty Projectors. Levi and Longstreth be in attendance tonight, but not performing.

Big Terrific @ Cameos
Max Silvestri hosts the free weekly comedy show in the back of Williamsburg's Cameo. No word on who's performing tonight, but Max usually lets us know via his Twitter.