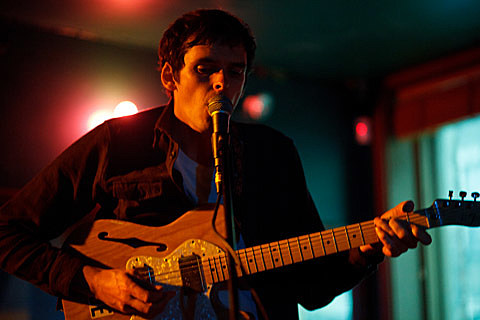 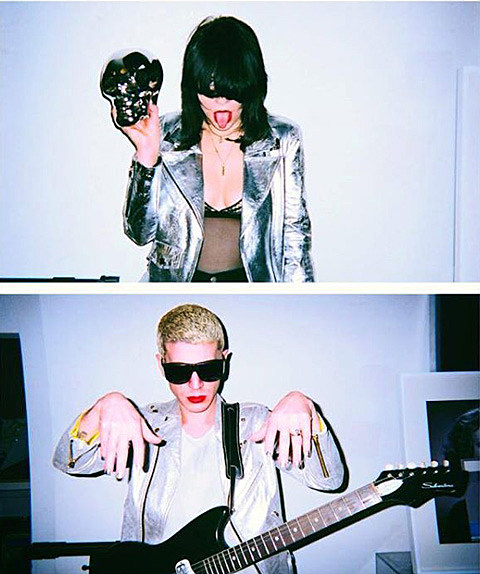 Tonight is thick with bands on their way to SXSW. A lot of good options! You can browse our full NYC show calendar for all of tonight's shows, but here are some highlights...

Haunted Hearts, The New Lines @ Saint Vitus
Haunted Hearts, aka Dee Dee of Dum Dum Girls and Brandon of Crocodiles, released their debut album, Initiation, last year. A labor of love (and concept album about S&M) for this real-life couple, it falls sonically somewhere between their two groups, and their voices sound nice together. This is only HH's second-ever live show, and who knows when they'll play again? Also on the bill are The New Lines, whose icy, baroque psych is in the same solar system as Broadcast.

The Cribs @ Baby's All Right
Wakefield, UK's finest, The Cribs were adding "Whoa Oh" choruses to their songs long before it became a hitmaking standard. They're back with a very good new album (produced by Ric Ocasek) and this is their second of three sold-out NYC shows.

The Church, The Sharp Things @ Bowery Ballroom
Alt-rock vets may be best known for "Under the Milky Way," but these Australians have a consistent, strong catalog of albums full of shimmering guitar rock. Marty Willson-Piper's presence will be missed, though. They play Rough Trade tomorrow.

Craft Spells, The Bilinda Butchers @ Mercury Lounge
Craft Spells released their second album, Naseua, via Captured Tracks last year which took them into more pastoral sonic landscapes than we'd heard them do previously. As for their tourmates, The Bilinda Butchers, it might not surprise you that a band whose name references My Bloody Valentine's other singer/guitarist might have shoegaze tendencies. Both bands also play Brooklyn Night Bazaar on Saturday.

Girl Band, Monograms @ Mercury Lounge
Dublin Ireland quartet Girl Band (all-guys, for the record) hit hard with noisy, loud guitars and shouted vocals in the fine punk tradition of McLusky or The Fall. (Or, the shouty punks of your choosing.) Their live show is supposed to be good.

Soft Spot, Outer Spaces, Giant Peach, Thelonius Junk @ Palisades
Outer Spaces is the current focus of Cara Beth Satalino, who has previously played solo and in the band Witches. The newest dose of their folk/indie/punk blend is the Garbage Beach EP that came out recently on Salinas Records. Also of particular note on this bill is Thelonius Junk, a new Big Ups side project.

Heaven's Gate, Pill, Final Bloom, Nuraxi, Future Punx (DJ Set) @ The Acheron
Out of the ashes of Sweet Bulbs, Heaven's Gate took some of their old band's dreamy noise, but took it in a significantly different direction, playing to singer strengths and became more of punky rock band... while still using a lot of effects pedals. We're still waiting for the band to follow-up their terrific 2013 debut. Tonight's show is also the EP release party for Pill who make shouty post-punk that's filthy with saxxy skronk.

The Dwarves, The Atom Age, Threats @ The Bowery Electric
The Dwarves have been making snotty punk for over two decades and last year's The Dwarves Invented Rock & Roll (Recess Records) proved they haven't lost it one bit. They're on tour with Asian Man-signed punk 'n' rollers The Atom Age.

Protex, Shocked Minds, Babyshakes, Games, DJ Josh Styles @ Grand Victory
Belfast, Ireland's Protex came from the same scene as The Undertones and both bands have similar sonics: hyperactive, punky powerpop. The band were only together for three years ('78-'80) but reformed in 2010 and have been going since. The rest of the lineup is well-suited with greasy-haired, jean-jacketed garage powerpop.

Young Thug & Travi$ Scott, Metro Boomin @ The Paramount
Young Thug put out three acclaimed mixtapes last year, and his singles "Stoner" and "Danny Glover" are basically inescapable. Travi$ Scott has been behind the scenes on Kanye, Drake and Big Sean's new stuff, and his own new music (particularly new single "High Fashion") is coming into its own too. Last night, the two rising rap stars played two Webster Hall shows, and tonight they're nearby NYC for this Long Island show.

Tim Fite, Bonaparte, Kid Simius @ Union Hall
Tim Fite's an iconoclast, drawing from punk, country and hip hop whose (usually) one-man-band live shows are an AV-geek's dream. Tonight's show should be a lot of fun, as it's with Berlin-based theatrical rockers Bonaparte.

Pictureplane, Prince Rama (DJ Set), The Mast, Kim Boekbinder @ Aviv
There's never a lack of Pictureplane shows in NYC, and we're not complaining because he always brings the party. There's also a DJ set from another group of local regulars, Prince Rama, and more.

Liege Lord, Destructor, Machine of War, Aggression, Magic Circle @ The Bell House
This is night one of the two-night "Defenders of the Old Fest" that celebrates heavy groups both "classic and contemporary as well the fans that are keeping the spirit of the music alive and relevant."