photo: TOPS at Pianos in 2012 (more by Amanda Hatfield) 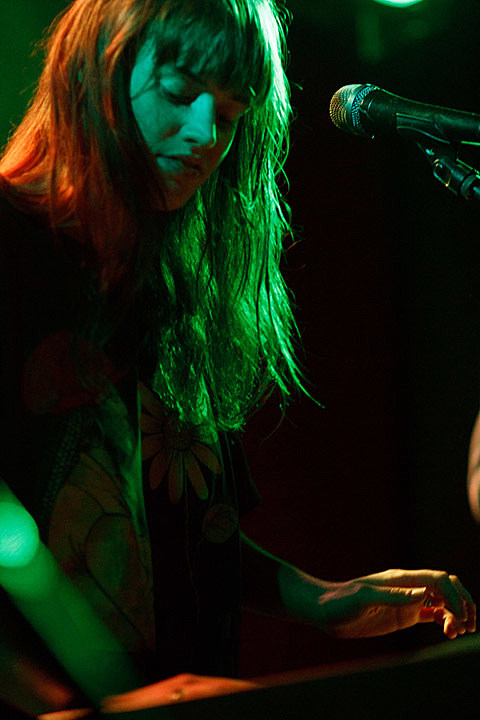 Bjork @ Carnegie Hall
Bjork's in the midst of a sold-out seven-show run in NYC supporting her powerful new album, Vulnicura. She'll be performing with her Vulicura collaborator Arca, plus percussionist Manu Delago and 15-piece chamber ensemble Alarm Will Sound.

Lauryn Hill @ Cutting Room
Laughing in the face of Bjork's mere seven-show run, Lauryn Hill is the midst of a nine-show NYC run. These shows have the neo-soul great stripping things down and playing acoustic. Tonight is show #6.

TOPS, Beverly, Blue Hawaii (DJ) @ Baby's All Right
With a love of smooth '80s pop, Montreal's TOPS craft their own beguiling melodies. Last year's Picture You Staring had one of 2014's best single, "Way to Be Loved." Tonight's show is sold out.

Lust For Youth, Ciarra Black @ Baby's All Right
Lust for Youth hail from the same Danish scene as Iceage and Lower, and while they share those bands' knacks for melodramatic performances, they substitute punky guitars for danceable synths. Tonight's their second of two NYC shows on this tour.

Craft Spells, The Bilinda Butchers, Foxes in Fiction, Heavenly Beat @ Brooklyn Night Bazaar
Craft Spells released their second album, Naseua, via Captured Tracks last year which took them into more pastoral sonic landscapes than we'd heard them do previously. As for their tourmates, The Bilinda Butchers, it might not surprise you that a band whose name references My Bloody Valentine's other singer/guitarist might have shoegaze tendencies.

Flowers of Evil, Zuli, Shark Week, The Jeanies @ Cake Shop
Flowers of Evil features Brandon of Crocodiles as well as members of SISU and A Place to Bury Strangers and is their homage to sneary, old school UK punk.

Twerps, Ultimate Painting, EZTV @ Mercury Lounge
This is a terrific triple bill for lovers of smart, tuneful jangly indie rock. Australia's Twerps' terrific new album Range Anxiety recalls The Clean and The Pastels; Ultimate Painting feature members of Veronica Falls and Mazes and channel the Velvet Underground (by way of The Grateful Dead); and Brooklyn's EZTV's ringing sound owes a little to early-'80s bands like The dB's or Tommy Keene.

The Church, The Sharp Things @ Rough Trade
Alt-rock vets may be best known for "Under the Milky Way," but these Australians have a consistent, strong catalog of albums full of shimmering guitar rock. Marty Willson-Piper's presence will be missed, but seeing them at an intimate venue like Rough Trade will be a real treat.

The Cribs, Cold Fronts, The Vansaders @ Saint Vitus
Wakefield, UK's finest, The Cribs were adding "Whoa Oh" choruses to their songs long before it became a hitmaking standard. They're back with a very good new album (produced by Ric Ocasek) and this is the final of three sold-out NYC shows.

Palma Violets, Sunflower Bean, Hinds, Show Me the Body @ Shea Stadium
UK band Palma Violets offer up big hooks and laddish camaraderie; their new album, Danger at the Club, is out in May. They're over playing small clubs before SXSW and tonight should be special for them as Shea was the first place they played in America. The show is sold out and if you're going don't miss Spain's charmingly shambolic Hinds (whose first US show is this one).

The Guilty Party, Corporal, Up The Chain @ Bowery Electric
Originally from Louisville, KY, Corporal have been making indie rock since the early '00s. You may recognize frontman Michael Shannon from the many creepy, intense characters he plays on television and in the movies.

Have Mercy, Weatherbox, You, Me and Everyone We Know, Head North, On Your Marks @ The Studio at Webster Hall
The band we're most excited about on this bill is Weatherbox, who's genre-defying Flies In All Directions was one of our favorite albums of 2014.

Lace Curtains, OxenFree, Nailpolish, The Brooklyn What @ Union Pool
Ex-Harlem singer Michael Coomers released his second album under the Lace Curtains name, A Signed Piece Of Paper, last fall on his own Female Fantasy Records. The album has some indie rock a la Harlem but there's a strong '70s singer-songwriter vibe to it as well.

John Mulaney @ Carnegie Hall
His bid at sitcom stardom didn't work out so well -- we're waiting for an all Too Much Tuna show -- but John Mulaney has probably already mined that experience for jokes, and his standup remains great.