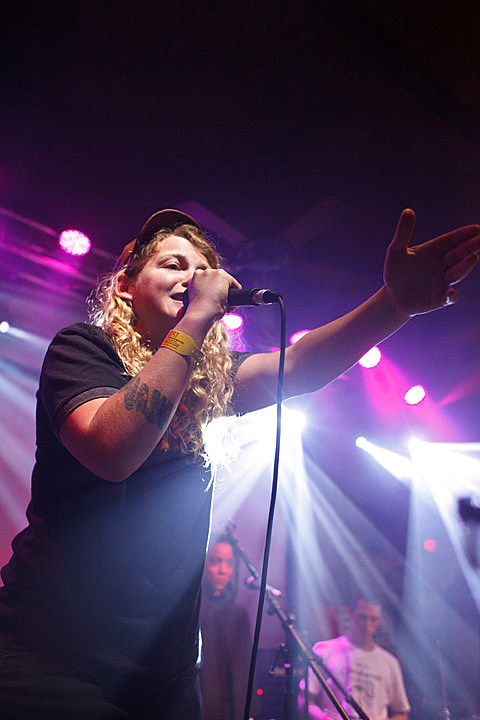 Action Bronson @ Terminal 5
Chef-turned-rapper Action Bronson releases his new album, Mr Wonderful, this week and is celebrating with two big shows at Terminal 5. Tonight's sold out but you can still get tickets to Wednesday's show.

Jon Spencer Blues Explosion @ Cake Shop
The JSBX release their cracking new album Freedom Tower: No Wave Dance Party 2015 this week and are celebrating by playing shows in every borough. Tonight brings them to NYC's Cake Shop and to get tickets you need to buy the album at Other Music.

Taking Back Sunday, The Menzingers @ The Paramount
Long Island emo vets TBS released Happiness Is in 2014 which was made with the same lineup that produced 2002's Tell All Your Friends. Philly punks The Menzingers and LA's Letlive open.

Kate Tempest, Jack Garratt @ Mercury Lounge
She's an award-winning poet and just-published novelist, but Kate Tempest is at her most immediate as a rapper, as heard on last year's very good, gritty Everybody Down. This is her first of two sold-out NYC shows this week.

Hess is More, HITS, Lily McQueen @ Mercury Lounge
The eight-piece lineup of Hess Is More bring their jazzy/krauty/funky sound to Nublu as part of a four-night residency. If you like DFA style dancerock, they're worth checking out.

Tsu Shi Ma Mi Re, Quorum, The Fin., Zarigani$, Bo-Peep, Samurai Dynamites @ Knitting Factory
This show is being billed as "Japan Night" featuring a whole bunch of groups from that country fresh from performances at SXSW.

The Wharton Tiers Ensemble, Martin Bisi, Tenterhooks, Secret Numbers @ The Rock Shop
Between the two of them, audio engineers Wharton Tiers, and Martin Bisi have worked on records by some of the biggest names in the '80s no-wave scene. They are both musicians as well, and are on the same bill this evening.