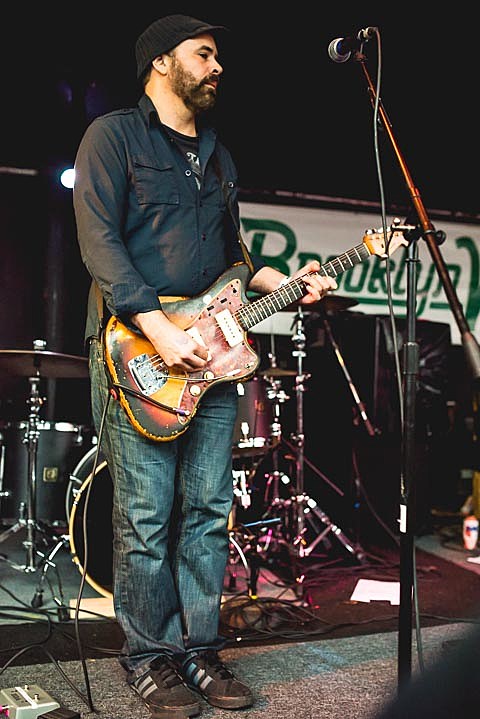 Swervedriver, Gateway Drugs @ Music Hall of Williamsburg
Arguably the heaviest, most rocking of the original UK shoegaze acts, Swervedriver returned this year with their first new album since the '90s -- and it's pretty damn good. But expect to hear favorites like "Duel" and "Rave Down," too, at their NYC shows this weekend.

Patti Smith & Jesse Smith @ Le Poisson Rouge
Punk pioneer and NYC icon Patti Smith has been giving a variety of performances lately, and this one's a collaboration with her daughter Jesse for the "Hands On Live" benefit concert, which raises funds for Terakoya, "a new naturopathy clinic/workshop to be built in the upstate Catskill Mountains."

The Get Up Kids, PUP, Restorations @ Stone Pony
Nineties-era greats The Get Up Kids last reunited in NYC before every '90s emo band you could think of started doing the same thing, and now they're finally back for another round. They don't hit NYC proper, but will be in NJ tonight and Long Island tomorrow. Great openers too: poppy Canadian punks PUP and Philly's heart-on-sleeve rockers Restorations.

La Dispute, Title Fight, The Hotelier @ Webster Hall
This is a killer triple bill with two always-progressing co-headliners -- La Dispute whose newest stuff is progressive post-hardcore with a hint of spoken word, and Title Fight who are currently toeing the line between punk and shoegaze. Cathartic emo band The Hotelier open the show. Sold out.

Jon Spencer Blues Explosion @ The Point
The JSBX released their cracking new album Freedom Tower: No Wave Dance Party 2015 this week and are celebrating by playing shows in every borough. Tonight takes them to the Bronx where they'll play a benefit for Hunts Point community center The Point.

Har Mar Superstar, Kahli Abdu, VHS Safari @ Knitting Factory
A fearless and funny performer, Har Mar Superstar brings the party -- and his R&B/rock/pop songs -- to wherever he plays. This one starts at 11:30 PM and will go late.

Tobias Jesso Jr., Okay Kaya @ Baby's All Right
Canadian singer-songwriter TJJ recalls the early-'70s days of Harry Nilsson, Randy Newman and John Lennon on his new album, Goon. Will he live up to the hype?

The Budos Band, Spires @ Brooklyn Bowl
Where their first three albums traffiked in funky afropop, the Budos Band went heavy (as in almost proto-metal) on last year's Burnt Offering which works a lot more organically than you might think. This is their first of two Brooklyn Bowl shows.

Dropdead, Fucking Invincible, V-Sect, Narcoleptics @ The Acheron
Providence hardcore vets Dropdead have been going strong since '91 with most of their original lineup, and their newest material is just as crushing as their classic stuff. Fucking Invincible are not to miss either.

Las Rosas, Boytoy, Threats (members of Drowners), Winstons @ Alphaville
It's a gaggle of garage rock in the back room of Bushwick bar Alphaville tonight, headlined by the very '60s-ish Las Rosas.

Ceremony @ Kinfolk 94 (6:45 PM)
Ceremony's upcoming new album has them moving even further away from their powerviolence roots, this time towards something that sounds inspired by Joy Division. They'll be playing songs from that album at this intimate, early show tonight.

Bob's Burger's Live @ Beacon Theater
The entire main cast of FOX's charming animated sitcom are on hand for this event tonight for individual standup segments, a table read of an upcoming episode and an audience Q&A.