Doldrums at Bowery Ballroom in 2014 (more by Amanda Hatfield) 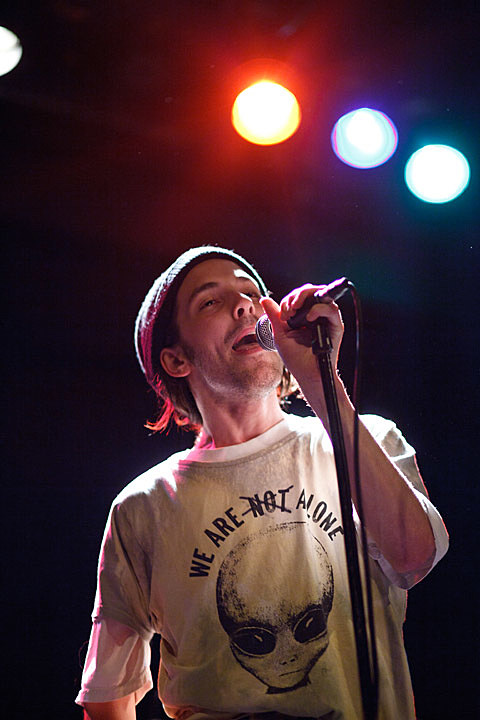 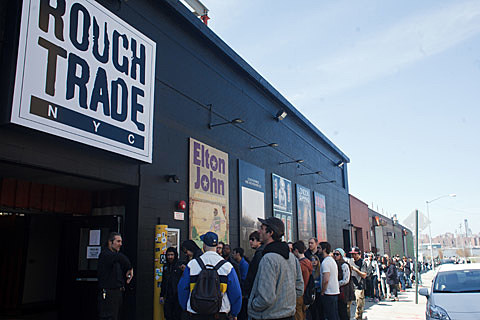 Don't forget the L Train is not running between 8th Ave and Bedford Ave this weekend, so plan accordingly. You can browse our full NYC show calendar for all of tonight's shows, but here are some highlights...

Record Store Day
It's maybe gotten a little out of hand (a lot out of hand) with all the exclusive releases but any day that encourage people to go buy records in actual record stores is okay by us. Expect lines and for the hot-ticket items to go quick, so get there early. Or you can just go and see some live in-store performances, or drink some free beer. Check out our guide to events for more info.

Dresden Dolls, Buzzcocks (signing), Kim Gordon (book signing), Lord Raja, Special Guests, Saun & Starr, Howlin' Rain, Lee Bains III & The Glory Fires @ Rough Trade
Rough Trade has the most going on Saturday. Having either Record Store Day or Dresden Dolls perform for free would be enough to pack the place. Today you get both, plus Kim Gordon and Buzzcocks stopping by to sign stuff, and more performances. All free. The records, you gotta pay for.

Doldrums, Moon King, Malory @ Baby's All Right
Airick Woodhead's new album as Doldrums is both poppier and dancier than anything he's done before, while remaining resolutely of odd. Moon King, which is fronted by Airick's brother Daniel, both open the show and play as a part of Doldrums live band. They're both exciting live bands, recommended. Midnight show.

The Juan Maclean (live), Matt Cash (DJ set), Learning Center (live), Gavin Russom (live), Beto Cravioto (DJ set), The Juan Maclean (DJ Set) @ Cameo Gallery
While they're mainstays on the DJ circuit, it's been a long time since The Juan Maclean actually played live. To get back into the swing, they're doing a six-night Brooklyn residency, starting tonight with three shows at Cameo then next week at Union Pool. Tonight's show is sold out, but tickets will be available at the door for the afterparty featuring Juan & Nancy and others on DJ duty.

The Album Leaf, Drop Electric, The Tablets, Han Demo @ Brooklyn Night Bazaar
Jimmy LaValle's long-running post-rock project The Album Leaf has been at it since the '90s, though they haven't put out a new album since 2012. Jimmy did do the soundtrack to the movie Spring this year though. Maybe we'll hear some of that.

Cosmonaut, Turnip King, Baby Acid, Acid Dad @ Alphaville
Chill out in Alphaville's new performance room and check out a nice bill of local indie rock, including the Strokes-y pop of Cosmonaut and the '90s-ish sounds of Sea Cliff, LI's Turnip King. Plus: two bands with "Acid" in their name. Trippy!

Seoul, Ballet School @ Knitting Factory
Montreal's Seoul make featherlight pop that is laid-back but engaging, owing to much to the hushed cool of '80s groups like The Dream Academy and The Blue Nile. Tonight's show is with Bella Union band Ballet School.

The New Lines, Pale Lights, Ghost Gum, DJ Keith D'Arcy @ WFMU Monty Hall
WFMU's new performance space, named after everyone's favorite Let's Make a Deal host, has been putting on some good show, and this is an fine night of indiepop, featuring the analogue synth baroque sounds of The New Lines, and C-86 style jangle of The Pale Lights.

Jeff Beck, Tyler Bryant @ Capitol Theatre
Guitar legend Jeff Beck (of The Yardbirds, The Jeff Beck Group and more) is in the midst of a multi-night NYC-area run with Jimmy Hall, who fronted the '70s southern rock band Wet Willie, on vocals.

Daddy Long Legs, Muck & The Mires, The Lonely Teardrops @ Bowery Electric
Daddy Long Legs are one of the newer bands on trusty garage rock label Daddy Long Legs, but they owe a lot of their sound to the label's veterans. If you lose those bands, you may dig DDL too.

Viking, Possessor, Attacker, Iron Force @ Saint Vitus
LA thrash metal vets Viking put out two full lengths on Metal Blade in the '80s, but then broke up by the end of the decade. But they've been back for a few years now, and this past March they put out their first new album in over 25 years.