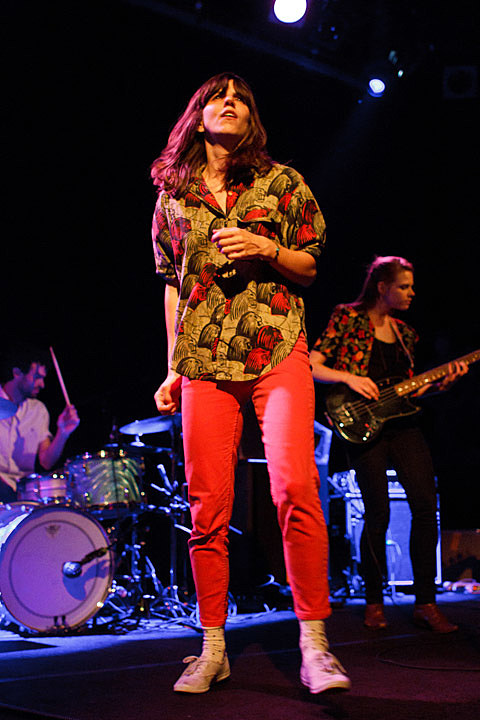 Eleanor Friedberger, Cassandra Jenkins, Lily McQueen @ Rough Trade
Eleanor Friedberger has been chilling on the West Coast, writing and recording her new album for Merge. She's back in Brooklyn now and will be giving some of her new songs a spin tonight.

WFMU Record Fair @ Brooklyn Expo Center
Calling all crate-diggers: the annual vinyl fantasia hosted by WFMU moves across the East River this year into the brand new Brooklyn Expo Center. In addition to all the used wax, there are live perforamnces and beer and snacks. You can get two bucks off admission with our coupon.

Eric Clapton @ MSG
Eric Clapton is nothing short of a legend, with influential material recorded with Cream, Derek & the Dominoes, Blind Faith, The Yardbirds, John Mayall & the Bluesbreakers, and in his lengthy solo career. Tonight's the second of two MSG shows this weekend, in celebration of his 70th birthday.

Underdog, Living Laser, The Mistaken @ Saint Vitus (afternoon show)
NYHC vets Underdog combined their hardcore roots with reggae and sounds closer to traditional rock. They've been reunited for a while now, but chances to see them are still infrequent.

Doyle, Heavygrinder, Blackest @ Saint Vitus
Former Misfit Doyle formed his eponymous band a few years back and released the album Abominator in 2013. He's currently on tour playing songs off that album, and you'll likely hear a few Misfits tunes too.

Krieg, The Banner, Outer Heaven, Stinger @ Acheron
Neil Imperial is a veteran of the USBM scene, and one of his roles is leading the band Krieg, who released Transient, their first album since 2010, late last year.

ZZZ's, LODRO @ Baby's All Right
Japanese trio ZZZ's make noisy, shriiiing-y, intense postpunk skronk. They're gearing up for Austin's Levitation Fest with a few Brooklyn shows this weekend. See 'em tonight with Brooklyn's moody LODRO. Doors are at 11 PM so you can watch Mad Men and Game of Thrones and still make the show.

Spandau Ballet @ NYCB Theatre at Westbury
Best known for syrupy '80s ballad "True," Spandau Ballet were originally of the artier bands in the UK New Romantic movement. The original lineup -- including brothers Gary & Martin Kemp -- are back together and touring for the first time in ages. Also recommended is Spandau Ballet doc Soul Boys of the Western World which is currently showing at IFC Center.