photo: Santigold at Bowery Ballroom in 2012 (more by David Andrako) 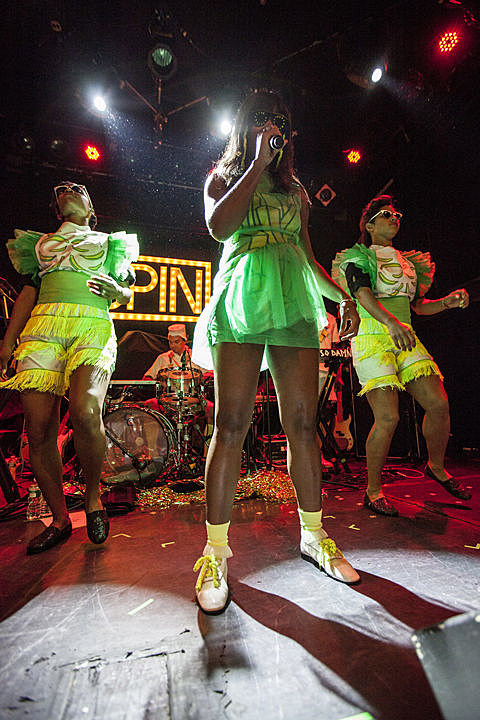 Faith No More, Le Butcherettes @ Webster Hall
Though they had fluke hit with "Epic," Faith No More have always been a deeply strange band, blending disparate music styles into something truly their own. Out next week, their new album Sol Invictus is their first since 1997. They celebrate tonight at what is a very small venue for them.

Mac McCaughan, Ryley Walker, Flesh Wounds @ WFMU Monty Hall
Though he ostensibly went solo with his Portastatic albums, Superchunk's Mac McCaughan released his first-ever album under his own name this year. He'll be backed tonight by Flesh Wounds, who will do their own opening set. Psych-folk singer Ryley Walker also plays. That's a good show.

Nicholas Nicholas, Whitewash, No Shoes, The Britanys @ Aviv
Whitewash make make moody, textural rock with some jazzy tendencies and their debut album, out next week, is well worth a spin.

Mystic Braves, The Blank Tapes, Spirit Plate @ Baby's All Right
Los Angeles's Mystic Braves look like they've been transported from 1966 and that's pretty much what they sound like too: 12-sting guitars, surfy leads, combo organ, the occasional flourish of Spanish horns. They just played Levitation Fest in Austin last weekend.

The Unders, Flower Girl, The Rizzos, Tall Juan @ Union Pool
Originally from Buenos Aries, Argentina, Tall Juan has been making music in NYC for a couple years now, and you may have seen him playing with another Juan (Wauters) at shows recently (and as part of The Beets). Like Wauters, he makes ramshackle, garagey folk-pop.

Agent Orange, In the Whale, SickWalt @ Saint VItus
One of the first-ever surf punk bands, Agent Orange is still at it (with frontman Mike Palm as the only original member) three and a half decades after their essential 1980 Bloodstains EP.

Battle Ave, O-Face, Groam & Joan son of Groam, Happy You @ Palisades
Battle Ave make chilled-out, reverby indie rock (it makes sense that they share a producer with Real Estate), and they've got some great melodies and harmonies in there too.

Tanlines, Mas Ysa @ Bowery Ballroom
Brooklyn dancepop duo Tanlines embrace guitars, drums and other acoustic instruments on their new album, Highlights, which is out next week. They celebrate early tonight. Sold out.

Skaters, Team Spirit, The Bergamot, Justin Miller (DJ Set) @ Brooklyn Night Bazaar
Brooklyn Night Bazaar closes in a couple weeks and their are only a few shows left. It's not usually open on a Thursday but this is part of Jack Daniels' "Signature Blend" series that you need to RSVP to attend. This one is 21+ as well.

Jeffrey Lewis and The Jrams, Gold, A Deer is a Horse @ Mercury Lounge
Witty, thoughtful songwriter Jeffrey Lewis plays his NYC hometown regularly and any chance to see him is one worth taking.

Santigold, Va$htie @ Music Hall of Williamsburg
We haven't heard any new music from Santi in a while, but hopefully she'll fill us in on what's up at this Steve Madden-presented free show (which is RSVP'd out).

Miho Hatori @ Ace Hotel
This is the first in a free Ace Hotel series called "New Optimism" and tonight features Cibo Matto's Miho Hatori who has also designed some art cards just for the occasion. Luaka Bop is providing DJs.

The Chris Gethard @ UCB Chelsea
Chris will soon make his cable debut on the Fusion Network, but tonight he's doing his last live rehearsal for it. "It's going to be both a great time and a stressful lovable clusterfuck." Sold out.