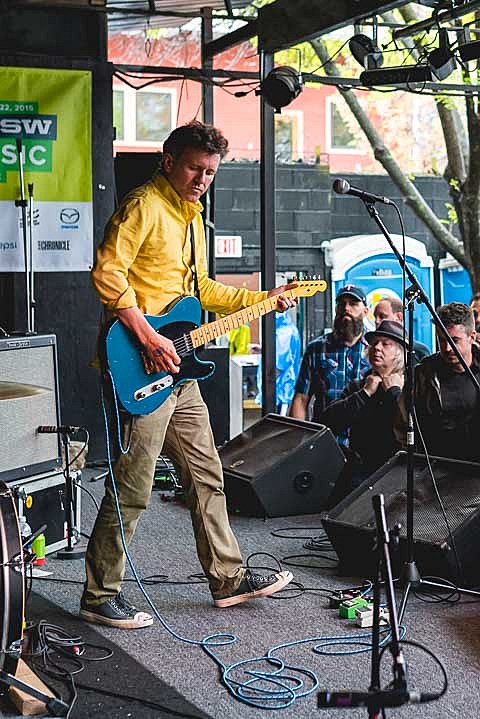 Brooklyn Flea Record Fair @ Smorgasburg
The bi-annual vinyl extravaganza is back with tables from labels, some of your favorite local record stores, and used vendors. There's also Minimal Wave cupcakes and a host of DJs -- Wild Nothing's Jack Tatum among them -- and tons and tons of records.

Mac McCaughan, Flesh Wounds, And The Kids @ Baby's All Right
Though he ostensibly went solo with his Portastatic albums, Superchunk's Mac McCaughan released his first-ever album under his own name this year. He'll be backed tonight by Flesh Wounds, who will do their own opening set.

Lightning Bolt, Oneida @ Le Poisson Rouge
Lightning Bolt returned this year with their sixth album, and it has them sounding as chaotic and noisy as ever. They continue to put on the kind of wild live shows that you just have to see to believe, and tonight's sold-out gig is a good bill all around with another regular in the noise/avant-garde scene, Oneida.

Storm Rave w/ Frankie Bones, Adam X, Heather Heart, Lenny Dee, Rob Gee @ Secret Warehouse
Frankie Bones was a key player in the NYC '90s underground dance music scene with his wild Storm Rave parties. He hasn't thrown one in 22 years, but that will change tonight. Joining him is a lineup of other veterans of that same NYC scene. Part of the Red Bull Music Academy, it maintains the old spirit by keeping the locale a secret.

Full of Hell, The Body @ ABC No Rio and Saint Vitus
Wild hardcore kids Full of Hell and sludge/drone metallers The Body are currently on the road together destroying ear drums across America together, and today they roll into NYC for two shows. First they play a 3 PM matinee at ABC No Rio with Radiation Blackbody and Through Thorn and Brier, and then at night they hit Vitus with Water Torture and Mother Brain.

Crosby, Stills and Nash @ Kings Theatre
Folk rock as we know it wouldn't be what it is today without Crosby, Stills & Nash, who continue to inspire new groups and whose classic material still sounds timeless. Tonight's their second of two shows at Brooklyn's newly-reopened Kings Theatre.

Brian Wilson @ State Theatre
The mastermind behind The Beach Boys (and thus, some of the most influential pop music ever) Brian Wilson released a new solo album this year, and he'll be spending some time on the road too. His proper tour (with Rodriguez) comes to the NYC-area for two shows this summer, but first he plays New Brunswick's State Theatre Benefit Gala tonight, just outside of NYC.

Roy Ayers, Rich Medina @ Output (the roof)
Master of good vibes (literally), soul/jazz legend Roy Ayers plays the kickoff of Output's roof series. Rain is in the forecast but let's hope his "Everybody Loves the Sunshine" spirit keeps the clouds away. Doors are at 2 PM and Roy goes on around dusk -- it's free before 5 PM if you RSVP.

A Place to Bury Strangers, Sleepies, Pill, Bambara @ Brooklyn Night Bazaar
We were super bummed to hear Brooklyn Night Bazaar lost it's lease and will have to be out by the end of May. But there are still some good times left, so take in the mini golf, ping pong, beer, snacks and music, which tonight includes a pretty awesomely noisy lineup of A Place to Bury Strangers and lots more. A good one.

The Feelies @ The Bell House
NJ indie rock legends The Feelies don't play that often (or far away from home) so please cherish when you get a chance to see them. They reward with long sets, still-great playing and some unexpected covers.

Psychedelic Furs, Black English @ Wellmont Theatre
It's still okay to dance like Molly Ringwald, especially when seeing Richard and Tim Butler's veteran alt-rock group trot out on the hits. "Love My Way," "Into You Like a Train," and "President Gas" still sound great.

Wild Nothing, Journalism @ Music Hall of Williamsburg
Jack Tatum is currently finishing up work on the third Wild Nothing album (Nocturne came out in 2012). While no details on that have been announced, they'll be playing new songs tonight at this free show (you had to RSVP which is now closed).

Obnox, Uniform, Ballroom @ WFMU Monty Hall
Lamont "Bim" Thomas just released Know America, his second album this year under the Obnox moniker (Boogalou Reed came out back in January), continuing his hot creative streak. It's a concept album about hijacking a radio station to bring his vision of rock n' roll to the airwaves. His vision is blown-out but very soulful and goes well beyond typical garage rock. There's a lot going on besides just fuzz. Also on the bill: ex-The Men/Drunkdriver noise duo Uniform.

Mike Gent (of The Figgs) and Doug Gillard @ Hi-Fi Bar
Both The Figgs and Doug Gillard probably played 169 Avenue A a bunch of times back when it was Brownies, so it's nice to have them back in a familiar setting at Hi-Fi.

Madam West, Looms, Piers, Whitewash @ Baby's All Right
This is a free afternoon matinee, so stop by Baby's All Right have some brunch, hit the bloody mary bar and enjoy some up-and-coming bands. On the bill: Whitewash, who make make moody, textural rock with some jazzy tendencies.

The Spits, Pampers, CCR Headcleaner, Tournament @ The Wick
Keeping alive the sound of the Ramones, but maybe even sleazier, The Spits roll through NYC tonight to help celebrate the Acheron's fifth anniversary (though the show is at nearby venue The Wick). It's a great bill of punk/garage openers all around too.

The Flex, Red Death, NYC Headhunters @ Acheron
While the Acheron is celebrating its 5th anniversary at The Wick tonight, it's still hosting its own show too, and it's a good one. Furious UK hardcore band The Flex headline, and before them it's the killer crossover thrash/d-beaters Red Death from DC. Locals NYC Headhunters (mem Vanity) open.

Sick Feeling, PC Worship, Psalm Zero, VHVL, James Place DJs @ 'The Maze' at SELECT Art Fair
Ever wanted to see a bunch of bands play inside a giant maze on the roof of the former Dia Center building? Well you're in luck, as the You Are Here Festival does just that. It's part of the SELECT Art Fair, and tonight features punks Sick Feeling and noisemakers PC Worship.

Peelander Z, Tornavox, Bodega Bay @ Knitting Factory
As anyone who's ever seen them knows, Japanese Action Comic Punks Peelander-Z put on an unforgettable live show, and it's a ton of fun.

Traxman, The Present @ Elvis Guesthouse
Traxman hails from the same Chicago footwork scene that gave us the late DJ Rashad (who he recently paid tribute to). Tonight he'll keep the dancefloor moving at new Ave A party spot Elvis Guesthouse.

Trance Lords, Ian Isiah, Iceboi, Doss, Will Fry, Imogene, Mr UNO NYC & Ms Norelation, special guests @ Palisades
It's the fourth anniversary of underground NYC dance label UNO, which in that time has given us Arca, Mykki Blanco, Fatima Al Qadiri, and more great artists. Special guests are promised tonight. Who could they be?

The Roadside Graves, Peter Stampfel & the Ether Frolic Mob, Out Of System Transfer, Folk Y'all @ Kings County Saloon
NJ folk rockers Roadside Graves haven't released an album since 2011's We Can Take Care of Ourselves, but they're still going as a live band. Tonight they play with folk legend Peter Stampfel.

Jay Z @ Terminal 5
This is Jay Z's first of two shows this week at Terminal 5, a very small venue for a guy who's played multiple nights in a row at Barclays Center. And on top of that, he's promising old songs and deep cuts that he doesn't play live often, which is a pretty amazing treat for a guy with twelve albums ranging from good to great, who usually does hits-filled setlists. The only way in was to enter through TIDAL's contest which is now closed.