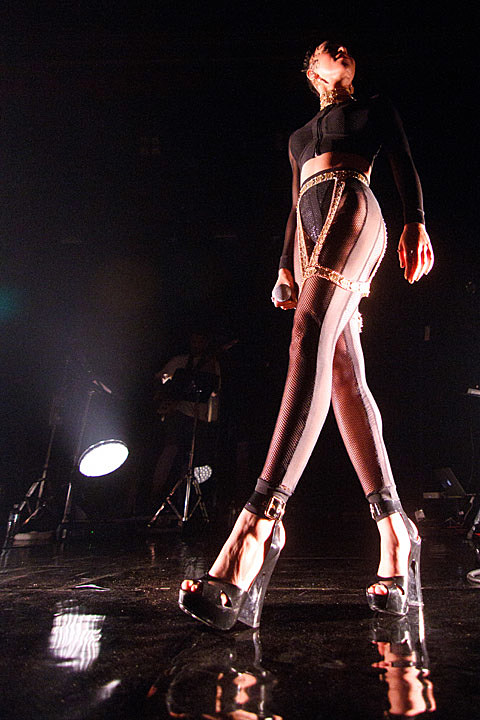 FKA twigs @ Brooklyn Hangar
FKA twigs has always incorporated dance and fashion into her persona, but apparently these three shows at Brooklyn Hanger are going to be more that a concert. Titled "Congregata," she says they're "an insight into my mind, my roots, my inspirations. a swelling conceptual performance using dance, performance and my music to date to create a world that I want you to share with me." Wearing Alexander McQueen and armed with 10 dancers, this two-hour performance piece should be something. Sold out.

Black N' Blue Bowl @ Webster Hall
While Skate & Surf goes down just outside of NYC, a different kind of punk festival goes down right in the heart of the city. Today's lineup includes a reunion from Revelation Records hardcore boundary pushers Burn, another reunion from crossover thrash vets Crumbsuckers, hardcore lifers Sick Of It All, Boston traditionalists The Rival Mob, Dave Smalley (performing Dag Nasty, All and Down By Law), and many more.

Dorthia Cottrell, Nate Hall, Serpentskirt @ Acheron
With Windhand, Dorthia Cottrell makes crushing melodic doom, but on her own she favors an acoustic guitar over walls of distortion, and makes something closer to psychedelic folk. Her tour with Nate Hall of US Christmas hits NYC tonight.

Frankie Cosmos, Gingerlys, Lost Boy? @ Brooklyn Bow Wow
Brooklyn Bow Wow is a doggy day care, and they're describing tonight's show as "a first ever pups & humans concert." They add, "there will be a bar and plenty of pooches to jam out with." Twee folk singer Frankie Cosmos headlines.

Jay Z @ Terminal 5
This is Jay Z's second of two shows this week at Terminal 5, a very small venue for a guy who's played multiple nights in a row at Barclays Center. And on top of that, he's promising old songs and deep cuts that he doesn't play live often, which is a pretty amazing treat for a guy with twelve albums ranging from good to great, who usually does hits-filled setlists. The only way in was to enter through TIDAL's contest which is now closed.

EMEFE, Will Butler (DJ Set), The Rad Trads @ Baby's All Right
NYC band EMEFE make widescreen funk-pop that sounds a bit like if Talking Heads got their start at Minneapolis' First Avenue instead of CBGB. Their just-released eponymous LP is a concept album based on French Revolution-era writer Jacques Lusseyran's book And There Was Light (stream it below), and they celebrate tonight. Arcade Fire's Will Butler is your DJ.

And The Kids @ Elvis Guesthouse
Boston-area band And The Kids make what they call "accessible unconscious existential indie glitter popsicle crisis music." You can hear exactly what that sounds like on their debut album, Turn To Each Other (streaming below), and at Elvis Guesthouse tonight.

Miho Hatori, Zulu P, Diamond Terrifer/M. Beharie DJs @ 'The Maze' at SELECT Art Fair
Ever wanted to see a bunch of bands play inside a giant maze on the roof of the former Dia Center building? Well you're in luck, as the You Are Here Festival does just that. It's part of the SELECT Art Fair, and tonight's headlined by Cibo Matto's Miho Matori.

Filed Under: And The Kids, EMEFE, Will Butler
Categories: Music News, What's Going on Tonight in NYC
Comments
Leave A Comment
Back To Top