Laura Jane Grace w/ Against Me in Chicago, 2014 (more by Jeff Ryand) 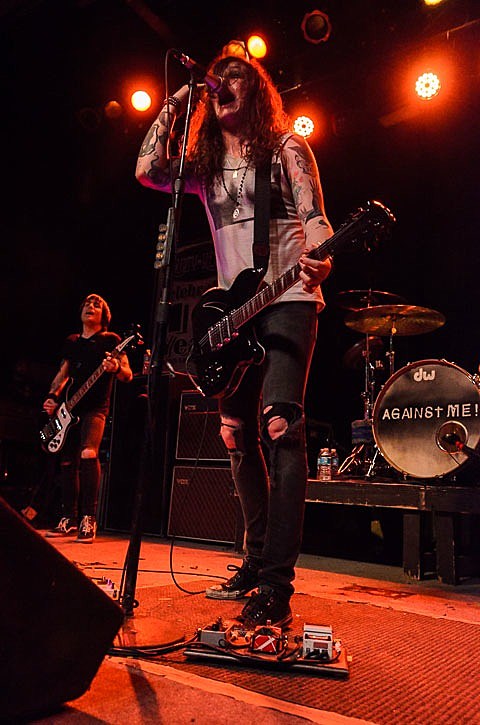 Laura Jane Grace @ City Winery
Laura Jane Grace has been up to a lot lately, including fronting one of the most vital punk bands around (Against Me!), covering The Replacements with Miley Cyrus & Joan Jett, and producing the new Worriers record. The whole AM! crew will be here for a free show in June, but tonight you can see Laura in solo mode.

Gracie, Blonde Elvis, Shark?, Gingerlys @ Palisades
Jesse James Laderoute is a maintstay in the quirkier side of Toronto's music scene, having played drums for Slim Twig, collaborated with Ell V Gore, and his own band Young Mother. His current concern is Blonde Elvis who make off-kilter glam somewhere between Brian Eno and Pulp. This is an all-around good bill with Shark?'s '90s-ish indie rock and jangly shoegazers Gingerlys.

Mary Epworth @ Living Room
Mary Epworth is, at this point, known mostly for being the sister of producer Paul Epworth (who has worked with Adele, Florence & the Machine, Bloc Party and more). That may change as her 2012 debut album, Dream Life, gets a very belated US release this week. Her blend of baroque pop and West Coast folky psychedelia is appealing.

Domino Kirke, Joan As Police Woman @ Baby's All Right
Domino Kirke has been performing in NYC for a good while now, and for her new EP Independent Channel she's collaborated with Here We Go Magic's Luke Temple. She's doing a Mondays at Baby's residency and tonight is especially notable as it's with Joan as Police Woman.

It's Memorial Day and there are a few other options, such as free concerts in Greenwood Cemetery and the NY Philharmonic at The Cathedral Church of St. John the Divine. Whatever you do, have a safe, fun holiday.