photo: Death in Chicago in 2014 (more by James Richards IV) 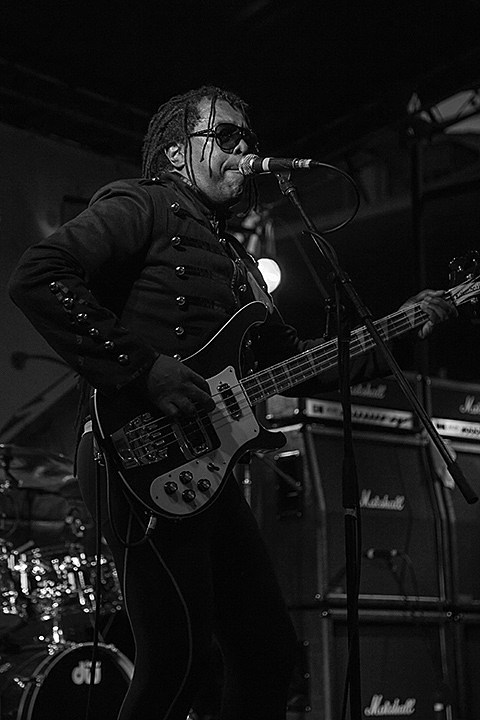 The Who, Joan Jett @ Forest Hills Stadium
The Who are currently on the road celebrating their 50th anniversary. Tonight's their third of five shows in the NYC-area, and second of three in NYC proper. At this point, they have enough hits to put out a double album compilation of them (which they did last year), and these shows are sure to be filled with them. The great Joan Jett opens on all dates.

The Just Joans, Working, The Chandler Estate, Pete Astor @ Baby's All Right (NYC Popfest)
Having played last night with The Loft, frontman Pete Astor (who was also in The Weather Prophets) will play solo today at this free NYC Popfest matinee. Pete, if you're reading this, please play "Like Frankie Lymon" today, okay?

Lloyd Cole (acoustic) @ The Bell House
It seems kind of painful to have NYC Popfest and this show happening seperately, as Lloyd Cole is one of the iconic '80s nose-in-a-book, heart-on-his-sleeve songsmiths. He's still very much the literate charmer

The Men, The Gotobeds, Savak (ex-Obits), Christines @ Cake Shop
This is the last of Cake Shop's 10th anniversary shows and they're going out with a bang. This seems like a great place to see Pittsburgh's awesome The Gotobeds, this is the first show from The Men in nearly a year, and it's the first-ever show from SAVAK (ex-Obits).

Death, Obnox @ The Studio at Webster Hall
You know the story by now: Detroit band Death makes a record in the '70s that predates and predicts punk rock, but it never comes out until Drag City releases it in 2009, and the band's continued as a live force since then. This year, they actually put out their first album of new music since the '70s, and we'll likely hear some of that as well as old favorites tonight. Opening is a much newer, similarly edgy punk band, Obnox.

Other Lives, Riothorse Royale @ Bowery Ballroom
Chamber pop trio Other Lives recently released their new album, Rituals, which is full of great atmospheres and harmonies, and you can tell it's the work of a band who have hung around Thom Yorke. (Atoms for Peace drummer Joey Waronker also co-produced it.) Tonight's their second of two NYC shows on this tour.

D.R.I. @ Blackthorn 51
D.R.I. helped pioneer that the crossover thrash genre that really came into fruition in the mid-late '80s, and thanks to bands like Power Trip and Iron Reagan, is still getting kids going wild today. They haven't released new music in a while, but they're going strong as a live band.

Steven Wilson @ Best Buy Theater
Porcupine Tree's Steven Wilson recently put out a new solo album, Hand. Cannot. Erase, which is inspired by the true story of Joyce Vincent, whose body went undiscovered for two years in her own apartment. It's also got his epic prog stylings very much intact. Tonight's his second of two NYC stops on this tour in support of the album.

Drew McDowall, StatiqBloom, Two from the Eye, York Factory Complaint @ The Acheron
For a night of music of the noise/electronic/industrial variety, this whole bill is pretty stacked. Coil/Psychic TV's Drew McDowall headlines the show.

Nine of Swords, Ex-Breathers, Stove, Washer, Cop @ Aviv
Especially of note on this bill is hardcore rippers Ex-Breathers, who are in town from Florida. Joining them are a few solid local bands, including Stove, the new project of former Ovlov singer Steve Hartlett.

Bill Frisell @ The Appel Room (Lincoln Center)
In this performance titled "Up & Down The Mississippi Traveling Highway 61," iconic guitar master Bill Frisell "embarks on a musical journey along the revered route, which Bob Dylan famously immortalized in 1965."

Marcos Valle with Carlos Lyra @ Birdland
Brazil's Marcos Valle has had a long career, stretching back to the '60s. But he may be best known now for his 1982 single "Estrellar" which was used in a Southern Comfort ad shown a lot during last year's World Cup telecasts. Fans of samba, bossa nova, jazz, disco and kitschy fun take note -- tonight's the last night of his Birdland run.