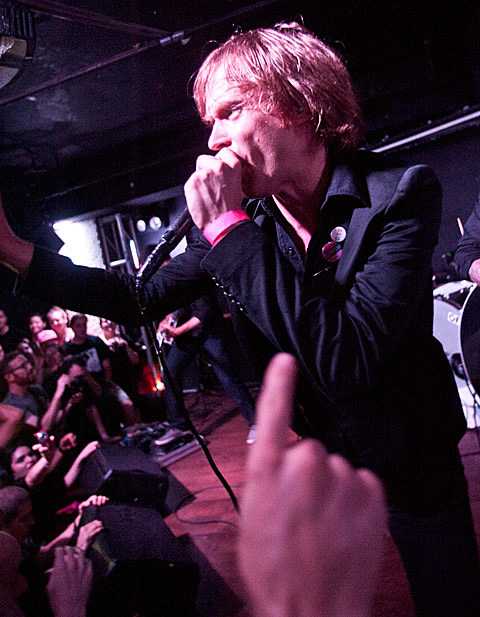 Refused, War on Women @ Bowery Ballroom
Refused are planning on releasing their first album in 17 years this year. We haven't heard the whole thing yet, but from those two singles it sounds kinda... poppy? Could be interesting. Meanwhile, fans of the band's heavier stuff, like 1998's classic The Shape of Punk to Come should be treated to many favorites tonight. They've been playing a lot of that one on tour. Make sure to get there early for War on Women, whose political punk is very good. Refused do it again tomorrow at MHOW with Creepoid.

The Tallest Man On Earth, Hiss Golden Messenger @ Beacon Theatre
The Tallest Man On Earth's new album has him experimenting with more complex arrangements than his usual voice/guitar setup, and to reflect that live, he's currently on his first-ever tour with a full band. Tonight's the second of two NYC stops with opener Hiss Golden Messenger, who is not to be missed.

Wire, Julian Lynch @ Music Hall of Williamsburg
Art-punk greats Wire are like a shark, always moving forward, never the same twice but always themselves. This year's self-titled album is another terrific moment in a nearly 40-year career. They play some oldies too, and on this tour look out for "Silk Skin Paws" and "Boiling Boy," both from 1988's A Bell is a Cup Until it Is Struck.

Chaka Khan @ Prospect Park
Celebrate Brooklyn! kicks off it's tonight with this free concert ($3 suggested donation) by the "Queen of Funk" Chaka Khan whose hits include "I'm Every Woman" and "I Feel for You."

Ash, Boytoy, Zerobridge @ Rough Trade
Irish trio Ash started as teens in the '90s and became genuine stars in the UK thanks to a string of punky, pop singles like "Girl From Mars," "Goldfinger" and "Oh Yeah." Nearing their 40s, they just released their first album in eight years and play this record release show before opening for Ride at Terminal 5.

Heat, Las Rosas, Monograms @ Union Pool
With a sound somewhere between the Jesus & Mary Chain and The Strokes, Montreal band Heat are equal parts hooks, melody and attitude. Local band Las Rosas are worth catching too.

The Woggles, WYLDLIFE, Sunshine and the Rain @ WFMU Monty Hall
Georgia garage-rock revivalists The Woggles, who've been reviving garage rock for nearly 30 years, are known for their crazed stage show and stomping tunes. They still pack a punch.

Sharkmuffin, The Cigarette Burns, Digital Leather, Daywalkers @ Cake Shop
Digital Leather is the project of Shawn Foree, who was in a previous incarnation of Destruction Unit, and the band also now includes The Faint's Todd Fink. They make synthy, gothy post-punk with a pretty strong Joy Division influence.

Jon DeRosa, Bootblacks, La Cruor @ Saint VItus
Jon DeRosa has been in band dating back to the '90s including Dead Leaves Rising, Aarktica and Pale Horse and Rider, and tonight he's celebrating his second-ever solo album, Black Halo, which features Stephin Merritt, Carina Round and more.

Mumford & Sons, The Maccabees, Son Little @ MCU Park
Mumford & Sons abandoned their folk pop style on their new album for something a little more Coldplay-esque. On the other hand, The Maccabees' new single seems to suggest they're returning a bit to their more rocking roots. Tonight's their second of two shows at Coney Island's MCU Park.

Florence + the Machine @ iHeartRadio Theater
Like most shows at iHeartRadio Theatre, this offers a chance to catch  performers in a space much smaller than they normally play, but tickets are given out through contests. This is definitely an intimate spot for Florence who'll play Governors Ball this weekend.