photo: Ride at MHOW on Monday (more by PSquared) 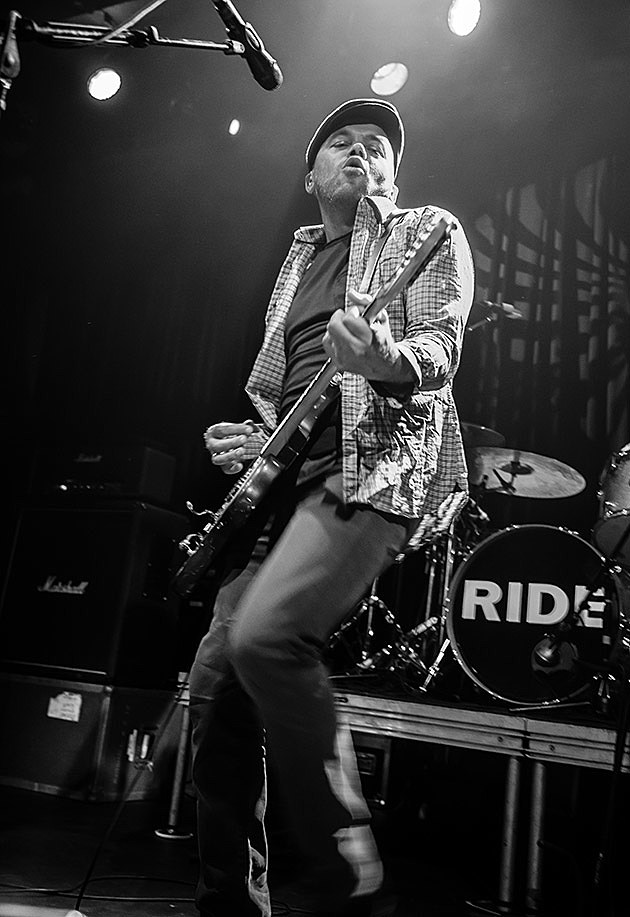 Ride, Ash @ Terminal 5
While lumped in with shoegaze, Ride were poppier than most bands of that era, and more of a psychedelic rock band than anything else. A great one, mind you, with an incredible rhythm section, and maybe sounding better than ever. It's good support tonight from Irish trio Ash whose faces were splashed across the NME around the same time.

Wire, Julian Lynch @ Bowery Ballroom
Art-punk greats Wire are like a shark, always moving forward, never the same twice but always themselves. This year's self-titled album is another terrific moment in a nearly 40-year career. They do play some oldies, too.

Refused, Creepoid @ Music Hall of Williamsburg
Refused are planning on releasing their first album in 17 years this year. We haven't heard the whole thing yet, but from those two singles it sounds kinda... poppy? Could be interesting. Meanwhile, fans of the band's heavier stuff, like 1998's classic The Shape of Punk to Come should be treated to many favorites tonight. They've been playing a lot of that one on tour. Make sure to get there early for Philly shoegazers Creepoid.

Hutch and Kathy, Brian Bonz @ Mercury Lounge
Before they got louder in The Thermals, Hutch Harris and Kathy Foster made folky pop as Hutch and Kathy. Their 2002 eponymous album got its first-ever vinyl pressingforRecord Store Day 2015 and they're celebrating with a short tour.

Holly Herndon, GABI, Evan Caminiti @ The Wick
Holly Herndon's new album, Platform (her first for 4AD), is art pop in the truest sense of the word. She brings together a lot of very out-there sounds, yet it's strangely accessible from start to finish. Opening is the similarly-minded GABI, and Evan Caminiti of experimental duo Barn Owl.

Iron Reagan, Angel Du$t, Noisem @ Saint Vitus Bar
Two bands that do a lot of justice to '80s crossover thrash, Iron Reagan and Noisem, meet up at Saint Vitus tonight. Iron Reagan bring a sense of humor, while Noisem's approach is a little more personal and serious. The youth crew-inspired Angel Du$t round out the bill.

The Felice Brothers, The Barr Brothers @ Red Hook Park
This free show, part of SummerStage, features two acts who gently push the barriers of folk in new directions. Doors are at 6:30 PM and the concert's over at 9 PM.

Tyondai Braxton @ The Kitchen
Originally performed at the Guggenheim in 2013, Braxton's Hive1 is "part architectural installation and part ensemble performance with five musicians sitting cross-legged atop their own space-age oval pods."

Dead Stars, Charly Bliss, Dances, Jangula @ Alphaville
Dead Stars are celebrating the release of their new single "Calm Punk" tonight. You can stream that song, which roars in a poppy '90s indie rock kind of way, below.

Big Eyes, Josh Berwanger Band, Flashlights, Desert Sharks @ Shea Stadium
Big Eyes make raw, melodic punk with a bit of a Muffs influence, but they're a lot heavier than a lot of bands who fit that description. Josh Berwanger, former co-lead singer of emo vets The Anniversary, makes this an excellent double bill.

Aloke, Big Ups @ Baby's All Right
If you don't remember Aloke, they were the mid 2000s NYC rock band of Christian Zucconi, who since got much more famous with his band Grouplove (whose early single "Colours" was a reworking of an Aloke song). Aloke returned with a new Steve Albini-produced 3-song EP last month, and tonight they play Baby's with a newer NYC rock band, Big Ups.