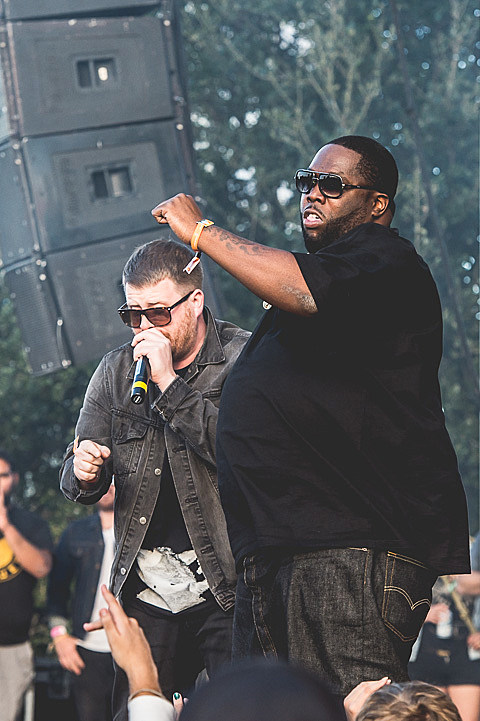 Run The Jewels, Vince Staples, Sleigh Bells @ 50 Kent (NORTHSIDE)
After long-running and consistently great separate careers, El-P and Killer Mike joined forces and deservedly catapulted themselves further into the public eye than ever before. Making this show even better is rising rap star of the moment Vince Staples, and loud pop duo Sleigh Bells.

Girlschool, Crucified Barbara, Old James, Velvet Black @ Saint Vitus
The UK's Girlschool have long been associated with Motorhead, and like that band they've been churning out hard rock for decades. Their newest album is due this summer, 35 years after their debut, Demolition.

Viet Cong, SannhetGirl Band @ Music Hall of Williamsburg (NORTHSIDE)
While there are definite echoes of Gang of Four, Wire, Neu!, Joy Division and other postpunk/kraut influences, Viet Cong don't really sound like any of them. It's a weird, complex blend of those things, put through a kaleidoscopic lens filter that's best experienced live. This is their second of two Northside shows with intense Irish group Girl Band and tonight's show is extra great, because Brooklyn post-metal trio Sannhet round out the bill.

Bad Religion, Plague Vendor, Lost In Society @ Starland Ballroom
Bad Religion just wrapped up a sold-out run of four wild NYC shows (at least the one we caught was), and before leaving the area they'll play a larger venue in the nearby Sayreville, NJ.

Ne-Yo, Ludacris, Cash Cash @ Barclays Center
With so many great Northside shows happening, a big mainstream R&B/rap show might not be your choice destination tonight, but if it is, there's no denying that Ne-Yo and Ludacris both have their fair share of bangers.

Alvvays @ The Surf Lodge
If you're out in Montauk today, going to see charming Canadian guitar pop band Alvvays is probably a good option.