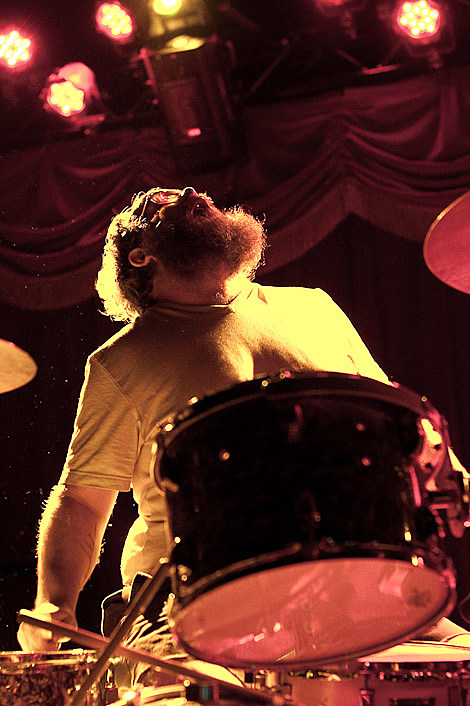 Pattern is Movement, Ava Luna, SHRAF @ Baby's All Right
With odd harmonies and time signatures and unconventional configurarion, Philadelphia's Pattern is Movement are one-of-a-kinds. And after tonight's show, sadly, they'll be no more. Go say goodbye tonight (and the openers are good too).

KEN mode, Pyrrhon, Fight Amp, Couch Slut @ Saint Vitus
KEN mode ditched their more metallic past on their new Steve Albini-recorded album for a post-hardcore/noise rock sound similar to some of the stuff Albini was recording in the late '80s/early '90s. Their tourmates Fight Amp also have a new post-hardcore album out, but more on the sludgy punk side. Pyrrhon celebrate their spastic new EP, Grown Without End, at this show. And locals Couch Slut have nothing new to support, but they're not to miss either. Great bill all around.

Shamir, Soft Lit @ Music Hall of Williamsburg
Shamir's debut album, Ratchet (which he made at Silent Barn), is likeable dance pop not too far from Hot Chip's universe. Tonight's sold-out show is his biggest in NYC yet.

Ginger Baker feat. Pee Wee Ellis, Alec Dankworth & Abass Dodoo @ BB King's
Thanks to his time in Cream, drummer Ginger Baker is pretty much a legend for life, but he's also been doing interesting stuff much more recently like releasing the album Why? and the documentary that he's subject of, Beware of Mr. Baker. This is night 2 of 2.

The Helio Sequence, Lost Lander @ Mercury Lounge
The Helio Sequence put their new self-titled album out on Sub Pop earlier this year, and it adds a lightly psychedelic touch to their sound. It's good stuff, and you can hear those songs performed live tonight. This is their second of two NYC shows this week.

Bigwig, Make War, Slow Children, Up for Nothing @ Grand Victory
NJ punks Bigwig played their home state earlier this year, but they haven't played NYC in ten years. That changes tonight, before they head to Canada for this weekend's Amnesia Rockfest.

Oberhofer @ Neuhouse
Brad Oberhofer will release his new album, Chronovisions, in August and you can hear some of it tonight at this intimate show.

Filed Under: Oberhofer
Categories: Music News, What's Going on Tonight in NYC
Comments
Leave A Comment
Back To Top