photo: Superheaven @ Studio at Webster Hall in May (more by Mimi Hong) 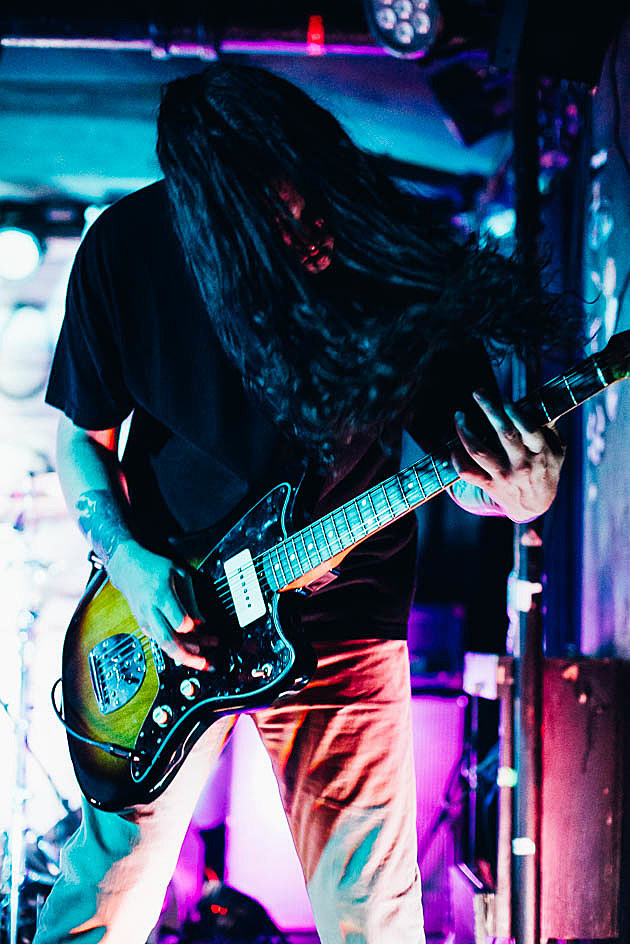 Superheaven, Diamond Youth, Rozwell Kid @ Amityville Music Hall
Superheaven offer one of the most convincing takes on '90s grunge (even if they hate being called that) of most modern bands doing that kind of thing, and Diamond Youth seem to worship at the house that Josh Homme built (they're good at it too). Openers Rozwell Kid have kind of a rock star Weezer Green Album thing going on. This BV-presented tour already hit NYC, and tonight it's nearby on Long Island.

Uknown Mortal Orchestra @ Baby's All Right
After Warsaw, UMO is heading south to play a 1 AM show at Baby's All Right. To get in you need to comment on their Facebook page.

Van Morrison, Taj Mahal @ Forest Hills Stadium
Jazz-pop/folk rock legend Van Morrison released an album of duets this year but expect this show to touch on the many facets of his long, varied career. And for "Gloria" to be the encore.

Decline of Western Civilization @ BAM / Afterparty @ Rough Trade
Long out of print, Penelope Spheeris' Decline of Western Civilization documentary trilogy is finally coming out on DVD. There's a screening of the first film (the punk one) at BAM followed by a Q&A with Spheeris. After that you can head to Rough Trade to see an all-star band perform X's Los Angeles in full, and Citizen Blast Kane peform Black Flag and Circle Jerks covers. It's free with your BAM ticket; $7 without.

Future Punx, Eaters, Nuraxi @ Alphaville
Old pals Future Punx and Eaters team up again for this show at Alphaville, should be fun.

Charles Bissel (of The Wrens), Palomar, The Big Bright, White Collar Crime, Emmanuel May Pazavekmi @ Union Hall
Is this new Wrens album ever going to come out? Grill frontman Charles Bissel tonight at this benefit for Windsor Terrace's PS154.

Kids In the Hall @ Town Hall
Forty-three Helens agree: Kids in the Hall remain some of the funniest guys on the planet and this show -- a mix of new material and classic characters -- should be a lot of fun.

Palm, Dogs on Acid, White Pisces, Littlefoot @ David Blaine's The Steakhouse
Dogs On Acid include members of emo revival OGs Algernon Cadwallader and Snowing, and White Pisces have members of pre-Snowing band Street Smart Cyclist, but with these projects the bands offer up '90s-style grunge and indie rock. DBTS is a pretty cozy space, making it a great environment for this kind of stuff.

Total Babes, The Glazzies @ Rough Trade
If you like classic-style '90s indie rock (think Sebadoh or Wedding Present), Total Babes do it very well, with lots of punky energy and sneery attitude. As you may know, the band includes Jayson Gerycz of Cloud Nothings.

A Great Big Pile Of Leaves, Gates, Prawn @ Music Hall of Williamsburg
Summer-y emo revival band A Great Big Pile of Leaves are celebrating the 5th anniversary of their 2010 debut, Have You Seen My Prefrontal Cortex?, by playing it in full at this show. Gates and AGBPOL's likeminded Topshelf labelmates Prawn open the show.

Love As Laughter @ HiFi
Sam Jayne has fronted various incarnations of indie rock band Love As Laughter for 20 years, moving the band from the Pacific Northwest to Brooklyn. Recent single "LZY SLDR" finds them still in catchy top form. This is a free show.

Ovlov (farewell show), Bluffing, Hellrazor, Spook The Herd, Very Fresh @ Shea Stadium
Exploding In Sound band Ovlov are calling it quits after this show, and they're going out with a pretty cool bill. Hellrazor is the band of Speedy Ortiz drummer Mike Falcone, and Spook The Herd is the band of Grass Is Green's Jesse Weiss, and it also includes a couple Ovlov members.

Against Me!, frnkiero andthe cellabration, Annie Girl and The Flight @ Starland Ballroom
Against Me! already played a free NYC show on this tour, but if you missed it or need to see their killer live show again, you can head to NJ tonight and do just that.