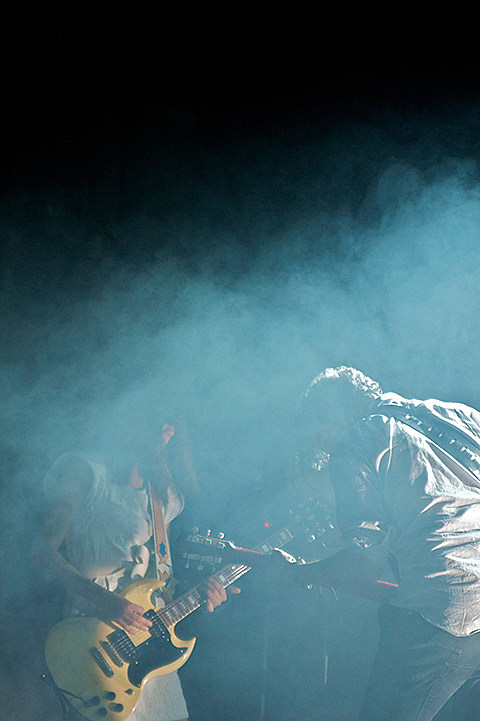 Blonde Redhead, Caveman, Talk in Tongues @ Webster Hall
Indie vets Blonde Redhead have made dream pop, noise rock, electronic pop, and more in their 20+ year career, and they continue to be great, both in the studio and on stage. Tonight's their second of two hometown NYC shows on their current tour.

No Joy, EZTV, Advaeta @ Baby's All Right
No Joy's new album, More Faithful, is a great example of the possibilities still open within the shoegaze genre, making for an extremely satisfying listen. Live, they still turn things up to tinnitus-levels. Bring earplugs to this record release show.

Leon Bridges @ Bowery Ballroom
Looking and sounding like he was transported straight from 1961, Leon Bridges has made a helluva "classic" R&B style record with Coming Home, his debut album.

Azealia Banks @ The Westway
After a long delay, Azealia Banks finally put out her debut album last year and it was well worth the wait. Tonight she plays this late show at The Westway, which is part of their weekly Westgay party and also an unofficial Pride Week event.

Highs, Ayer, Chaos Chaos, Frances Rose, Summer Heart @ Pianos
Göteborg, Sweden's David Alexander has been releasing records as Summer Heart since 2009 and he's got an airy, melodic style that isn't too far away from fellow Swedes The Radio Department or The Legends.

Toys That Kill, Shellshag, Benny the Jet Rodriguez, Nato Cole & the Blue Diamond Band, Hatrabbits @ Acheron
Toys That Kill is one of the many projects of melodic punk great Todd Congelliere (who's also in Underground Railroad to Candyland, who have a new album this year), and they're currently, and Todd also sometimes plays in Benny the Jet Rodriguez who TTK are currently touring with. Locals Shellshag are always worth catching too.

Everclear, Toadies, Fuel, American Hi-Fi @ Irving Plaza
Toadies have been up to some cool stuff lately, and while we can't exactly say the same about the rest of the lineup, at least this isn't the worst '90s nostalgia show of the year.

Colleen, Katya Mihailova @ Subculture
French multi-instrumentalist Cecile Schott, aka Colleen, released the excellent art pop album, Captain of None, this year on Thrill Jockey. Tonight she brings her first US tour in eight years to NYC.

Jim Adkins (of Jimmy Eat World), Small Time @ The Space
While Jimmy Eat World's later stuff hasn't been so hot, there's no denying they've got a few essential records of '90s/early '00s emo. Frontman Jim Adkins is currently on a solo tour, and it doesn't hit NYC but if you have a car this show's not too far.