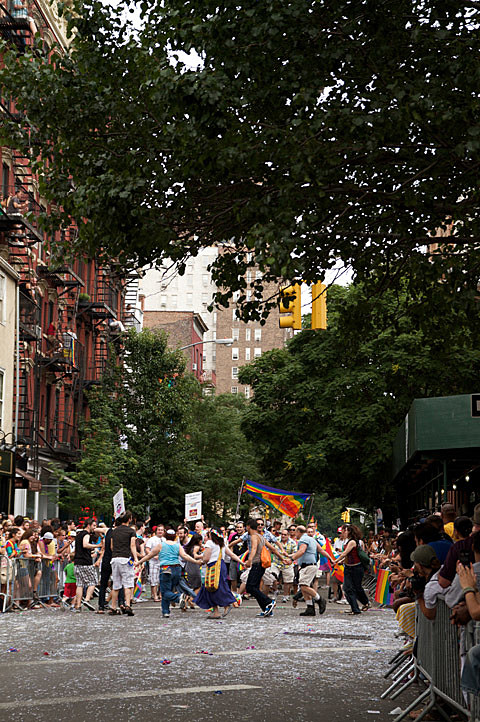 NYC Pride March & Dance on the Pier
With Friday's historic Same Sex Marriage ruling, Pride levels are at an all-time high. Expect massive crowds at today's March and Dance on the Pier finale.

They Might Be Giants @ Music Hall of Williamsburg (2 matinees)
TMBG's whimsically odd sense of humor was a natural match for kids and when they finally got around to making actual childrens' records, it was an instant hit. They'll be playing two family-friendly sets today at 12:30 PM and 3:30 PM.

Broken Water, Katrina Stonehart, Mami @ Elvis Guesthouse
Olympia, WA's Broken Water seem caught between two worlds, though both could've existed in 1993. They have a fuzzy, pop side, as well as an aggressive, grungy punk side. They seem to like the dichotomy, and both sides can be heard on their new album,Wrought.

Porches, Frankie Cosmos @ Storm King Art Center
Storm King's not very far from NYC, and it's a gorgeous place to spend a weekend afternoon out of the city, even when there isn't live music. But today there is: related bands Porches and Frankie Cosmos. Shows are free with admission into the park.

D'Angelo, Meg Mac @ Starland Ballroom
Neo-soul great D'Angelo may take a very long time releasing albums, but it's always worth the wait because the three that he has are masterpieces. That includes 2014's Black Messiah.

Wolvserpent, Fell Voices, Svart Crown, Mutilation Rites @ Saint Vitus
It's the third and last night of the three-night Stardust festival at Saint Vitus, which brings a handful of diverse and awesome metal bands together for the weekend.

Foxy Brown, Juliana Huxtable, Joey LaBeija, Cazwell @ The Westway
It's another installment of The Westway's 'Westgay' party, this time with Brooklyn hip hop vet Foxy Brown who has records dating back to the '90s as a solo artist and a member of Nas' group The Firm.

Justin Vivian Bond: Swallow My Pride @ Joe's Pub
A regular in NYC's drag scene for years, and once a member of the duo Kiki and Herb (with Kenny Mellman, who is now in The Julie Ruin), Justin Vivian Bond wraps up a 2-night stand at Joe's Pub tonight.