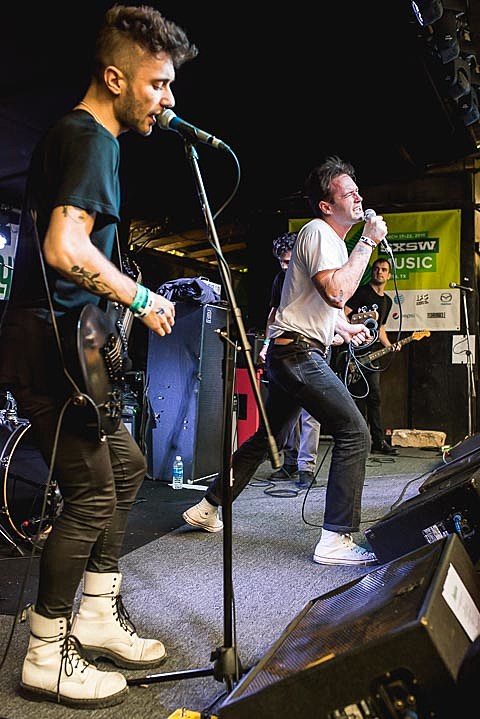 Ceremony, Pity Sex, Tony Molina, Uniform @ Bowery Ballroom
Ceremony have experimented with a lot of different styles since their powerviolence roots, and their newest album has them sounding more than a little like Joy Division. It's a good bill all around tonight, with shoegazers Pity Sex, Weezer/Thin Lizzy worshipper Tony Molina, and noise/hardcore duo Uniform. This lineup (with Wildhoney instead of Uniform) does it again tomorrow at the smaller/sweatier Shea Stadium too.

Basement Jaxx, Masters At Work, The Internet, Fei-Fei @ Central Park SummerStage
Long known as one of the best live dance acts around, UK duo Basement Jaxx should have SummerStage bouncing with hits like "Red Alert," "Romeo," "Where's Your Head At?" and "Oh My Gosh."

Brian Wilson, Rodriguez @ PNC Bank Arts Center
Pop legend Brian Wilson released a new solo album this year, and he's been playing some of that on this tour, but the majority of the 30+ song setlists have been Beach Boys favorites from "Little Deuce Coupe" to "Heroes and Villains" to "Sail On, Sailor." His band includes fellow Beach Boys Al Jardine and Blondie Chaplin. Making for a great double bill, storied folk singer Rodriguez opens.

Will Butler, July Talk, Walrus @ The Well
Arcade Fire's Will Butler released a solo album this year, and if you're a fan of his main band, you may dig some of this too. Today's show is a free 'Canada D'eh' show with an all-Canadian lineup, Canadian breakfast, Canadian whiskey, and Canadian craft beer. Doors are at noon and the music starts at 5 PM.

Bilal, DJ Adrian Younge @ Highline Ballroom
Philly neo-soul singer Bilal may not be as massive as Kendrick Lamar right now, but they worked on each others' new albums, so if you're a fan of TPAB you might like Bilal's new In Another Life too. Adrian Younge, who produced the album, is DJing tonight.

PINS, Beverly @ Mercury Lounge
Manchester quartet PINS released their second album, Wild Nights, this week via Bella Union and it's a marked step up from their debut. If there's a little less sneer and snarl this time, it's in exchange for better songs and smoky, brooding atmosphere. They are well-matched tonight with Brooklyn's Beverly.

Chumped, Hiccup, Emilyn Brodsky, Early Riser @ Palisades
If you dig pop punk that avoids overproduction and is closer to Superchunk than whatever was on TRL in 2002, Chumped and Hiccup (members of The Unlovables, The Chris Gethard Show house band) will both be right up your alley.

Key!, B.I.C., special guests @ Santos Party House
Atlanta rapper Key! was once a member of Two-9 but has since gone solo and collaborated with Chief Keef, iLoveMakonnen, and others. Tonight's show is with the very fun Bronx crew B.I.C. (Bitches Is Crazy), who opened for Two-9 in NYC on Sunday. Special guests are promised too. Hmm...

Crying, Adult Mom, Greg McKillop, T-Rextasy @ Silent Barn
This is a pretty cool local bill, with Crying who went from a chiptune band to one inspired a bit more by Rush, and the Tiny Engines-signed Adult Mom who's not too far removed from The Moldy Peaches.