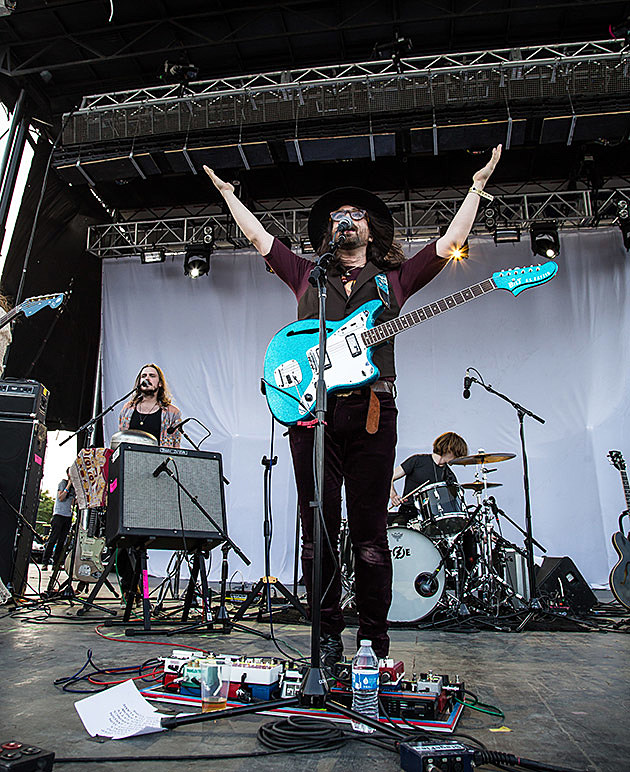 The Weather Station, Andy Shauf @ Mercury Lounge
Toronto artist Tamara Lindeman made her new album as The Weather Station at a French mansion along the Seine. That bucolic setting resulted in a gorgeous, pastoral record (she's getting lots of Joni Mitchell comparisons).

Eszter Balint @ Joe's Pub
You may know her as John Lurie's Hungarian cousin in Jim Jarmusch's Stranger Than Paradise, or Louis CK's neighbor/love interest in season 4 of Louie, but Eszter Balint is also a talented musician who just released her third album, Airless Midnight, which features contributions from Marc Ribot, Dave Schramm, Sam Phillips and others. You can stream it below and tonight's the album release show.

Ghost of a Saber Tooth Tiger, Workman Song & The Highway @ Brooklyn Bowl
Sean Lennon has made experimental, forward-thinking music in his career, but with GOASTT, he fully indulges in the family business of pop that is, for lack of a better word, Beatlesque.

Wet Hot American Summer, Big Ups @ McCarren Park (Summerscreen)
With the new Netflix prequel miniseries premiering later this month, it's time to catch up with the staff at Camp Firewood. Big Ups are now providing the pre-screening music instead of Regal Degal.

Mighty Mighty Bosstones, Street Dogs, The Interrupters @ Webster Hall
The Bosstones have been churning out their raspy-voiced ska punk since the '80s, and they're still going strong. (Their most recent album was 2011's The Magic of Youth.) Today they hit NYC with another Boston band, Street Dogs (the band of former Dropkick Murphys singer Mike McColgan) and Tim Armstrong affiliates The Interrupters.

Foo Fighters, Royal Blood @ Citi Field
Dave Grohl only let his broken leg stop him for a few shows, but he and the Foos are back on the road and tonight's their first of two shows at baseball stadium Citi Field.

Jaill, Air Waves, Scully, Spritzer @ Shea Stadium
Milwaukee's Jaill made their first album in three years, finding themselves on a new label (Burger instead of Sub Pop) but with their hooky sound and sense of humor intact. Tonight's a good show all-around, with opening sets from the gentle Air Waves and scrappy garage of Scully.

George Clinton & Parliament Funkadelic @ Queensbridge Park
The sound of R&B and hip hop would be very different today without George Clinton and P-Funk's pioneering, out-there sounds. He still pilots the mothership with skill and grooves. This is a free Summerstage show.

Har Mar Superstar, Danny Fingers and The Thumbs, JM Airis, Ruby Stinson @ Bowery Electric
A fearless and funny performer, Har Mar Superstar brings the party -- and his R&B/rock/pop songs -- to wherever he plays.

Hall & Oates @ Nikon at Jones Beach
With a long, long list well-known tunes -- including Number One smashes "Rich Girl", "Kiss on My List", "Private Eyes", "I Can't Go for That (No Can Do)", "Maneater", and "Out of Touch" -- it should be a danceable hit parade all night long.

Roosevelt, Rush Midnight @ Baby's All Right
German electronic singer/songwriter/producer Roosevelt picked up some buzz last year for his catchy debut EP, Elliot. He was supposed to play NYC soon after its release, but visa issues got in the way. Now he finally makes his way here for his NYC debut tonight.

'Gainsbourg: A Heroic Life' screening, Ginkgoa @ Socrates Sculpture Garden
Bastille Day was yesterday, but if you are looking to continue celebrating en français, go catch Joann Sfar's untraditional biopic on French pop legend Serge Gainsbourg. He tries to squeeze in too much of Gainsbourg's colorful, wild life, but it's worth seeing. Before the screening Parisian singer Ginkgoa performs. Free, doors at 6:30 PM.