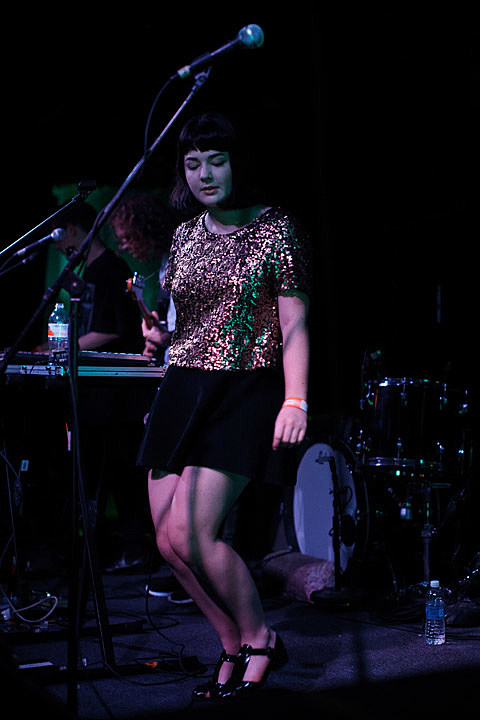 Government Issue, Blockhead, Agitator, Lakras @ Acheron
DC hardcore legends Government Issue have been reunited since 2010, but they've yet to play NYC in that time. Now they finally will, and you can likely expect a lot of 1981's classic Legless Bull. Their current lineup is John Stabb (vocals), John Barry (guitar), Dwayne Bruner (bass), and Karl Hill (drums).

Blondes, Teengirl Fantasy, Heretic, Tronik Youth, JDH & Dave P, Facets @ Good Room
There really are a ton of options for tonight if you like to go out and dance. Here's another -- a release party for local duo Blondes' new Persuasian EP on RVNG Intl.

Horse Meat Disco, Justin Strauss, Danny Krivit, Tad Haes @ Output
This London-based four-man DJ collective are known for finding pearls in bins of forgotten disco 12", having released a series of acclaimed compilations. Their real expertise comes into play at their DJ gigs, though. Just trust their taste...and the beat.

U2 @ Madison Square Garden
It begins, the first of eight U2 shows at Madison Square Garden. Word from earlier stops on the "Innocence + Experience" tour say that U2 have created a stadium spectacle like never seen before -- which is just what you'd expect for these ticket prices.

Ronnie Stone and The Lonely Riders @ Aviv
How serious you take Ronnie Stone & the Lonely Riders is up to you but his intentionally kitschy, '80s-in-a-blender shtick (somewhere between Bruce Springsteen and Prefab Sprout) is not without craft, even if it is a big joke.

Stranger Cat, Loving You, The Creators Collective @ Music Hall of Williamsburg
Stranger Cat, the electronic art pop duo of Cat Martino and Sven Britt, released their debut album earlier this year, which featured a collaboration with Sufjan Stevens. Tonight they play at this show, which will be screening Strange Bedfellows.

Baked, Two Inch Astronaut, Stove, Wing Dam, Palm @ Shea Stadium
If you'd like a night of '90s-style indie rock and post-hardcore, many of the bands on this bill will scratch that itch.

Kacey Musgraves, Andrew Combs @ The Paramount
Kacey Musgraves has been getting a lot of acclaim outside of the country world lately, and it's well deserved. This year's Pagent Material is a good record. If you're going tonight, it's just as worth catching Andrew Combs, who's also country but has a big Paul Simon influence too.

Karma to Burn @ Black Bear Bar
Karma to Burn have been making instrumental stoner rock since the late '90s. They broke up for a bit, but reunited back in 2009 and have released three records since then, making their current run as prolific as their original one.

Electric Citizen, Mondo Drag, Slow Season, Blackout @ Saint Vitus
These are all newer bands, but they all do justice to '70s-style hard rock and proto-metal. Good bill all around.

Failure @ The Space at Westbury
Alt-rock/space rock band Failure recently released The Heart Is a Monster, their first album since 1996. They're back in fine form, as tonight's show will surely prove.

Hot Tuna, New Riders of the Purple Sage @ Capitol Theatre
The San Francisco Sound is in the air this year, with 50th anniversary celebrations from both The Grateful Dead and Jefferson Airplane. Both of those bands' spirits will be in the house tonight, with JA spinoff Hot Tuna and the Dead's old pals, the New Riders.

R. Kelly, Floetry @ Prudential Center
British neo-soul/hip hop duo Floetry broke up after their 2005 sophomore album, Flo'Ology, and Marsha Ambrosius and Natalie Stewart (aka The Floacist) embarked on separate solo careers. Now they're back in action, and on a reunion tour which hits the NYC-area three times. This is the first, and it's opening for R. Kelly.