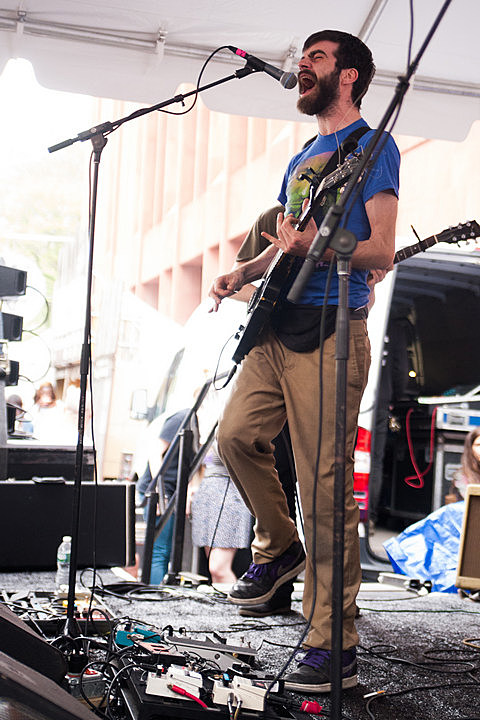 Creepoid, Marriages, Geoff Rickly, DJ Nicky Palermo (of Nothing) @ Music Hall of Williamsburg
This bill is pretty excellent all around. There's the shoegaze of Creepoid, the gothy post-rock of Marriages, who are led by powerhouse vocalist Emma Ruth Rundle, and a solo acoustic set from Thursday/United Nations/No Devotion frontman Geoff Rickly (who also runs the label Creepoid and Nothing are on).

Jason Isbell, Dawn Landes @ Prospect Park
Jason Isbell just released his fifth solo album, Something More Than Free, and if you've been keeping up with his solo career it shouldn't surprise you that the songwriting on it is quality stuff. This show is free, and Dawn Landes makes it a great double bill.

Planning for Burial, Iron Gag, Prostitution, Somnuri @ Grand Victory
For fans of truly dark music, last year didn't get much better than Planning for Burial's Desideratum on The Flenser. More recently he put out a split with Mother Room.

Nicki Minaj, Meek Mill, Rae Sremmurd, Tinashe, Dej Loaf @ PNC Bank Arts Center
If the idea of a big mainstream rap/R&B show in a huge venue turns you off, that's understandable but this bill is actually pretty great all around. Nicki's touring in support of her best album yet, and Meek just dropped a new quality LP of his own last month. Rae Sremmurd have two of the most unstoppable rap hits in recent memory, and the same can be said for Tinashe for R&B. Dej Loaf is showing a lot of promise too.

Mr. Twin Sister, Moon King @ Bowery Ballroom
We're still not sure why they added the title to their name but there's no denying the lushly orchestrated dance music on Mr. Twin Sister's debut album that evokes mid-'90s Bjork and Everything But the Girl. If you're going tonight, do get their early for Toronto's Moon King who make exciting, motorik, shoegazey pop.

Primus, Dinosaur Jr., Ghost of a Saber Tooth Tiger @ Stone Pony
It's a Lollapalooza '93 reunion with Primus and Dinosaur Jr -- what, no Front 242 or Fishbone? Instead, opening is Sean Lennon's The GOASTT.

Rocky Votolato, Dave Hause, Chris Farren @ Mercury Lounge
Three singer/songwriters with punk roots (using the term loosely) team up for this show. Rocky recently released a full-band album on No Sleep, and he's touring with a full band too. Chris just put out a collaborative album with Jeff Rosenstock as Antarctigo Vespucci this week. Dave doesn't have anything new out, but does have plenty of material to pull from.

Iron Chic, Beach Slang, Broadcaster, Scout Boys @ Amityville Music Hall
Beach Slang will be in NYC for Gigawatts Fest this Sunday, but ahead of that they're just outside of the city for this Long Island show. Making this one extra appealing are the very good LI bands Iron Chic and Broadcaster.

Pure Disgust, Barge, Depths of Reality, NYC Headhunters, Concealed Blade @ Palisades
Earlier this year, DC hardcore band Pure Disgust released the Chained EP on Katorga Works. Like a lot of that label's recent releases, it's raw and dirty but catchy too. Stream it below.

Tokimonsta, Gavin Turek, Sofi Tukker @ Baby's All Right
Electronic dance musician Tokimonsta normally plays way bigger venues than Baby's All Right, so this show should be pretty nuts. Not surprisingly, it's sold out.

Your Old Droog, Chelsea Reject @ Baby's All Right
Your Old Droog hasn't totally escaped those Nas comparisons yet, but he does continue to gradually come into his own. Chelsea Reject is becoming a regular on Duck Down shows, and is also worth catching.

One Tail One Head, Sortilegia, Vanum, Hæthen, Eos, Vorde @ Saint Vitus
This is the second of the two-day Brooklyn metal festival Dissociative Visions.