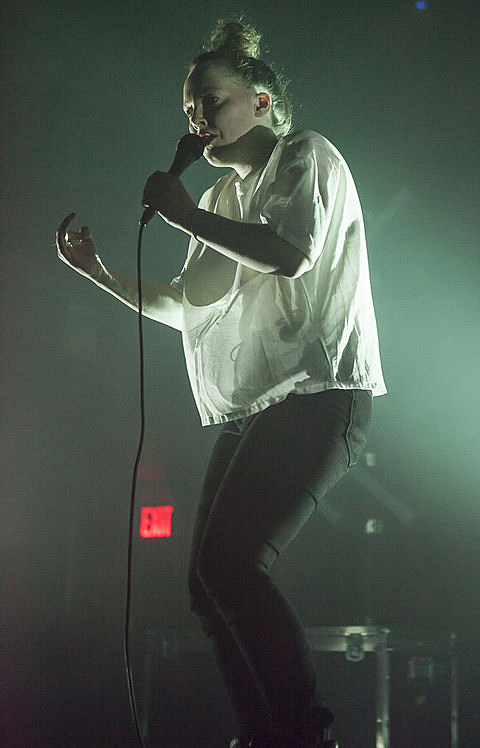 Sylvan Esso, Porches @ Prospect Park
Electro-pop duo Sylvan Esso bring a lot more charm and charisma than you might expect from a group that doesn't have a drummer. This is their biggest headlining show in NYC to date. Rising band Porches open. Free.

Kid Congo Powers & The Pink Monkey Birds, Degreaser, Art Gray Noizz Quintet @ Union Pool
Kid Congo Powers has played in The Gun Club, The Cramps and Nick Cave & the Bad Seeds, which is an impressive enough CV to just rest on your laurels, but he's still making cool new music. They headline today's free "Summer Thunder" show. This should be a good one. Starts at 2 PM.

Taso, Sicko Mobb, Ricky Eat Acid, Tripletrain @ Palisades
After Warm Up, keep the party going with Sicko Mobb, who head to Palisades for a late show.

Memory Tapes, Computer Magic, School Dance @ Baby's All Right
It's been a couple years since chillwave survivor Memory Tapes has released a new album. We got a couple new tracks earlier this year but to find out what might be next, catch him live tonight.

Woodsman, Tonstartssbandht, Jovontaes, Herbcraft @ Palisades
Brooklyn-via-Denver blissful droners Woodsman are about to start work on their fourth album that should be out in early 2016. Until then, catch them tonight as part of this experimental-leaning bill.

Aye Nako, In School, Vagabon, Palehound @ Silent Barn
This is a good bill all around of local-ish punk and indie rock, and it doubles as the release party for Aye Nako's new EP on Don Giovanni.

Beach Slang, Hurry @ Asbury Lanes
Beach Slang's album is finally done being recorded, and while we wait for it to come out, they're doing a long weekend of shows. Tomorrow they're in NYC, but this one's close by and with solid indie rockers Hurry.

The Flag, Courtship Ritual, GDFX, Parlor Walls @ Union Pool
Ted McGrath, formerly of Antimagic and These Are Powers, currently makes music under the name The Flag. His new album, Heat Waves, just came out and tonight's the release party. Check out the video for "To Wear the Vest of Wealth" below. Also worth catching are duo Courtship Ritual who make slinky, sultry post-punk.

Leon Bridges @ Surf Lodge
Texan Leon Bridges looks and sounds like he stepped out of 1962, and his take on vintage soul and R&B has become massively popular. If you're out in Montauk this weekend, here's a chance to see him at a venue smaller than he'll likely play any time soon. And it's free.