photo: Girlpool at MHOW in April (more by Amanda Hatfield) 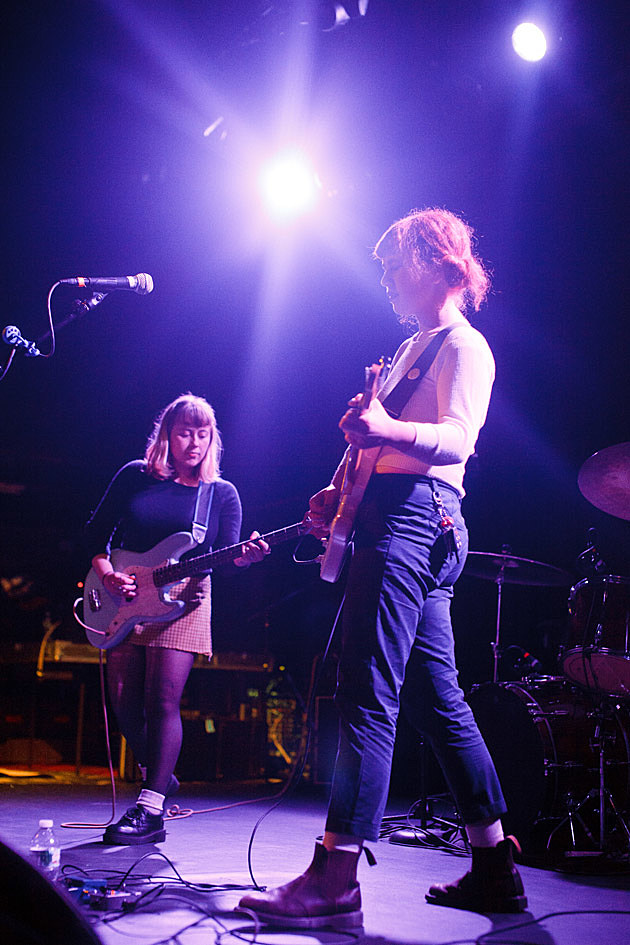 Girlpool, Florist @ Baby's All Right
Buzzy duo Girlpool put out their debut album this year, which has is up a similar alley to last year's EP: socially conscious lyrics sung in unison.

White Lung, The Men, Skepta, karaoke w/ Andrew W.K. @ The Gutter
This is a stacked show in a tiny venue with two great punk bands, White Lung and The Men, grime artist Skepta, and karaoke with the king of partying, Andrew WK. It's a Vice/Ray-Ban party that you had to RSVP for.

TV Girl, Novelty Daughter, Current Joys @ The Studio at Webster Halls
TV Girl released the highly-underrated French Exit last year which is a nice mix of indie pop, an early '90s/Daisy Age approach to sampling/beats, and a highly cynical lyrical view of relationships. Their live show is fun, too.

Users, Good Field, Reservations, David Moss @ Littlefield
Austin's Reservations began as a folky duo of Jana Horn and Paul Price, having released a self-titled EP in 2012. Since then they've added drummer Jason Baczynski and have just released their debut full-length, Taking Time. With a smoky/dusty sound, you can draw comparisons to Widowspeak or Sharon Van Etten, but Reservations are doing their own thing too. Good Field (which is fronted by Price) plays as well.

Lee Bannon, Tint @ Baby's All Right
After the Girlpool show, stick around Baby's for a set with hip hop producer Lee Bannon, who's worked with Joey Bada$$ and more. UPDATE: This show is cancelled.

Skepta @ Palisades
In addition to that Vice/Ray-Ban party, UK grime artist Skepta also plays his own show at Palisades tonight. Sold out.

Watkins Family Hour @ City Winery
Watkins Family Hour is something of a super collective, led by 2/3 of Nickel Creek and including a bunch of other members, the most famous one being Fiona Apple. They recently released their self-titled debut album, which entirely features covers (Grateful Dead, Bob Dylan, Fleetwood Mac, more). This is night 2 of 3 at City Winery, and this one includes special guests Mikaela Davis & Ashley Monroe.

Josephine Foster, Ed Askew Band, Colby Nathan @ Trans-Pecos
If you like late '60s/early '70s bare-bones folk, tonight's show is a tough one to pass up. Ed Askew was actually doing it back then and he continues to be great now, and Josephine Foster is a newer artist who does justice to that era.

Peter Frampton, Cheap Trick @ The Paramount
Two '70s acts whose most famous albums might be live ones (Frampton Comes Alive and Cheap Trick: Live at Budokan) know how to bring a crowd to their feet and keep them there. Just go easy with cellphone pics in front of Frampton, ok?

Boxed In, Future Punx @ Mercury Lounge
If you dig George FitzGerald's new album, you probably also dig Boxed In, who contributed a lot of the album's live vocals. Tonight's bill is good all around (if not a bit odd) with new wavers Future Punx opening (and playing their last NYC show till October).

Smashing Pumpkins, Marilyn Manson @ PNC Bank Arts Center
While Smashing Pumpkins' recent recorded output doesn't quite live up to their '90s material (last year's Monuments to an Elegy wasn't half bad though), this tour is especially worth seeing because original drummer Jimmy Chamberlin is back in the fold. Marilyn Manson co-headlines.

Dazed and Confused screening, Slothrust @ McCarren Park (Summerscreen)
Richard Linklater's ode to his late '70s youth starring a whole bunch of young actors, most of whom are now famous, shows at Summerscreen tonight. The screening is well matched with Slothrust who probably own the Dazed & Confused soundtrack. Free: doors at 6 PM, music shortly thereafter with the movie beginning at sundown.

Howling, Ame, Nikola Baytala @ Output
Howling is the duo of Berlin producer Frank Weidemann (aka Âme) and LA-via-Australia singer RY X (of The Acid). They make the kind of singer/songwriter electronic music that fans of The xx and James Blake will probably dig. Ame plays a solo set tonight too.