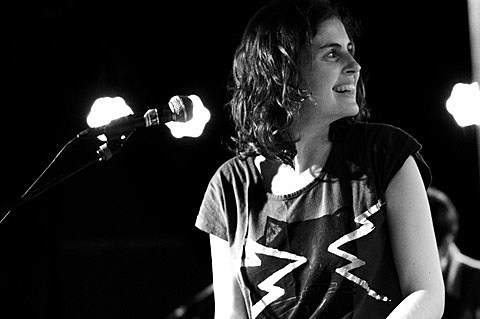 photo: Laetitia Sadier at Terminal 5 in 2011 (more by Vincent Cornelli) 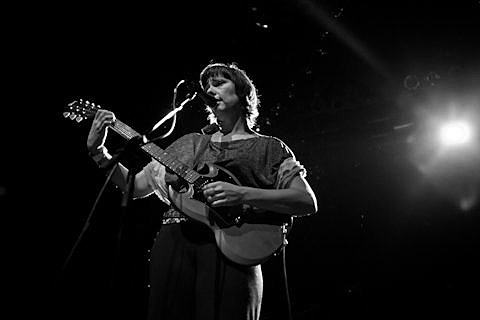 Thee Oh Sees, Zs, Purling Hiss @ Warsaw
Coming off their strongest album in a while, Mutilator Defeated at Last, Thee Oh Sees bring their new(ish) two drummer lineup to NYC for the final of three shows with Zs.

Laetitia Sadier (of Stereolab), Deradoorian, Operator @ Baby's All Right
Former Stereolab singer Laetitia Sadier hasn't strayed to far from her old band's sound on her solo albums, like last year's Something Shines. Making this bill all the more enticing is Deradoorian, Angel Deradoorian's new project with her sister, Arlene.

The Juan Maclean, Guerilla Toss @ Music Hall of Williamsburg
Fresh off a European tour, the Juan Maclean (featuring a hot four-piece lineup, including some rad theremin use) play their second of two NYC shows tonight which also has new DFA signing Guerilla Toss.

Micachu & The Shapes, Highlife @ Alphaville
Micachu's new record, Good Sad Happy Bad, was born out of an unrehearsed jam session that was secretly taped by drummer Marc Pell, and that became the backbone of the album. We are very curious to hear what this all sounds like live.

The Orb, Michna @ Bowery Ballroom
Dub chillout pioneers The Orb have been providing the soundtrack to some people's comedown for 25 years now. With a new album, Moonbuilding 2703 AD, under their belts, be ready for lift-off. This is their second of two shows.

Tomorrow's Tulips, Fletcher C. Johnson, Fern Mayo, Larry and The Babes @ Palisades
Costa Mesa, CA trio Tomorrows Tulips make lo-fi indiepop with a flower power bent, and have records out on the Burger Label (which is enough to get some people to this show).

John Hodgman @ The Bell House
John Hodgman, who seems to be on every decent comedy series on TV these days, is heading out on a tour called "Vacationland"  this weekend. Before he leaves, he's playing this warm-up show in Brooklyn.

Slingshot Dakota, Haybaby, Bethlehem Steel, Elizabeth Warren @ Shea Stadium
If you like poppy lo-fi indie with a kick, pretty much this whole bill will be up your alley.

Aeroplane, JDH & Dave P @ Output (The Roof)
Belgium dance producer Aeroplane is no stranger to FIXED parties, and he makes a welcome return to NYC for another of those tonight.