photo: Death Cab for Cutie in Chicago in 2014 (more by James Richards IV) 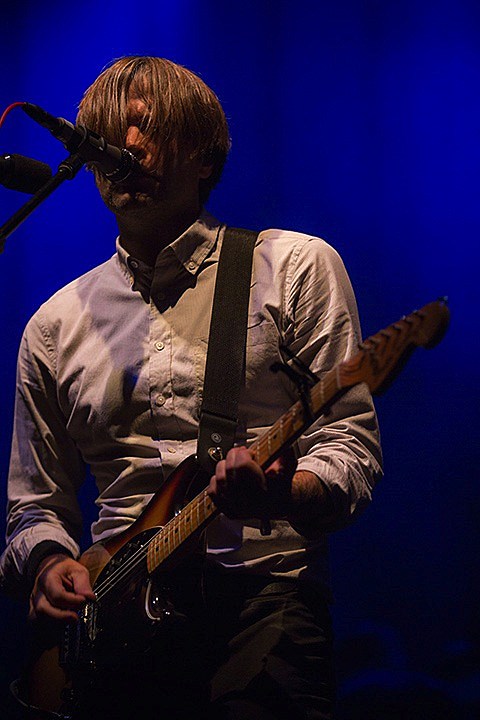 Craig Finn @ Rough Trade (2 PM)
There's always been a Springsteen vibe to The Hold Steady, but frontman Craig Finn dives further into The Boss's mid-'80s style than ever before on his new solo album, Faith In The Future. To get into this all ages matinee, you have to purchase the new album from the Rough Trade store today.

Moon Duo, Soldiers of Fortune, Squad Car @ Baby's All Right
Few bands today are as good as locking onto a groove and riding it all the way as Bay Area droners Moon Duo. (They call it "Repeat-o-Rock.") In town for two shows (this is the first), they play with NYC indie rock supergroup Soldiers of Fortune which includes members of Oneida, Chavez, Endless Boogie, Home and more.

Micachu & the Shapes, Blues Control @ Le Poisson Rouge
Micachu's new record, Good Sad Happy Bad, was born out of an unrehearsed jam session that was secretly taped by drummer Marc Pell, and that became the backbone of the album. We are very curious to hear what this all sounds like live."

Yonatan Gat, Innove Gnawa Band, Honduras, Alan Licht @ Rough Trade
Onetime Monotonix member Yonatan Gat smudges the line between performer and audience -- as long as you're prepared to be an active participant, his shows are a lot of fun. Having just made a record with Steve Albini, he plays this somewhat disparate bill.

Bushwig Fest @ Onderdonk House
Basically the new Wigstock, Bushwig is a celebration of drag culture and music happening at the historic (and surprisingly bucolic) Onderdonk House in Ridgewood. Today's performances include bottoms and Wigstock founder and downtown legend Lady Bunny.

Nuclear Assault, Murphy's Law, Whiplash @ Gramercy Theatre
NYC thrash veterans Nuclear Assault plan to retire in the near future (they're sticking it out at least until MDF 2016), and they're currently on their "final" tour. They're joined by fellow '80s-era NY/NJ metal/punk bands Murphy's Law and Whiplash tonight.

Scorpions, Queensryche @ Barclays Center
While Scorpions may be best remembered for their '80s pop metal hits, their history dates back much further than that to 1965, the year the band formed. They're currently on their 50th anniversary tour, which doubles as support for their brand new 18th album Return to Forever.

Captain We're Sinking, Petal, Original Sharks, Dizzy Bats, Portuguese Bend, Growing Stone @ Black Bear Bar
The band we're most excited about on this bill is Petal, which is led by Kiley Lotz but also sometimes includes members of Tigers Jaw, whose sound is a pretty good reference point for Petal's. Their punky Scranton neighbors Captain We're Sinking headline, and they're worth seeing too.

The Forms, Salt Cathedral, Tomboy, Nicholas Nicholas @ Riis Par Beach Bazaar
The Forms have been slowly churning out their post-hardcore/indie rock blend for over a decade now (often recorded by Steve Albini), and while they haven't put out anything new since 2011 it's always a treat to see them.

O'Death, Mail the Horse, Johnny Pinhook & the Tobacco-Aires @ The Shop
O'Death's latest album is 2014's Out of Hands We Go (on Northern Spy), a very dark and very raw folk album.

Flosstradamus @ La Marina
Get brunch and dance at today's 'Brunch Bounce' at La Marina Beach (348 Dyckman St) which starts at 2 PM and goes through 1 AM.

Gloria Gaynor @ BB King's
Disco's influence has been infiltrating modern pop and indie rock for a while now, and what would disco be without Gloria Gaynor? The "I Will Survive" singer returns to the stage in NYC tonight.

Back to School Jam @ GameChanger World (NJ)
One-day hardcore fest Back to School Jam is the first show in two years for headliners Trapped Under Ice, and it also features the metallic Code Orange, Incendiary, and more. It's now a benefit for Tom Alderson, who was allegedly beat by members of Heavy Chains and Suburban Scum (SS were going to play Back to School Jam but dropped).

Oddball Comedy Fest @ XFINITY Theatre (Hartford, CT)
The annual Oddball Comedy & Curiosity Festival puts some of the best comedians of the moment together for a huge tour, and tonight continues the NYC-area run. Aziz Ansari and Amy Schumer were both on the 2014 tour, but there's no denying their careers got major boosts in the past year, so it's exciting to see this time they're back as co-headliners. Today's the Hartford stop which is sort of an infamous stop of this tour. It's where Dave Chappelle walked off two years ago and then made a surprise appearance last year.