photo: Godflesh at Irving Plaza in 2014 (more by Greg Cristman) 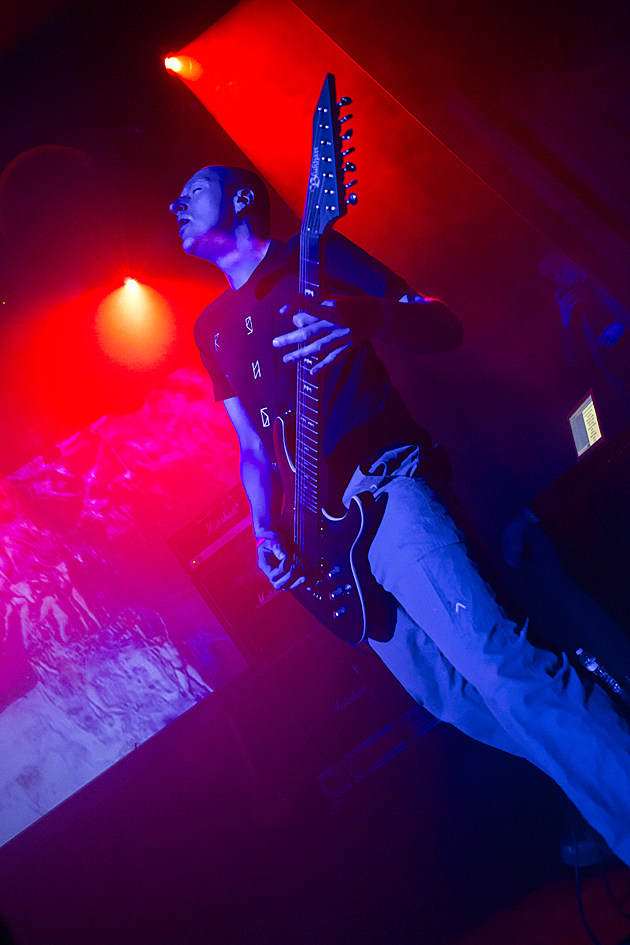 Godflesh, Prurient, Regis @ Warsaw
Godflesh returned last year with A World Lit Only By Fire, their first album since 2001 and one that expertly recalled their earliest releases such as 1989's timeless Streetcleaner. Prurient's having a great year too thanks to the great reception for his difficult, demanding Frozen Niagara Falls, and though he has nothing new out, electronic musician Regis is always consistently great too. Awesome bill all around.

Nick Diamonds, Small Feet @ Rough Trade
While we wish The Unicorns reunion lasted a little longer, Nick Diamonds' new solo album City of Quartz is the closest he's coming to sounding like that band since their initial breakup. It's a good double bill with Sweden's promising Small Feet, who are on Barsuk and have more than a little Neil Young influence.

Os Mutantes @ Le Poisson Rouge
Brazilian psychedelic legends Os Mutantes are still going some 50 years since forming and is sure to be a party.

Pampers, OBN IIIs, Honey, Rathaus @ Union Pool
This is a pretty killer bill of no-nonsense punk and rock, highlighted by the super-fun Thin Lizzy sounds of Austin's in-your-face OBN IIIs. Pampers art-damaged garagepunk is great too, as is the proto-punk sounds of Honey.

Diane Coffee, Whitewash, The Lemon Twigs @ Baby's All Right
Diane Coffee, aka Foxygen drummer Shaun Fleming, released his new album, Everybody’'s A Good Dog, earlier this month and it takes aim at 1973, squashing Bowie, Elton John, The Stones, Todd Rundgren and a giant bag of glitter into his theatrical worldview. If you're going to this show, make a point to get there early to see Long Island's The Lemon Twigs who are a) still in high school, b) jaw-droppingly accomplished and c) somehow sound like 10cc.

Mild High Club, Laser Background, Savants @ Silent Barn
You might know LA musician Alexander Brettin from his time in Salvia Plath (fka Run DMT) or his contributions to Ariel Pink's Pom Pom. He also makes music on his own asMild High Club which isn't too far away from the hazy, waterlogged psych-pop sounds of Ariel Pink, Connan Mockasin or Part Time.

Emmylou Harris & Rodney Crowell @ Beacon Theater
Country veteran Emmylou Harris has been going strong since the '60s, and in the past two years she released two collaborative albums with Rodney Crowell, including this year's The Traveling Kind on Nonesuch.

Wayne McGregor, Olafur Eliasson, Jamie xx @ Park Avenue Armory
Choreographer Wayne McGregor and visual artist Olafur Eliasson have a new ballet called Tree of Codes and the music for it was done by Jamie xx, who's having an incredible year thanks to his very well-received new album In Colour. The ballet runs from September 14-21.

Seth Herzog's SWEET @ The Slipper Room
SWEET just celebrated its 11th anniversary last night with a big show at Webster Hall, and it's back to business as usual at The Slipper Room. No rest for the funny.

Corn Mo @ Rockwood Music Hall
Playing a one-of-a-kind mix of glam, circus music, '70s singer-songwriter, Jim Steinman-style bombast and anything else he can cram in there, Brooklyn's own Corn Mo is like no other.