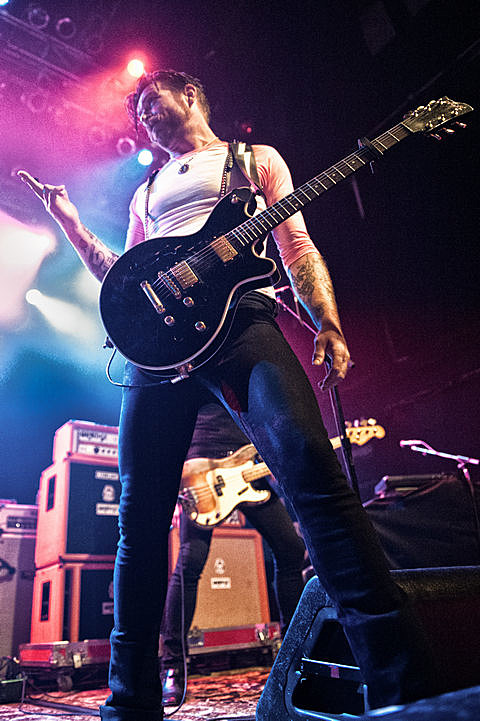 Babes in Toyland, Fea @ Irving Plaza
Babes In Toyland are in the midst of a successful reunion, and while bassist Maureen Herman was removed from the band mid-tour, they're still bringing all the fire and noise that they had in the original grunge era. BrooklynVegan proudly presents this show.

Rancid, H2O, The Interrupters @ Terminal 5
Punk and sometimes-ska institution Rancid never really put out a bad album, but their third LP ...And Out Come the Wolves was when it really all came together better than ever before or after. That album turned 20 this year and they've played it in full at a few festivals. It's not 100% clear if that's what they're doing tonight, but it at least seems likely that we'll hear a lot of it. New York vets H2O and new-ish ska-punk band The Interrupters (whose album Tim Armstrong had a hand in) open, and all three bands do it again tomorrow too. Both sold out.

Robert Plant and the Sensational Space Shifters @ The Capitol Theatre
Robert Plant still has all the charisma and (most of) the vocal strength that made him a star four decades ago, and his current band (featuring members of Massive Attack and Portishead) help keep his music sounding modern. Their new stuff is pretty great, and of course you'll hear some Zeppelin tonight too. They do it again tomorrow at Hammerstein Ballroom.

Chad Valley, Lemonade, Yumi Zouma, Korallreven, Cuushe, Erika Spring (DJ), Jensen Sportag (DJ), and Maria Usbeck (DJ) @ Wythe Hotel
It's Cascine Records' fifth anniversary and they're celebrating on the roof of the Wythe Hotel, including live performances and DJ sets from most of their roster, including the second-to-last-ever Korallreven show. Sold out.

Eagles of Death Metal @ Saint Vitus
Eagles of Death Metal is the garage party rock band led by Jesse Hughes and QOTSA's Josh Homme (though Josh rarely plays live with them), and this year they're returning with their first album since 2008, Zipper Down. They're on tour ahead of that, and this is the second of two sold-out NYC shows.

The Star Spangles, PMS & the Moodswings, Vylits, DJ Jonathan Toubin @ Union Pool
It's the first show in eight years from these NYC anthemic punks who caused a stir in the late '90s and released debut album Bazooka!!! on Capitol records in 2003. You may remember their "whoa-oh"-laden single ""Which of the Two of Us is Gonna Burn This House Down?".

'Nufonia Must Fall' featuring Kid Koala, The Afiara Quartet @ BAM
With help from a team of puppeteers and the design team behind Her and Lost in Translation, Kid Koala adapts his own 2003 graphic novel Nufonia Must Fall as a live stage silent film. Part of BAM's Next Wave Fest.

BAIO (of Vampire Weekend), Paul Raffaele @ Rough Trade
Vampire Weekend's BAIO releases his debut solo LP this week on Glassnote, and it's not too far removed from the stuff his main band does. See for yourselif tonight.

Tommy Keene, Dot Dash @ Bowery Electric
Tommy Keene has been making jangly, post-Big Star power pop since the early '80s when songs like "Places That Are Gone" and "Run Now" were staples on collage radio. His new album is called Laugh in the Dark was just released and finds his pop sensibilities still intact.

On An On, Eliot Sumner, Dosh @ Baby's All Right
Dreamy Minneapolis band On an On released new album And The Wave has Two Sides back in July.

Helmet @ Stone Pony
Alt-metal boundary pushers Helmet have been playing their 1994 album Betty in full on tour. They already hit NYC three times this year, and this leg of the tour has them nearby at NJ (tonight) and Long Island (tomorrow).

The Thurston Moore Band @ WFMU Monty Hall
We still miss Sonic Youth, but that itch gets scratched pretty well by Thurston's current band which features his SY bandmate Steve Shelley and My Bloody Valentine's Deb Googe. Their tour hit NYC last month, and tonight it's nearby in Jersey City.

GWAR, Butcher Babies, Battlecross @ The Paramount
GWAR are sadly without Oderus Urungus, who passed away last year, but they still put on shocking, hilarious, gruesome shows. Their current tour doesn't hit NYC but tonight it's nearby for this Long Island show.

"Tree of Codes" w/ Wayne McGregor, Olafur Eliasson, Jamie XX @ Park Avenue Armory
Choreographer Wayne McGregor and visual artist Olafur Eliasson have a new ballet called Tree of Codes and the music for it was done by Jamie xx, who's having an incredible year thanks to his very well-received new album In Colour. The ballet runs from September 14-21.