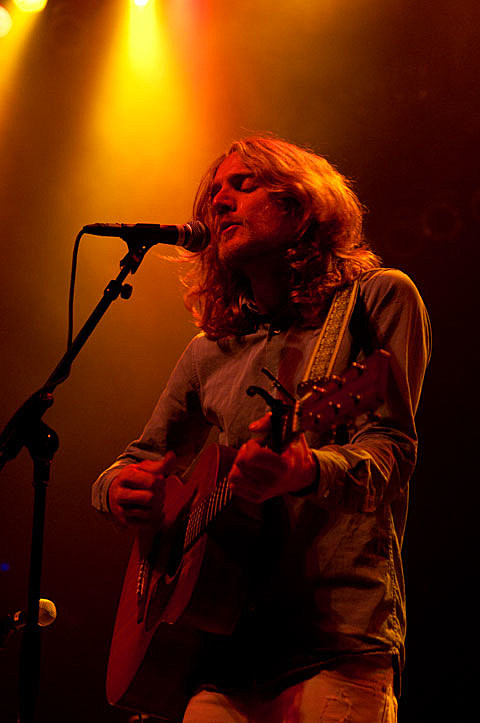 John Grant, Ezra Furman, Georgia, Shopping @ Rough Trade (FREE)
This is Rough Trade's day party, highlighted by an intimate performance by John Grant, but the rest of the bill is great too.

The Front Bottoms, The Smith Street Band, Elvis Depressedly @ Irving Plaza
It's not part of CMJ, but BV is presenting The Front Bottoms' two-night stand at Irving Plaza with The Smith Street Band and Elvis Depressedly. They just released their major label debut, Back On Top, and it's actually more subdued than their previous material. This is night 2 of 2.

Dungen, Quilt @ Baby's All Right
Mexican Summer is presenting this double bill featuring Sweden's Dungen who haven't played NYC in a long time, and Boston-area band Quilt who are always worth catching. Sold out, but limited CMJ badges will be accepted. Get there early.

Panda Bear, The Present, Kaitlyn Aurelia Smith, Deakin (DJ Set) @ Bowery Ballroom
Panda Bear's new album does what Panda Bear does best -- futuristic psychedelic pop with a lot of Brian Wilson influence -- but it's a clear progression from his earlier work too. Tonight he wraps up a sold-out three-night run at Bowery Ballroom.

Kamasi Washington, Nir Felder, Takuya Kuroda, Dessy Di Lauro, Kris Bowers, Ben Williams & Sound Effect @ Bric House
Jazz musician Kamasi Washington has been having a pretty busy year. He appears on Kendrick Lamar and Thundercat's new albums, and he also has his own, The Epic, out on Flying Lotus' Brainfeeder label (Thundercat features on that album too).

Wax Idols, Flowers of Evil, Decorum @ Acheron
If you wear black on the outside because black is how you feel on the inside, you should head to Acheron tonight for a gothy bill headlined by San Francisco's Wax Idols (who played our official showcase last night). Flowers of Evil features members of Crocodiles and A Place to Bury Strangers, and Decorum is the new band from Leif of Orca Team.

Protomartyr, Strange Wilds, The Gotobeds, Mass Gothic @ Knitting Factory
This is the Sub Pop / Hardly Art official CMJ showcase headlined by Detroit's mighty Protomartyr, fresh off the release of their acclaimed third album, The Agent Intellect. Tour buddies The Gotobeds are also on the bill, as are the Nirvana-y Strange Wilds, and Mass Gothic (ex-Hooray for Earth). H Jon Benjamin, who you may know from Bob's Burgers or Archer, hosts the night.

"Fable" @ Knockdown Center
Some of you may remember "Debut," the ambitious, large-scale production by Derrick Belcham (La Blogotheque) and choreographer Emily Terndrup (Sleep No More) that happened last year at The Knockdown Center and featured music by Porcelain Raft's Mauro Remiddi, Julianna Barwick and more. Those folks are teaming up again for another large-scale production that again merges independent music, immersive dance theater and large-scale art installation, titled "Fable."

Tobias Jesso Jr., Wet @ MHOW
You can spend your time watching TJJ picking his songs apart if you want -- there's Carol King, there's Harry Nilsson, there's Randy Newman, there's the Cheers theme song -- which is even easier to do when it's just a man and an electric piano. But Jesso is a pretty charming guy with self-effacing humor, and the heart-on-sleeve lyrics clearly connect with his audience who are usually either singing along loudly or pin-drop quiet.

Michael Rault, Cool Ghouls, Dirty Ghosts, Slim Twig, Modern Vices, Howardian, Unstoppable Death Machines @ Palisades
During CMJ, Palisades is a destination -- not a lot of other clubs to hop around to nearby -- but they've got a stay-put lineup tonight, presented by the folks at Burger Records, including the one-of-a-kind Slim Twig, San Francisco's garage Cool Ghools, and Michael Rault.

Beggars Party w/ Car Seat Headrest @ Elvis Guesthouse
After releasing a ton of releases on bandcamp that were loved in certain indie rock circles, Car Seat Headrest inked a deal with Matador. He's definitely one of the more talked-about artists at CMJ this year.

Glass Animals, Empress Of @ Terminal 5
We're most excited about opener Empress Of, whose synthpoppy debut album Me is definitely one of the better releases of the year.