photo: Majical Cloudz at 50 Kent in June (more by PSquared) 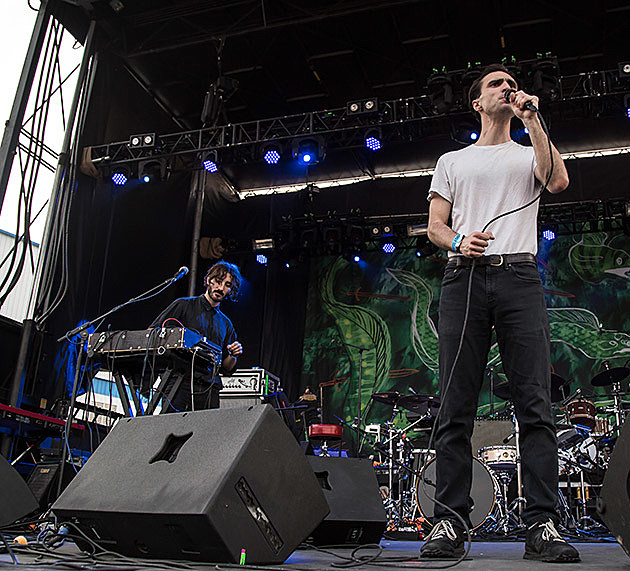 Telekinesis, Say Hi @ Bowery Ballroom
Telekinesis went synthpop, in a Postal Service kind of way, for their new album, Ad Infinitum, and the sound fits them just fine. They also fit just fine with openers Say Hi, who have a new album (Bleeders Digest) as well.

Old 97's @ Brooklyn Bowl
One of the bands to emerge from the '90s, alt-country scene, Old 97's are still a force today and frontman Rhett Miller maintains that youthful exuberance (and razor-sharp wit).

Windhand, Danava, Monolord @ Gramercy Theatre
Windhand don't deviate too much from the stoner/doom metal formula that's worked since Sabbath's early days, but they do inject a helluva lot of melody, an element a lot of their peers tend to skip out on. This year's Grief's Infernal Flower on Relapse is pretty great, and this show is sure to be too.

Kylesa, Inter Arma, Indian Handcrafts, Irata @ Saint Vitus
Between the Danzig show, the Windhand show, and this, it really is a tough night to be a metal fan in NYC. Two bands who bring a strong psychedelic element to the genre, Kylesa and Inter Arma, team up for this. And the sludgy Indian Handcrafts are absolutely worth catching too. Opening the night is Irata, who are signed to Kylesa's label.

Majical Cloudz, She-Devils @ National Sawdust
We're hoping this is one of National Sawdust's "standing" shows as the room works great with the audience basically surrounding the performers, which should make for good bonding with Majical Cloudz's intense, personal style. Do get there early to catch Montreal's She-Devils who use a lot of interesting '50/'60s rock and R&B samples for their post trip-hop, neon-lit sound.

Leon Bridges, Kali Uchis @ Apollo Theater
Motown-inspired Texan Leon Bridges has blown up in short order thanks to his debut album that sounds like it coulda been made in 1964 and his energetic, charismatic live shows.

Boys Life, Josh Berwanger (of The Anniversary) @ Music Hall of Williamsburg
The '90s-emo band reunions keep coming, and the newest one is Boys Life. The short-lived Kansas CIty band only had two full lengths, including 1996's great Departures and Landfalls which was just reissued on Topshelf, but they proved to be pretty influential. Opening is another veteran of the genre with his new solo project, Josh Berwanger.

Joe Jackson @ Town Hall
Joe Jackson's new album, Fast Forward, was originally conceived as a series of four EPs, each side of the double album was made in a different city with different musicians: New York, Amsterdam, Berlin and New Orleans. Be that as it may, it's a cohesive record that shows Joe Jackson's songwriting chops are still in fine form.

Mark Knopfler @ Beacon Theater
Dire Straits' Mark Knopfler helped create a guitar sound that ended up being very influential (at least to The War On Drugs) and still sounds great today. Earlier this year he released a new album, Tracker.

Krill @ Shea Stadium
Fans of the Northeast DIY scene may be bummed out to learn that Krill are calling it quits, but they're playing a few goodbye shows first. This is the first of two in NYC.