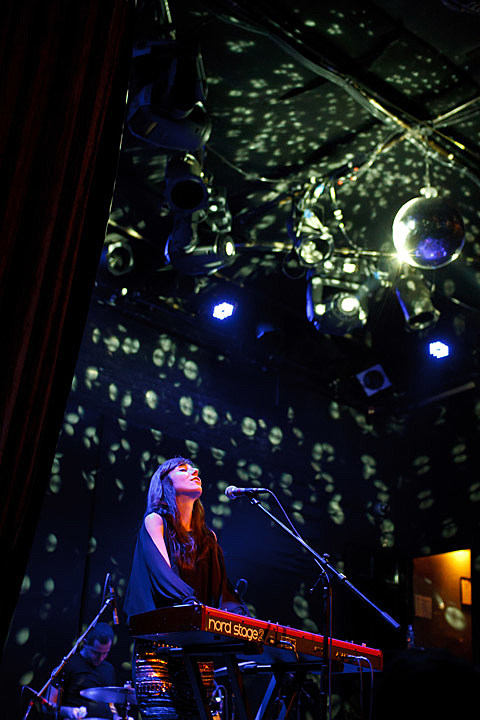 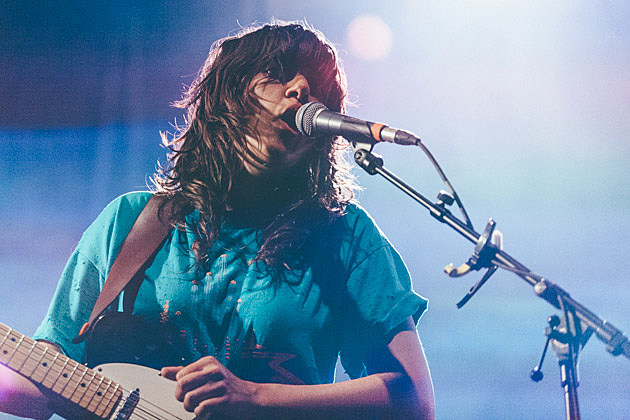 Julia Holter, Motion Graphics @ Rough Trade
Julia Holter continues to progress, and her newest album Have You In My Wilderness has some of her biggest-sounding, most accessible music yet. But it also still has plenty of the more avant-garde leanings she's had throughout her career. Tonight's show should be a great one.

Courtney Barnett, Widowspeak @ Baby's All Right
Courtney played Baby's All Right's second day in business (part of a BV CMJ 2013 day party) so it's nice to have her back in in such a cozy space -- especially given her last two shows were headlining Terminal 5 over the summer and opening for Blur at MSG last night. This show, which features Widowspeak opening, was available exclusively to Jukely members and is sold out, natch.

Neon Indian, Porches, Special Guest @ Baby's All Right
Following Courtney Barnett is the second big "Baby Turns 2" parties celebrating the venue's second anniversary. Neon Indian just headlined Webster Hall, so this is also a treat. Any guesses on who tonight's "special guest" is? In any case, sold out.

Here We Go Magic, Big Thief, Aerial East at Bowery
Eno/Cale's Wrong Way Up and Roberty Wyatt's Shleep were touchstones for the the new HWGM LP according to main man Luke Temple, who adds that most of the songs are "overtly major and optimistic." It worked out well: Be Small is the band's most winning set songs in a while, and danceable too.

Peaches, Deap Vally
An innate provocateur and showman, Peaches shows are always something to behold. Maybe Kim Gordon will stop by for her part on "Close Up" from Peaches' new album, Rub?

Garbage, Torres @ Kings Theatre
Twenty years ago, Garbage released their debut album of electronics/sample-driven alternative rock, and it still sounds great today. They're celebrating its 20th anniversary by playing it in full on tour, and this is the second of two NYC-area stops. If you like the kind of alt-rock that was popular in Garbage's prime era, you'll dig opener Torres too.

Disclosure, Claude VonStroke, Pomo @ Madison Square Garden
Disclosure made quite the impact with their 2013 debut, Settle, which has spawned countless imitations over the past couple years. This year's Caracal may be a bit of a sophomore slump, but the live show will still likely be a huge party. And "huge" is no understatement: this is their MSG debut.

Glasser, Jonathan Turner @ The Kitchen
Art pop musician Glasser (aka Cameron Mesirow) and local artist Jonathan Turner are presenting their new piece Charge at The Kitchen. The description reads: "Through a program of vocal and movement performances by Glasser and accompanying visuals by Turner, the audience will experience the body as a show. Performer and audience will be enveloped in a sensory macro-environment. Visuals will be abstract yet microscopically tactile. Sounds will feel spatially personal, as if Cameron is whispering directly in your ear. The effect will be performance as an intimate yet exotic embrace." This is night 2 of 2.

John Doe & The Sadies, Teri Joyce & the Tagalongs @ Hill Country BBQ (Manhattan)
X frontman John Doe and Canadian band The Sadies teamed up in 2009 for the album Country Club. They're re-teaming for shows this weekend at branches of Hill Country BBQ.

TEEN, Ava Luna, Jo Firestone @ Saint Vitus
Brooklyn's TEEN went from proggy indie rock on their first album to neo-R&B on their second. What will LP3 be like? Maybe get some insight tonight on this stop of their tour with Ava Luna. 'Punderdome 3000' host Jo Firestone opens the show.

Night Beats, Nots, The Golden Grass, The Jeanies
...and meanwhile, around the corner at The Wick, it's Seattle's Night Beats and Memphis synth-punks NOTS. This one will be a good show.

Steve Gunn, James Elkington, Nathan Salsburg, Mind Over Mirrors
This is the second show of Steve Gunn & James Elkington's two-night stand at Union Pool. Former labelmates, a little cross-pollination during sets is probably not out of the question.

John Davis & the Cicadas, Franklin Bruno & The Human Hearts, Brice Randall Bickford
Fans of '90s indie rock/pop take note as this show has John Davis of Sebadoh and The Mountain Goats (but not KORN), plus the wonderful Franklin Bruno (Nothing Painted Blue, Human Hearts).

milo, Bald Afro, Safari Al, Premrock, Curly Castro, Big Breakfast, Ehiorobo, Kenny Segal @ Shea Stadium
It's a great year for mainstream rap, but if you need a break from that, milo's new abstract rap album so the flies don't come could be exactly what you're looking for. Catch him live tonight.

So Hideous, Black Table, Planning For Burial, Barbarian @ ABC No Rio
So Hideous combine the type of atmospheric black metal that's been popular in certain circles lately with a strong classical-inspired orchestral side. Their new album Laurestine is interesting stuff and this is the release show. If you're going, don't miss doomgazer Planning for Burial.

Cyril Hahn, HNNY, Tornado Wallace, Kenton Slash Demon, Jacques Renault, Chrome Sparks (DJ), Touch Sensitive, JDH & Dave P, Future Classic DJs @ Good Room
If you like Disclosure but don't want to be at the massive Madison Square Garden tonight, you might like catching Cyril Hahn at Good Room. He's on PMR, the same label that helped launch Disclosure's career, and his sound isn't a million miles away from theirs.

Kacey Musgraves, Sugar & the Hi Lows @ The Apollo
Pop country has been having a bit of a crossover moment into the indie world lately, and Kacey Musgraves is one of the leading artists that's been part of that. For good reason -- this year's Pageant Material is pretty undeniable.

New Found Glory, Yellowcard, Tigers Jaw @ Playstation Theater
We don't recommend catching either of the co-headliners at this show, but we couldn't not mention that Tigers Jaw are back in NYC tonight. Their mopey indie-emo album Charmer was one of our favorites of last year.