photo: The Darkness in Austin, 2012 (more by Tim Griffin) 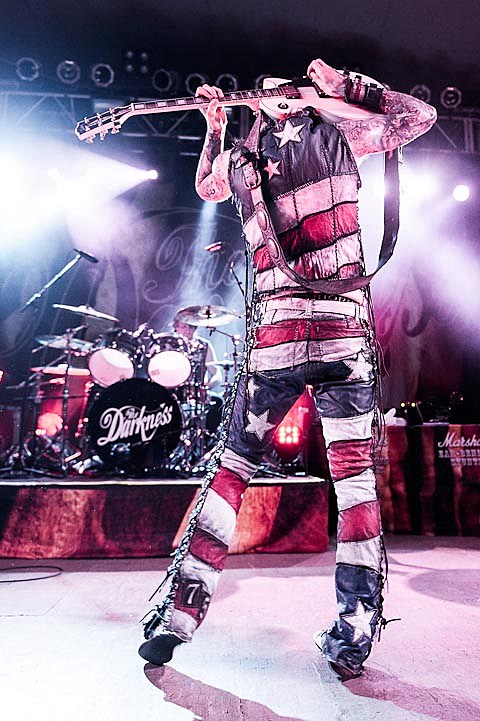 The Darkness, These Raven Skies @ Irving Plaza
While the band have yet to top their 2003 debut, new album Last of Our Kind brings back a little of the saucy fun that first LP had. Live, though, The Darkness remain pure bombastic spectacle, with a show full of riffs, flying leaps, guitar windmills, multiple solos (one of which may be performed on the shoulders of a roadie as he mingles with the audience) and unbridled bravado.

The Drums, Froth @ Baby's All Right
This is the first of three residency shows at Baby's for The Drums, all of which feature the return of Connor Hanwick to the lineup. Tonight is sold out.

The Polyphonic Spree, Corn Mo, Marrow 95 @ Highline Ballroom
The many-membered and perfectly-named Polyphonic Spree are turning 15 this year, and to celebrate they're playing their excellent 2002 debut, The Beginning Stages of..., in full on tour. They're also promising "deep cuts and choice covers."

Holly Gollightly & The Brokeoffs, Hayley Thompson-King @ Knitting Factory
Onetime Thee Headcoatees member and prolific artist in her own right Holly Golightly is having an especially busy year, having released two albums in the second half of 2015. Tonight's show is with The Brokeoffs (aka her multi-instrumentalist husband Lawyer Dave).

Laced, The Men, The Funs, WALL @ Shea Stadium
After a hiatus, The Men appear to be back in full swing and testing out new material at smaller shows like this one. Tonight's officially the record release party for Laced's debut 7".

Misfits (performing Walk Among Us and Earth A.D.), She Demons @ Playstation Theater
If you want to see songs Danzig wrote performed at Playstation Theater, he just did that last week! But tonight you can see that once again, only this time played by Jerry Only's version of the Misfits.

Carrie Brownstein (book reading) with Questlove @ Saint Vitus
Sleater-Kinney and Portlandia's Carrie Brownstein releases her new memoir, Hunger Makes Me A Modern Girl, today, and she's celebrating it with a book tour. This is the first of two NYC stops (tomorrow she's at Barnes & Noble in Union Square), and Questlove will be in conversation with her at this one.

David Duchovny @ Webster Hall - Marlin Room
In the brief downtime from plugging the upcoming X-Files miniseries, David Duchovny is here to let you know "the songs are out there." Not having Bree Sharp open this show seems like a missed opportunity (at least for Bree!).

Cake Shop Comedy @ Cake Shop
If you miss Big Terrific and Hannibal Buress' Sunday night show at Knit, and are looking for a new free, weekly comedy show that happens in a rock club and sometimes has big name talent stop by unexpectedly, "Cake Shop Comedy" might do the trick. Tonight features Phoebe Robinson, The State's Kevin Allison, Ben Kronberg, and more.