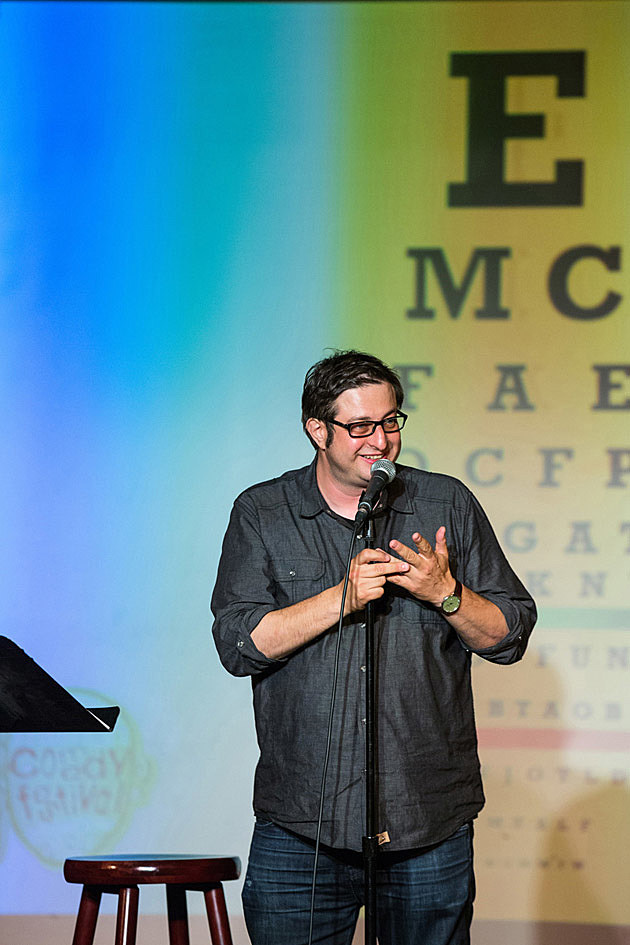 Eugene Mirman, Derrick Brown, H. Jon Benjamin @ Bell House
This is the release party for Eugene Mirman's sprawling, awesomely weird 7-LP comedy box set, I'm Sorry (You're Welcome). If this show is half as kooky as the box... it could be an interesting night.

Voice Coils, Crown Larks, Parlor Walls, Soft Spot @ Aviv
Voice Coils' most notable member may be vocalist Mitski, who isn't usually playing live with them these days, but their unique proggy sound is quite the experience either way.

Big Freedia, Hibou, Boyfriend @ Irving Plaza
New Orleans' queen of bounce Big Freedia is more popular than ever, thanks in part to her Fuse show (season 4 recently premiered), but her live shows are still where it's really at. They're total parties.

Cypress Hill, Immortal Technique, DJ Eddie B Swift @ Playstation Theater
Veteran rap group Cypress Hill have made a tradition out of playing Halloween-time shows in and around NYC, and they'll do that again this year. Halloween proper is in Asbury Park but they'll be in Times Square tonight. Their old pal Immortal Technique opens.

Expert Alterations @ Rough Trade
Baltimore's Expert Alterations look and sound like they're straight from 1986's UK indiepop scene (we're talking C-86 here), and their debut album, You Can't Always Be Liked, is a scrappy, catchy good time. They celebrate tonight with this free early show that leads perfectly into...

Go Deep, Fashion Week, Good Grief, The Netherlands @ Saint Vitus
There are a few cool bands on this bill, headlined by local hardcore act Go Deep who recently signed to 6131.

Gary Clark Jr., Black Pistol Fire @ Terminal 5
Gary Clark Jr plays blues rock rooted in the genre's early days, and it continues to catch on with a lot of people. Tonight he takes on the massive Terminal 5.

Dances (as T.Rex), Jangula (as David Bowie), Heliotropes (as Tom Petty and the Heartbreakers), Piers (as Fleetwood Mac), and Stringer (as The Smiths) @ Alphaville
Start your Halloweening early with this show featuring a whole lot of bands pretending to be other bands.

Emo Halloween covers show @ Matchless
Washed Up Emo and Bye Week Productions are presenting this cover show with sets of Saves the Day (Stay What You Are in full), The Get Up Kids, Weezer and Guided by Voices. The lineup includes members of Field Mouse and more.

Phil Lesh & Friends @ The Capitol Theatre
While Phil's Grateful Dead bandmates and John Mayer are about to play three MSG shows, he'll be keeping things in a smaller venue (and without John Mayer) for six nights at The Cap. This is the first.

Portland Cello Project @ Littlefield
The PCP turns contemporary pop into classical jams your uptight uncle would like. Their most recent album was a tribute to Elliot Smith.

Richard Lloyd (of Television), New York Junk, Faith @ Bowery Electric
As original guitarist for Television, Richard Lloyd helped define the mid-'70s Bowery rock scene. The block may not look like what it used to in the heyday of CBGB, but he's still a master of his instrument.

Motion Studies (as Hall & Oates), Fielded (as Kate Bush) @ Union Pool
Motion Studies' soulful dancepop probably owes more than a little to Hall & Oates, so it's fitting they'll be performing as that duo for this Devil's Night show. Same for Fielded as Kate Bush.