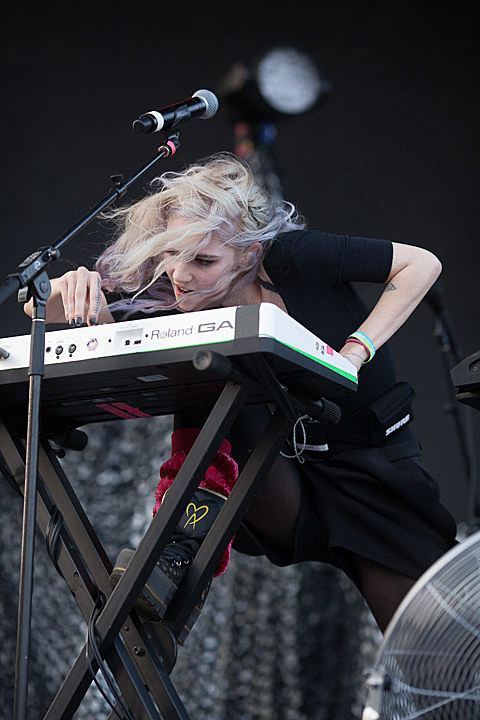 Grimes @ Guggenheim Museum
Grimes' highly anticipated new album finally drops this week. So far we heard one song that's pretty close to mainstream pop and another that's nothing like pop at all. We don't know what else to expect from this album, but maybe we'll learn more tonight.

Jennylee, Young Magic @ Baby's All Right
Warpaint bassist Jenny Lee Lindberg doesn't stray too far from her band's dark, slinky sound on her solo debut, right on!, which is out in December. Get an early taste tonight.

Tribulation, Occultation @ Saint Vitus
The stacked Deafheaven / Envy / Tribulation tour hits NYC's Webster Hall tomorrow, but tonight's an off night and Tribulation are headlining their own show at Saint Vitus. Their new album is a killer mix of black and death metal influences with classic rock riffage and some genuinely catchy songs.

Envy, So Hideous, Edhochuli, Driftoff @ Black Bear Bar
This show has a special guest headliner, and we're hearing it's someone to legitimately be excited for. UPDATE: It's Japanese screamo greats Envy. The undercard is pretty stacked too with atmospheric black metal locals So Hideous, Pittsburgh's proggy post-hardcore band Edhochuli, and Rosetta/Junius/City of Ships-related ragers Driftoff.

Jaye Bartell Record Release, Will Stratton, June West @ Union Pool
Jaye Bartell has been making music since the mid-'00s and you may have seen him open shows for Jessica Pratt or Angel Olsen recently. His sonorous voice fits well with his dark, dusty, folky songs, as can be heard on 2013's Loyalty which just got reissued by Captured Tracks-related label Sinderlyn. He celebrates that reissue tonight.

Antibalas, Saul Williams, EMEFE @ Brooklyn Bowl
Brooklyn afrobeat band Antibalas are on the second show of their four-show, month-long residency at Brooklyn Bowl tonight. Each has different guests, and tonight it's Saul Williams and EMEFE.

The Districts, Lady Lamb, Sun Club @ Music Hall of Williamsburg
Rootsy rockers The Districts headline this show, and if you're going we especially recommend catching Lady Lamb. She's ben consistently great for a while, but this year's After is a noticeable step forward.

Laraaji, Headaches, Foxes in Fiction, James Place @ Trans-Pecos
Influential ambient musician Laraaji has been doing some reissues this year, including a just-released pressing of his Brian Eno-produced 1980 album, Ambient 3: Day of Radiance. The show's presented by the Human Pitch label, whose Landon Speers (aka Headaches) is on the bill. And two newer ambient musicians, Foxes In Fiction and James Place, open.

Midnight North w/ Phil Lesh @ SOB's
The Grateful Dead's Phil Lesh had one 3-night run at the Capitol Theatre this past weekend and he does another this coming weekend. He's got time to kill in between, so tonight he's joining his son Grahame's band Midnight North for a few songs at their SOB's shows.